PoP’s resident oral historian Nien Yuan Cheng attended a screening of Jason Soo’s documentary 1987: Untracing the Conspiracy on 11 February 2017 at The Projector in Singapore. This is a film about 1987’s Operation Spectrum, where 22 people, accused of being involved in a ‘Marxist Conspiracy’ to overthrow the government, were detained without trial under Singapore’s Internal Security Act (ISA).

In 1987: Untracing the Conspiracy (the 54-minute version, rated R21), director Jason Soo splices two different kinds of scenes: group interviews with the ex-detainees who agreed to be in the film, and archival footage regarding the mass arrests. These scenes are occasionally punctuated by contextualisations in the form of intertitles, at times devastating/necessary and at times a little on-the-nose (e.g. telling you what to pay attention to or what to feel instead of letting audiences draw their own conclusions). This formula seems simple, and it is, but it is also effective.

As the ex-detainees retell their experiences in state detention without trial, the camera’s frame focuses not merely on their ‘talking heads’, but on their whole upper body. As such, every gesture can be appreciated. This is important because oral history interviews such as these are not merely verbal recountings of ‘what happened’, but a bodily materialisation of experiences as lived.

Vincent Cheng repeatedly whips his forearm across the frame; Chew Kheng Chuan rises slightly in his seat, pumps his arms as if he were running in place, and slashes his palm across an imaginary face; and Low Yit Leng maps the interrogation room with her fingers. These performative re-enactments evocatively tell the audience what they have been through more effectively than any verbal description. This is one of the main reasons why this film plays a role in educating the public about Operation Spectrum in a way that books, websites or articles sometimes can’t.

Many of these accounts are heartbreaking, but the overall tone of the film isn’t. As I see it, the purpose of this film is not to tug at heartstrings or generate sympathy for the former detainees. Jason Soo dedicates a significant portion of the film to an extended scene where Chew Kheng Chuan jovially retells and performs the horrifying night of his arrest to the others in the interview. For instance, he describes leisurely taking a shower and putting on a suit and tie while the police were banging on his door just so that when they took his mug shot, he wouldn’t look as “deranged” – his word – as his fellow detainees. This is a powerful performance. As these detainees laugh together, they subvert narratives of victimhood. They show exactly how ridiculous the situation was both then and now, and indeed redress the power imbalance between them and their detainers, which Soo has indicated is one of the aims of this film.

After the film screening, we had some time to ask Soo and Vincent Cheng some questions. Cheng is an ex-detainee who became branded as the main ‘Marxist conspirator’ based in Singapore by the government and was coerced to confess on prime-time television his ‘intention’ to cause rioting and bloodshed. One of the pieces of evidence the Internal Security Department claimed to prove this intention was the fact that Cheng, as a Catholic social worker at the time, conducted a seminar about poverty in Singapore. 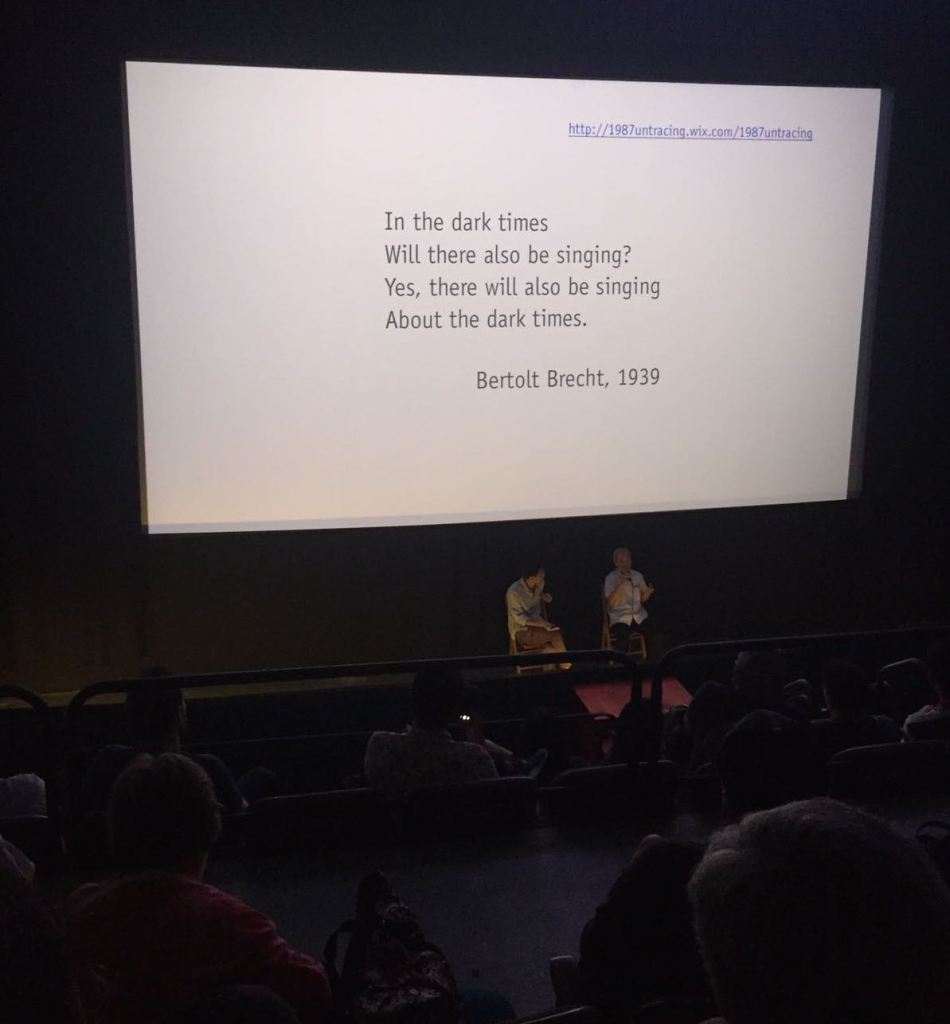 Q&A with Soo (left) and Cheng (right). This quote by Brecht, an important theatre-maker, lifelong Marxist and political dissident, is an interesting choice indeed.

Cheng is understandably angry at the fact that the Internal Security Act is still very much intact in Singapore, having spent more than three years in detention (most of the time in solitary confinement) without trial. Amnesty International had recognised him as a ‘prisoner of conscience’. That said, his bearing is remarkably serene. During the Q&A, we learned that in order to stay sane in prison, he memorised a book on foot reflexology by heart and performed massages on himself. After his release, his freedom was curtailed for another five years; he was essentially under house arrest and could not fraternise with his fellow detainees or his churchmates, much less talk to the press about ‘what really happened’.

Admittedly, answers to questions like ‘what really happened’, and the concept of historical ‘fact’ or ‘truth’, are complex. But that is precisely what many Singaporeans need to understand: that one should critically engage with history instead of accepting the current narrative as definitive. Many would agree that Singapore’s apathy towards this kind of engagement is a product of deliberate strategy and policy-making and not ‘natural ignorance’. In the media, for instance, The Straits Times published a statement after Lee Kuan Yew’s death in 2015 from Archbishop William Goh about how revisiting Operation Spectrum holds no purpose for nation-building and that it was time to “move on”. The makers of 1987: Untracing the Conspiracy obviously disagree. Giving voice to these detainees does not entail mayhem or social anomie, but is one way Singapore becomes a more historically aware and mature nation moving forward.

Indeed one could say that Operation Spectrum is one of the main reasons why Singapore, as a nation, is so politically disinclined. After the crackdown, Singapore lost a whole generation of social and civic activism, which is only slowly starting to emerge again thanks to social media. While this 54-minute version of the film itself did not formally put forth a historical thesis or argument about Operation Spectrum (rather it focused on the ex-detainee’s personal experiences), my understanding is that a future version of the film will cover the issue more extensively as well as highlight the historical repercussions of this event with the benefit of hindsight.

When Tan Pin Pin’s To Singapore With Love (a documentary and oral history about Singapore’s political exiles) was banned from distribution or screening in Singapore, there was a public outcry – at least on Facebook. Let us be the judge, the comments lamented. Let us be the judge of whether this narrative is or isn’t historically sound. By banning it altogether, the Media Development Authority took away that opportunity for Singaporeans to engage with and critique such narratives vis-à-vis The Singapore Story. My hope is that Singaporeans will be able to have this opportunity with 1987: Untracing the Conspiracy when the full-length version is released.

Note: This post was edited to reflect that the restricted conditions Cheng experienced after his release from prison was not over a span of three additional years but five.