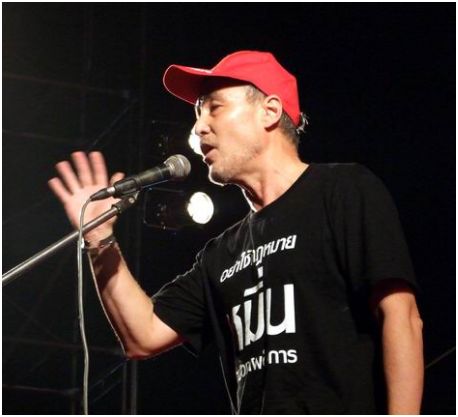 Received by email from Ji Ungpakorn:

University authorities in Thailand have sunk to even lower depths in the destruction of academic freedom. This week a student from Kasetsart University, in Bangkok, was arrested and jailed under the draconian lèse majesté law for posting a comment on the internet. The use of this law and the associated censorship is bad enough, but what is an absolute disgrace is the fact that it was the Deputy Rector of Kasetsart University, Nipon Limlamtong, who filed charges against the student with the police. Nipon has special responsibility for student activities. In other words he is there to enforce censorship and prevent academic freedom in the university.

This is not the first time that Thai universities have behaved like this. I had to leave Thailand in 2009 because I wrote a book criticising the 2006 military coup. I said the coup received legitimacy from the King and I raised the question of whether or not the Thai King should defend the constitution and democracy. Again, it was the management of Chulalongkorn University, where I worked as a politics lecturer, who gave my book to the police special branch. In my opinion it is impossible to write a book criticising the coup without trying to discuss the role of the and any politics academic who ignores or supports military coups is not fit to teach students in a politics department. I was charged with lèse majesté for “insulting the King” which I did not do, but this law was used against me because I opposed the military coup. Since the coup, there has been a dramatic increase in the use of the law to try to silence the opposition. Many Red Shirt activists are languishing in jail on lèse majesté charges and Dr Somsak Jeamteerasakul from the history department at Thammasart University is also facing the threat of lèse majesté.

Time is rapidly running out for the newly elected government of Yingluk Shinawat to show that it is serious about democratic reforms. This government only won the election because of the struggles and sacrifices of Red Shirts. It is time to scrap the lèse majesté law and end censorship of all kinds. Political prisoners must be immediately released and all charges dropped. The head of the army should be sacked and the generals and politicians who ordered the killings of unarmed pro-democracy Red Shirts last year must be brought to court, just like Mubarak in Egypt.

As for the international academic community that makes a living from studying Thailand, I pose these questions: How many of you are going to remain silent about the destruction of academic freedom in Thailand so that you can continue to travel to Thailand? When will the majority of foreign academic follow the lead of those principled academics outside Thailand who have already made a stand against lèse majesté? Is it time to boycott institutions like Kasetsart and Chulalongkorn Universities until they change their ways? Will any of these issues ever be discussed at international conferences on Thailand?