With Suthep’s “Shutdown-Bangkok” operation starting tomorrow, the political situation in Thailand is heading toward its most vulnerable point in decades. The chief commander of the army, General Prayuth Chanocha, has refused to rule out a military coup, making the possibility of a coup becoming more and more real. Seeing how the situation is evolving, it is not too difficult for one to foresee how Thailand can go down the abyss, drifting into a long period of heightened conflicts and violence. The absurdity of the current time in Thailand begs for someone to stand up and bring back some sense to us.

Thankfully, we are not without people who are against the current madness. The past week has seen numerous groups, most of whom are based in prominent universities, organising the “candle lighting” activity as the symbol of their opposition to Suthep&COs and their support for the rights for democratic election (see here and here). 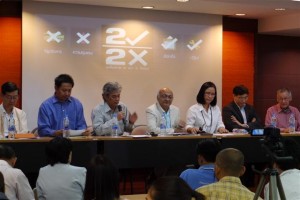 A highly significant move was also initiated among the academics, NGOs, and political activists. On January 10, a network called “2 Yeses 2 Nos” was announced. What is distinctive about this coalition is the way that it comprises of prominent personnel from different arrays, many of whom have been previously perceived to hold different standpoints, particularly in relation to the Thai politics. The “2 Yeses 2 Nos” network includes progressive academics from the Assembly for Defense of Democracy such as Kasian Tejapera and Puangthong Pawakapan, leading Thai economists from TDRI such as Somkiat Tangkitwanich and Ammar Siamwalla, and the famous names from the NGOs and people’s sector such as Jon Ungpakorn, Dr.Somsak Chunharat (Thai Health Foundation) and Angkana Neelapaichit. The group also enjoys supports from the influential figures such as Seksan Prasertkul and Chaiwat Satha-anan, and from movements such as the Assembly of the Poor and P-Move.

The “2 Yeses 2 Nos” slogan refers to the ideas that the people in the network have at least in common. “2 Yeses” refers the two things that they support, namely the “rights to have democratic election” and the “need for reform to occur democratically”. “2 Nos” points to their opposition to any “military coup” and any form of “violence”. Reflecting on the current situation, Seksan Prasertkul argues that any kind of reform needs to be undertaken within democratic rules; he states that:

“In order to create any significant improvement to our society, we need to be careful. We must not resort to any non-democratic means, as doing so will not attain consensus in the society. Even if such an attempt is based on a good intention, it would still leads to violence and uncompensable losses”.

Jon Ungpakorn adds that the current situation is perhaps the most dangerous one that Thailand has ever faced since he was born. He begs for the Thais to remain within the rules that we have, saying:

“We are currently encountering the conflict between; 1) those who do not trust elections and wants the reform to happen before any election; and 2) those who still want to act according to the rules that we have, seeing that having no common rules to respect would mean any one can use their own rules, leading to violence.”

The position held by the 2 Yes 2 No network is simply the sensible one to have. It is really telling that, in the Thai society at the present, we really need to ask people to consider such a position. This is, as Chaiwat Satha-anan pointed out during the announcement of the 2 Yes 2 No network:

“If someone asks me what the most worrying thing is, I would say that — at the moment — many people do not want others to lose hope in the Thai society. This is because, without hope, violence will happen”.

It is my hope that the voice expressed by the 2 Yeses 2 Nos network would be heard by a substantive number of the Thais, and that they would positively respond to it. Even if the current situation may turn to the worse, I hope that any bad thing to occur would at least have the opposite effect of galvanising many of us together, and also pressing others to think more about the troubles in which we are in. If there is anything that I would wish for, it is that the current tragedy would very soon turn into merely a meaningful lesson, rather than being the start of an era of downfall.