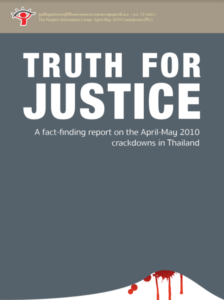 On the 7th anniversary of the 2010 government crackdown on the Red Shirts, People’s Information Center for the April-May 2010 Crackdowns (PIC) has released an English-language edition of its original 1,398-page long fact-finding report, available for free download.

PIC is a civil society group consisting of human rights activists, lawyers and academics, whose main mission was to document what occurred during the 2010 government crackdown on the Red Shirts in the streets of Bangkok.

Truth for Justice, the original fact-finding report of the PIC, was published in Thai in 2012, two years after the crackdown on the Red Shirts by the Abhisit Vejjajiva government, which resulted in over 90 deaths and 2,000 injuries. The report came out amidst growing criticisms towards the workings of the two major fact-finding bodies: the government-initiated Truth for Reconciliation Commission of Thailand (TRCT), headed by Kanit Na Nakorn; and the controversial National Human Rights Commission, chaired by Amara Pongsapich.

The aim of the PIC original fact-finding report is to document what occurred in the crackdown. PIC believes that this is the first step to ending the deeply-entrenched culture of impunity in Thailand.

The English-language edition, consisting of six selected chapters from the original report, with added clarifications, is produced in the hope that it will stimulate a wider global discussion on truth, justice and reconciliation in the deeply-divided Thai society, and perhaps elsewhere.

Kwanravee Wangudom is a former lecturer at the Institute of Human Rights and Peace Studies, Mahidol University. She is the Editor of the English-language edition of the PIC report.