Playing the market in rice – an update

Last year I reported that a new dry season crop had been taken up in Baan Tiam (the village in Chiang Mai province where I have been working for several years). The new dry season crop was the old wet season favourite – rice. At the time (February 2007) I wrote:

Visiting a couple of weeks ago I was interested to see that a new dry-season crop was being tried – rice. Baan Tiam’s farmers are avid rice cultivators during the wet season but I had never seen it grown in the dry season. Two reasons were given for this innovation. First, flooding during the wet season had destroyed a lot of the rice crop. But flooding here is a regular event and perhaps even more important was the high price of rice. Those who had lost rice were reluctant to buy their rice from local suppliers, who were selling milled rice for up to 17 baht per kilogram. And even some of those who had not lost their rice thought that the high price represented an opportunity for a healthy cash sale.

It will be interesting to see if this catches on. I suspect not. Baan Tiam’s irrigation water supplies this year seem more than adequate. But this is not always the case and I have seen years when the stream running through the village has almost run dry. A wet rice crop under such conditions would not be a pretty sight!

Well, contrary to my forecasts last year, rice certainly has caught on as a dry-season crop. 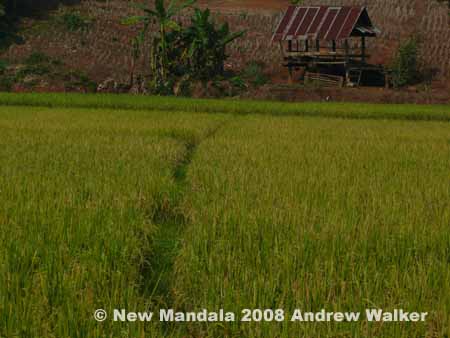 The main reason now is, of course, the high price of rice – a phenomenon that has been attracting headlines around the world. I did not have the time (or energy!) for a detailed survey but my rough estimate from walking through the paddy fields and talking to a number of farmers was that during the current dry season rice makes up about 30 percent of the cultivated area. Other popular crops include garlic, tobacco, maize and beans. Fortunately, water supply this year has been good.

Cultivation of rice has been encouraged by a government rice research station located about 10 kilometres from the village. The station distributed seed to the farmers and promised to buy the paddy for between 9 and 12 baht per kilogram (depending on the market price at the time of sale). Those who sell their rice to the research station will not be required to pay for the cost of the rice seed. Most farmers indicated that they would sell to the research station, though some will keep a portion of the rice for home consumption. They will also be watching the market price carefully to see if they can get an even better price somewhere else.

There is ongoing debate in Thailand about the extent to which farmers will benefit from high rice prices. This is one small piece of evidence that there will be benefits for at least some of them. At the very least it has added another option to the suite of dry-season crops being explored by Baan Tiam’s farmers.