When you’re accused of blasphemy, displays of humility and oligarchic pedigree may be the best defence.

Those complaints came from the likes of Amron Asyhari, chairman of the Hanura party, lawyer Denny Andrian Kusdayat, the East Java branch of Nahdlatul Ulama, the Anti-Defamation of Religion Forum (FAPA), and the 212 Alumni Brotherhood. Both FAPA and the 212 Alumni Brotherhood were instrumental in the trial and conviction of the former Jakarta governor Basuki Tjahaja Purnama (Ahok) for blasphemy.

Speculation has mounted as to whether or not Sukmawati will suffer the same fate as the former Jakarta governor, Ahok, who has served almost half of a two year prison sentence.

While Ahok’s conviction was the first blasphemy conviction of a public official, it was by no means an anomaly. Since the demise of President Soeharto in 1998, Indonesian courts have handed down 89 blasphemy convictions, prioritising the protection of religious sensibilities over freedom of speech and religion, notwithstanding that the latter is ostensibly guaranteed by Indonesia’s 1945 Constitution.

The fact that Sukmawati’s case already appears to be bucking the trend, which Ahok’s case, conversely, reinforced, makes it a significant point of inquiry.

Sukmawati is also the sister of Megawati Soekarnoputri, chair of the Indonesian Democratic Party of Struggle (PDI-P), the party aligned with the current Indonesian president, Jokowi. Targeting Sukmawati therefore provides an entry point for Islamists intent on undermining the pluralist and secular-oriented Jokowi. Indeed, as Tim Lindsey recently noted, with the 2019 presidential election tipped to be fuelled by nationalism and the role of Islam and race, attempts to have Sukmawati charged with either blasphemy and/or hate speech are “implicitly a move aginst Megawati, [her party] the PDI-P and Jokowi.”

Lindsey’s point recalls similar tactics employed by those Islamists who sought Ahok’s demise a little over a year ago. Throughout the Ahok controversy, both Lindsey and Azyumardi Azra recognised the national political dimension of Ahok’s case, noting that Ahok, as an ally of Jokowi, provided conservative and radical Islamists with a similar entry-point to undermine the president.

Contrasting Sukmawati’s case with that of Ahok, however, reveals that Soekarno’s daughter may not face trial, as the former Jakarta governor did. Moreover, such a comparison reveals further insight into the tension between race, religion, and politics in contemporary Indonesia.

On 4 April, five days after reciting her poem, Sukmawati called a press conference. There she stated that she had no intention of offending the Muslim population with her poem. She expressed her pride and gratitude both as a Muslim and as the daughter of Soekarno, who, she reminded the media, was himself a respected figure of Muhammadiyah, and the recipient of an honorary degree from Nahdlatul Ulama.

Sukmawati also explained that her poem was published in 2006 as part of a compilation of poems, also entitled Ibu Indonesia. Sukmawati clarified that the poem reflected “[her] view as an artist and culturalist and purely constituted a work of Indonesian literature.” Sukmawati stressed that she had not intended to insult Indonesia’s Muslim population. While fighting back tears, she apologised to all Indonesian Muslims, “from the bottom of [her] heart”, for any offence she may have caused.

Courts have not, however, deemed either the fact that the blasphemous remarks in question have been previously published or that they constitute a literary work as sufficient legal defences.

In Ahok’s case, the fact that his remarks had merely paraphrased a section from his 2008 autobiography, which had never caused any apparent offence at the time or subsequent to its publication, was deemed immaterial by the court.

Similarly, in 1968, a court was unmoved by the fact that an apparently blasphemous short story was a piece of literature. Entitled Langit Makin Mendung (Thunder Clouds Darken the Sky) and published in the literary magazine Sastra, the story depicted God as wearing glasses, the Prophet Muhammad bored with life in heaven, and the Archangel Gabriel aging with grey hair, all the while amidst the moral corruption of the Muslim population under Soekarno’s presidential rule.

In that case, H.B. Jassin, editor of Sastra, was sentenced to a year’s jail after refusing to disclose the name of the author, who went by the nom de plume Ki Panjikusmin.

While previous courts have been unmoved by these defences, it may be that Sukmawati’s unreserved apology was one of several reasons her case will not be escalated to the trial stage.

Ahok, conversely to Sukmawati, defended his own remarks vehemently. Rather than articulating a sentiment similar to Soekarno’s daughter, Ahok insisted that his remarks were not blasphemous, but had rather been made in opposition to “cowardly racists” he had encountered throughout his political career who had misappropriated the Qur’anic verse Surah Al-Ma’ida 51 to encourage Muslims not to vote for him because of his Christian faith. It was these “cowardly racists”, Ahok maintained, who were the true blasphemers.

The fact that in Sukmawati’s case MUI has not issued a fatwa is, I believe, telling of how this case will be resolved.

A day after Sukmawati’s press conference, MUI held a press conference of its own. There, MUI chairman Ma’ruf Amin stated that to perpetuate the controversy surrounding Sukmawati’s comments would only give rise to societal unrest. As Sukmawati had already apologised and seemingly realised the error of her ways, Amin both implored the police to cease their investigation and for those planning to protest Sukmawati’s remarks to refrain from doing so.

While seemingly sound in logic, Ma’ruf offered a rather different logic at Ahok’s trial. There, Ma’ruf told the court that MUI had issued a fatwa in response to Ahok’s remarks because society had demanded it. He also told the court that MUI fatwas are generally directed at law enforcers in order to prevent societal discord and vigilantism. 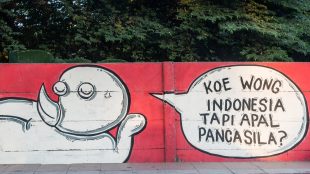 MUI knows full well, however, that its edicts have the opposite effect. Indeed, if an MUI fatwa were intended to instill calm among Indonesia’s Muslim population, why in 2016 did the issuance of its religious opinion and stance precede mass demonstrations the likes of which Indonesia had never seen? Similarly, if its edicts are designed to maintain public order, why were Ma’ruf and MUI content to address the controversy surrounding Sukmawati with a simple press conference rather than with a fatwa?

The lesson from Ahok’s case—and countless other blasphemy cases before it—is that without an MUI fatwa supporting their cause, efforts by Islamists to undermine PDI-P and Jokowi’s re-election campaign will lack the necessary religious authority and legitimacy, and will therefore most likely fall short. Indeed, such is the persuasive and legitimising nature of an MUI edict in contemporary Indonesia that both Ahok’s indictment and convicting judgment cited that religious opinion and stance issued by MUI Central as a supporting authority—notwithstanding the fact that an MUI edict is not a source of positive law in Indonesia.

It is feasible to argue, therefore, that its decision not to issue a fatwa condemning Sukmawati’s remarks, literary or otherwise, reflects how this case will conclude. But why does MUI not want Sukmawati to share the same fate as Ahok?

The apparent magnanimity shown by MUI towards Sukmawati compared to its treatment of Ahok has moved some of her accusers to question MUI’s motives, with FPI Jakarta’s Bamukmin suggesting that MUI is collaborating with the government and protecting Sukmawati from scrutiny because of who her father was. But while a presidential regulation issued by President Yudhoyono in 2014 declared MUI the government’s partner in all matters pertaining to Islamic life, this obviously did not preclude it from playing an instrumental role in Ahok’s demise.

A key analytical question that the protests of 2016–17 gave rise to was whether the Ahok case was a one-off: did it owe more to the unique combination of political circumstances surrounding his persecution, or did the mobilisations portend a more profound and lasting growth in the political power of Islamic populism? Writing at New Mandala in October 2017, Vedi Hadiz has speculated that:

What we may be witnessing in Indonesia is a newer phase within which political conflict increasingly relies on the employment of different variations (and combinations) of religious and nationalist forms of populism, and where political liberalism and Leftist critiques are effectively as side-lined as they had been in the authoritarian New Order.

While Hadiz might be correct—and I suspect he is—Sukmawati’s case may be evidence for the thesis that the persecution of Ahok was sui generis, at least insofar as the scale of that persecution was unprecedented. In this case, displays of humility, coupled with nationalist pedigree and a traceable lineage to Indonesia’s establishment, appear to have provided Sukmawati sufficient protection from the demands of religious populism. Ahok may have remained similary and outspokenly faithful to pluralist nationalism, but his lack of familial connection to Indonesia’s oligarchs arguably meant his double minority status—ethnic Chinese and Christian—made his situation insurmountable. 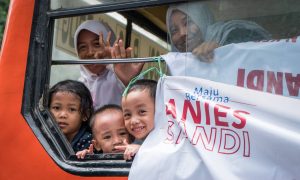 Warning signs for Jokowi in the importance of voters who were happy with Ahok's performance but voted against him on religious grounds.