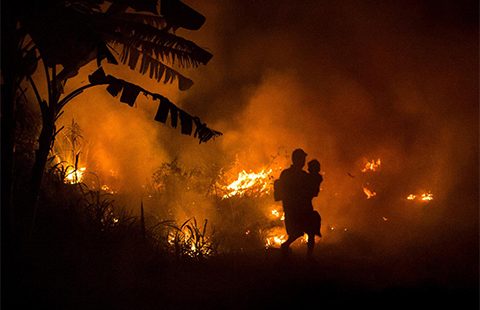 Forest fires in Indonesia: looking for reform amid the haze.

In late October, thousands of activists, students and lecturers in Sumatra staged rallies, urging the government to resolve the country’s haze problem.

A month earlier many called for the proclamation of a state of emergency. Over two months the pollution level had in some places inched up to seven times above the most hazardous level on the pollution scale. With thousands of sites on fire, the smoke afflicted at least forty three million people within Indonesia.

People waited indoors and children stayed home from school. Many have migrated to safe houses or fled to neighbouring provinces, trying to avoid the extreme pollution. Hospitals have admitted thousands of people suffering respiratory infections. Airports across the region closed for much of the period. Industry losses run into the billions of dollars.

The smoke wafting over Southeast Asia comes from logged over forest areas and drained peat lands across the islands of Sumatra and Kalimantan. Here timber and oil palm plantations are expanding rapidly.

According to the national weekly, Tempo, planting oil palm on peat land is difficult. But there is an easy and inexpensive method: torching the land. Pests and disease perish in the flames, while the ashes are rich in magnesium, calcium and potassium, which means there is no need to add chemical inputs. Rather than spending between Rp30-40 million per hectare, this method costs only Rp2 million per hectare

The major plantation companies often pay people to clear the land. The plantation production targets are huge, the deadlines are tight, and the contracts are cheap.

Local farmers also use fire to open areas, sometimes without taking precautions. Property disputes are also associated with arson, with some disgruntled people using fire as a weapon in tenure conflicts with companies.

Before setting forest on fire, the land must be dry. Tropical forest in its natural state does not burn. Because peat soil contains much water, canals are dug in the land to be torched. The problem is, until it rains, the peat will continue to burn.

Laws forbid the use of fire to open the land and there is a moratorium on peat. Nonetheless, corporations continue to use fire. To avoid law enforcement, they work quietly at night. The result is uncontrolled fires. While thousands of hotspots proliferate in concession areas, almost all large oil palm and timber companies deny that they burn the land, blaming local farmers instead. Even before the disaster passes, companies begin to plant oil palm.

A high official in the oil palm producers association (GAPKI) has said that oil palm faces a black campaign: all fault for the fire disaster is slated onto the oil palm companies. Oil palm is a source of biodiesel and a cheap replacement for fossil fuels. However critics suggests that this view neglects the high social and environmental price extracted by the industry.

The worst of these annual fire seasons fall in the El Niño years when the rains come late. In 1997/8 estimates suggested that 8 million hectares burned. This year’s severe El Niño event may be even more acute, already having higher carbon in a few months from these fires than the annual emissions from the whole US economy — unless the rains come soon.

A few months prior to the haze disaster, Indonesia’s bureau of meteorology warned of the extreme El Niño of 2015. However, preparations to anticipate and mitigate the possibility of fires remained inadequate.

These disastrous fires continue to occur for two reasons.

The first is the political economy of the plantation sector. The sector is booming. In Sumatera and Kalimantan the revenues and opportunities are immense. Developers and planners see economic growth as much more important than the environment.

Second, despite recent reforms, too often state institutions remain in thrall to these industries. Decision-makers receive benefits from facilitating access to land. Many large companies employ officials with influence in government as commissaries. For example, the major company Wilmar includes no less than four generals on its Indonesian commissary board.

An environmental activist has alleged that the former minister of forestry granted permission to corporations to burn 1.3 million hectares of forest areas for plantations. Whether this is true or not, the influence of corporate interests wishing to retain their control of land and forests has stifled reform. Resistance to change among the state forest bureaucracy slackens law enforcement.

The scale and severity of the fires this year could represent a watershed. The country is edging towards change.

President Jokowi, the reformist president, could use the fires as a reason to move towards a wholesale transformation of environmental governance. Jokowi has already outlawed new concession licences in peat lands, reviewing existing permits in peat lands that use fire and developing plans to rehabilitate degraded areas.

The government will amend key environmental and forestry regulations. We need to wait to see how the laws will be implemented and enforced.

Indonesia’s parliament has also agreed to the one map initiative, a step towards resolving the complex overlapping permits and local land tenure arrangements that plague resource management and drive conflict. Now local government and developers need to be brought into an integrated development system with clear property rights.

The government could move ahead with a system to prevent, monitor and control fire, with the ability to enforce bans and rapidly respond to fires at the local level. The president might consider giving teeth to initiatives to use the anti-graft agency to sever the collusive relations between some agencies and powerful private investors.

The state law might also systematically set about implementing the rules set out in certification systems such as the Roundtable on Sustainable Palm Oil.

Change will require sweeping reforms to ensure that the plantation sector truly serves the people of Indonesia and the environment.

Dr John McCarthy is an associate professor in the Australian National University’s Crawford School of Public Policy. Dr Zahari Zen is a professor at the University of North Sumatra.

The authors recently wrote a report entitled ‘Socio-economic aspects of high carbon stocks to improve the sustainability of sector in Indonesia’ under the High Carbon Stock Study (HCS project).