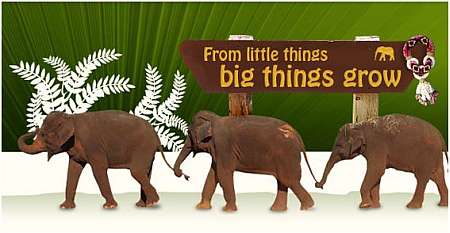 Sydney’s Taronga Park Zoo is celebrating the birth on 3 July 2009 of a male calf to Thai elephant Thong Dee:

Australia has welcomed the first elephant ever born in the country with the arrival of a 100-kilogram (220.4-pound) male calf at a Sydney zoo, according to keepers. The calf, yet to be named, was born at the harbourside Taronga Zoo just after 3am (1700 GMT) to a 12-year-old Asian elephant named Thong Dee, the zoo’s director Guy Cooper said. “(Staff) were with her throughout the night and have been sleeping at the barn to support Thong Dee the instant she went into labour,” Cooper said. “She was quite magnificent and her success is a tribute to the incredibly hard work our elephant keepers have done to support our elephants as a true family unit,” he added. Thong Dee, formerly a Bangkok street elephant, was surprised by the birth, and needed to be calmed before she could be introduced to her son, said Cooper, adding that the calf was conceived naturally with the bull Gung under the zoo’s breeding programme. She greeted her baby by touching his trunk and he soon tried to suckle, which Cooper said was a good sign. “The early signs are good and we will monitor mother and calf very closely, providing every possible support,” he said.

The zoo has launched a competition to name the baby elephant.

Which got us thinking…

How about we have a campaign to name the young boy Suwicha (р╕кр╕╕р╕зр╕┤р╕Кр╕▓), after Thai political prisoner Suwicha Thakor? Most of you will remember that Suwicha Thakor was sentenced to 10 years in prison for posting digitally altered images of the king on the internet. It is an outrageous sentence, and would have been even longer if Suwicha had not pleaded guilty.

Both Suwicha Thakor and the baby elephant are going to spend a long time behind bars. But we have no doubt that the elephant will have a much more pleasant time of it than Suwicha.

You can go on-line to make your naming suggestion here. You are asked to provide a reason for the name — perhaps just a simple “Free Suwicha Thakor” would be appropriate. It may also be relevant that Suwicha means “one who possesses good knowledge”. On the zoo’s naming criteria — authentically Thai, suggesting happiness (what we might call hope and endurance), reflecting a family connection, distinctive sounding, and different to the other elephant names — it looks like a possibility.

If a large number of New Mandala readers take a minute or so to vote, we may be able to get a bit of publicity in Australia, and elsewhere. The naming competition closes on 25 July, so we need to be quick.

It may be a small contribution towards keeping Suwicha Thakor, and others suffering similar fates, in the international public eye. As the zoo’s website says, “from little things big things grow”.