New Mandala is very pleased to introduce a new series of original contributions on post-GE14 Malaysia, edited by our new Guest Editor for Malaysia, Meredith Weiss.

Under the banner of “Changing Malaysia”, this series of essays seeks to probe what is possible, what is probable, what is aspirational but unlikely, and what has already been achieved as Malaysia pursues socioeconomic progress and reform—including beyond the highest-profile, most hotly debated dimensions.

Contributors will include Malaysian expert observers, participants in policy processes, activists, and those wearing multiple hats, from across vantage points and political perspectives. Over the months to come, they will share their expertise and insights into what in or about Malaysia is changing or has changed, what should or will remain constant, and how Malaysia might best advance in new directions or recalibrate key goals. At stake are difficult decisions and tough compromises, but also real opportunities as Malaysia charts its path through a new, post-Barisan Nasional era.

The “Changing Malaysia” series begins, though, with an analysis of Malaysia’s post-GE14 political economy that emphasises the continuities between Barisan Nasional and Pakatan Harapan rule. Professor Edmund Terence Gomez writes today at New Mandala that “barely nine months after taking control of government, Pakatan appears to be re-instituting the practice of selective patronage in the conduct of politics and through the implementation of public policies.”

New Mandala is proud to continue its conversation-leading coverage of Malaysian affairs through this series, and to be able to host as respected a scholar as Meredith as a guest editor. As Professor and Chair of Political Science in the Rockefeller College of Public Affairs & Policy at the University at Albany, State University of New York, Meredith explores political mobilisation and contention, the politics of identity and development, and electoral politics in Southeast Asia, with a particular focus on Malaysia and Singapore. Readers will be familiar with her public commentary on political trends in Malaysia and elsewhere through her contributions to New Mandala.

The “Changing Malaysia” series has been made possible with the ANU Malaysia Institute’s continuing support of New Mandala’s coverage of GE14 and its aftermath. 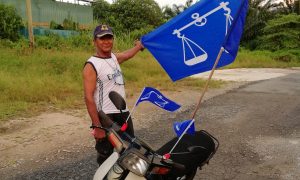 Rebellion and regret: talking to rural voters after GE14

The ‘new Malaysia’ is viewed with sceptical eyes in poor rural communities in Johor.