A flood of Chinese garlic?

The bilateral trade agreement between Thailand and China came into force on 1 October 2003. As has been pointed out, ((Bangkok Pundit provides an informative discussion of Thailand’s trade agreements. Pundit’s research provided me with a lot of pointers for this post!)) calling it a “free trade” agreement is something of a misnomer as it only applied to agricultural commodities. But the impact in this sector was potentially significant with the abolition of tariffs on almost 200 varieties of fruits and vegetables.

Critics of this trade agreement have argued that it has had a substantial impact on the livelihood of Thailand’s farmers. A number of sectors have been identified as being particularly affected: some fruit producers as well as growers of garlic, onions, carrots, cut flowers and potatoes. The inclusion of garlic in this list is not surprising given that, according to FAO, China is by far the world’s largest garlic exporter. Claims about the economic impacts of low cost Chinese garlic have been made in other countries as well. Here are some examples of the statements of impact in Thailand:

A free-trade agreement (FTA) that Thailand signed with China a little over two years ago has begun to worry politicians and academics, who say it has proved disastrous for the Southeast Asian country’s farmers. The China-Thailand FTA, which took effect in October 2003, was limited to agricultural produce, deferring a more comprehensive deal until 2010. But there are second thoughts now after a deluge of Chinese fruits and vegetables ruined farmers in the country’s northeast. “The arrangement has been a huge mistake,” Thai Senator Kraisak Choonhaven said. “Thai farmers cannot compete with Chinese imports like apples, garlic and onions. They are two to three times cheaper; many farmers have been left destitute.”

The cheaper imports of garlic and onions from China in the wake of the agreement have put nearly 40 percent of Thai farmers out of business, says FTA Watch, a group made up of Thai activists opposed to such free trade deals. “About 50,000 farming household have been affected.’’

[The Thailand-China agreement] has had an appreciable impact in the sectors covered. The “appreciable impact” has been to wipe out northern Thai producers of garlic and red onions and to cripple the sale of temperate fruit and vegetables from the Royal projects.

A case in point is the agreement with China to eliminate completely tariffs on 116 types of fruit and vegetables. This came into effect on October 1, 2003. Within a year, imports from China surged by 180% resulting in a plunge in prices of most temperate fruits and vegetables in the domestic market by 30-50%. It is estimated that 100,000 farming families or 500,000 people have been negatively impacted by this surge in cheap imports, thereby affecting their access to food and nutritional input. Some, like garlic and onion growers, have suffered especially severe effects with their livelihoods threatened. Despite warnings by academics, the government had chosen not to take any safeguard measures.

But market and trade data compiled by Thai government agencies don’t necessarily support these arguments. Certainly there does appear to have been a short term impact in 2004, but the picture since then is rather more complex. First, let’s examine the import statistics themselves (available from the Thai Customs Department – the “HS code” for garlic is 0703.200.007). 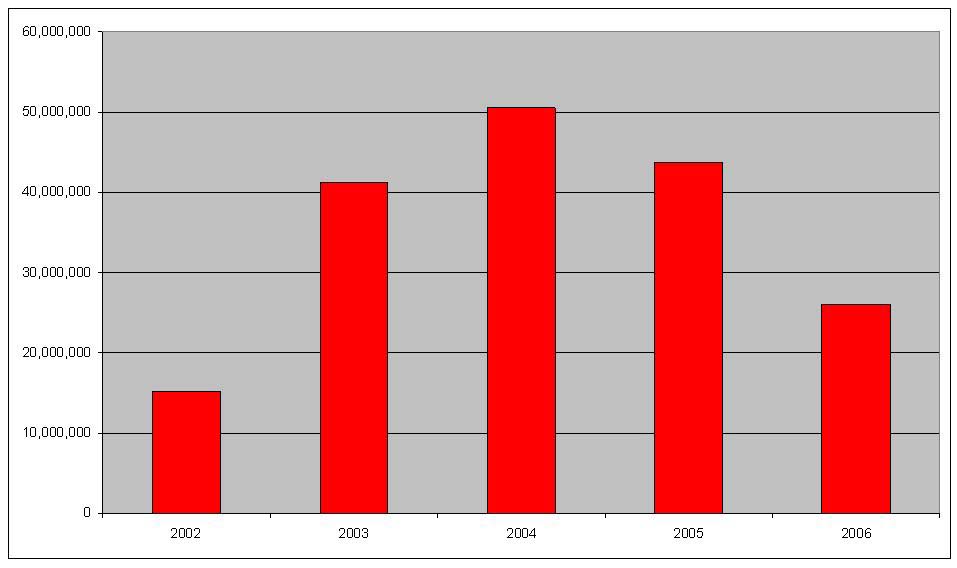 This shows that 2004, immediately after the free trade agreement, represented a highpoint for garlic imports from China with slightly over 50,000 tonnes flowing into Thailand’s markets. (I have seen some references to Thailand having a quota on garlic imports but cannot confirm this.) But there are two important points to note. First, it is clear that imports were growing rapidly before the trade agreement came into place (October 2003). Average monthly imports between January and September 2003 were 3,094 tonnes, much higher than the 2002 monthly average of 1,256 tonnes. And the second key point is that imports declined considerably during 2005 and 2006. (It is also possible that pre-agreement trade figures are understated given the non-reporting of garlic smuggling.)

Price data is also interesting. Here, thanks to the Thai Office of Agricultural Economics (OAE), some longer term data are available. There is, as would be expected, a significant price dip in 2004 following the trade agreement with China. But this low price is certainly not unprecedented (1998 was lower and 2001 only slightly higher) and the price has recovered since to reach an eleven-year high in 2007.

OAE also has other interesting data that provides some better insights into farmer decision making and livelihood impacts. The following graph shows the total production from 1998 to 2007. On the face of it this does suggest that the trade agreement may have had some impact, though the decline in production in 2003 was in advance of (but perhaps anticipating) the agreement. But the variation between 2003 and 2007 suggests that there may be a range of factors at play. And remember that Graph 3 refers to production, not to revenue. Here the picture is somewhat different given the price increases that have occurred in recent years. Clearly 2004 was a bad year, given the low price and the relatively low production. But since then there has been some recovery as prices have steadily improved. Based on my local research I speculate that the overall picture for garlic production may be something like this:

The significant increase in Chinese imports in 2004 had a substantial effect on price. Many farmers anticipated this impact and switched to alternative crops. This switch may have been encouraged by relatively poor yields in 2003 (a national average of 806 kilograms per rai whereas most years the figure is well above 900 kilograms). It was also undoubtedly encouraged by a government adjustment scheme that paid farmers to plant crops other than garlic. As garlic farmers adopted alternative crops many of them found that these crops could also provide relatively good returns. Some of these crops even required less labour input than garlic. Many farmers preferred growing crops under contract (rather than the independent production of garlic) because agricultural inputs were provided by the company, largely removing the threat of increased indebtedness. As garlic prices have recovered in recent years returns have improved but there has been a steady decline in its overall cultivation as farmers who formerly concentrated on garlic now chose from a more diverse range of cropping options.

The picture of a free-trade induced crisis in the garlic sector is highly simplified and rather misleading. If any New Mandala readers can provide further insights into the Thai garlic market I would greatly appreciate their comments.