Although there is a slowly growing number of Indonesian artists represented in the collections of Australia’s public art galleries, it is probably fair to say that Indonesia does not yet loom large in the minds of our art going public. In some ways this reflects the always-surprising lack of general engagement in the affairs of our largest neighbour. However, the Indonesian contemporary art world is an increasingly dynamic part of the global artworld, as the recent appointment of Indonesian art collective Ruang Rupa as the curator of Documenta 15 indicates. While the Queensland Art Gallery | Gallery of Modern Art (QAGOMA) has been advancing Indonesian art through the Asia Pacific Triennial exhibitions since 1993, and has now built up a sizeable collection, other galleries have been far more modest in their acquisitions and interest. This is surprising given that so many important Australian artists have engaged with their counterparts in Indonesia through programs like the Artists Regional Exchange and AsiaLink. Curiously, Indonesia has also failed to catch the attention of the commercial art market in Australia, where there are few serious collectors of Indonesian contemporary art and few Indonesian artists with Australian gallery representation. Those several Australian collectors who are interested in Indonesian art tend to make their purchases on visits to events like ArtJog and the Yogya Biennale during which time they also make the rounds of artists’ studios in order to bypass the sometimes overly ambitious pricing of the small number of Asian commercial galleries and European art agents speculating in Indonesian art. As a consequence, contemporary Indonesian work has tended to be of peripheral interest at the Board level of most of our major institutions. Even when a more adventurous state gallery such as the Art Gallery of South Australia gave one of Indonesia’s most high-profile artists, Eko Nugroho, a solo show in 2011 the Australian artworld reaction was muted. However, by all accounts the actual exhibition was a crowd pleaser with local audiences. Given that Nugroho’s limited edition screen printed works now have an asking price of around $10,000 in Singapore galleries, Australian collectors late to consider Indonesia now feel themselves priced out of the most visible part of the Indonesian contemporary art market. On the other hand, those who were astute enough to pick up his prints for a few hundred dollars when he was in Australia in 2006 to participate in Sydney’s artist-led Gang Fest, at Closing the Gap at Melbourne’s MiFA gallery in 2010, or subsequently exhibiting at the National Gallery of Victoria (NGV) with fellow artist Jompet Kuswidananto in 2012 now feel fortunate indeed.

Fortunately, the prospects for Indonesian contemporary art in Australia are looking up for both collectors and artists. In the lead up to the National Gallery of Australia (NGA)’s Contemporary Worlds: Indonesia exhibition from 21 June–27 October this year, the Darren Knight Gallery in Sydney has brought works from 12 early and mid-career Indonesian artists to the attention of the Australian artworld in its recent Termasuk: contemporary art from Indonesia exhibition. This exhibition was produced in partnership with curators Lauren Parker and Melissa Burnet Rice from Indo Art Link and influential art advisor and collector John Cruthers. Supporting both the NGA and Darren Knight exhibitions as well as other notable Indonesian art events in Australia like last year’s #perempuan exhibition in Melbourne, which was curated by Santy Saptari, was the Project Eleven Foundation established by Melbourne lawyer Konfir Kabo and businessperson Monica Lim. Kabo and Lim are without doubt the biggest collectors of Indonesian contemporary art in Australia.

Project Eleven is also notable for commissioning important research into current Bandung artists (published in the book LipLap: 35 Bandung artists under 35) and supporting Carla Bianpoen’s forthcoming book Indonesian Women: Into the future, which will have an accompanying exhibition at the National Gallery of Indonesia (Feb 26–Mar 16, 2019). Project Eleven has also sponsored Australian residencies and exhibitions by significant Indonesian artists including Jumaldi Alfi, Ugo Untoro and Tisna Sanjaya, whose Art is a Prayer performance work at the State Library of Victoria in 2017 was perhaps as memorable as Dadang Christanto’s famous work, For Those Who Have Been Killed, a generation earlier at the first Asia Pacific Triennial at Queensland Art Gallery & Gallery of Modern Art (QAGOMA) in 1993. RESTU RATNANINGTYAS,
“There’s a crack, so the roots can get in” (2018).
Watercolour on paper 75 x 65 cm | Image courtesy of Darren Knight Gallery

The Termasuk exhibition was the result of extensive in-country curatorial research across Indonesia’s main art centres. It was also accompanied by a comprehensive public education program, involving Dr Yvonne Low from Sydney University and Dr Matt Cox from the Art Gallery of New South Wales (AGNSW), as well as the three curators and Konfir Kabo, who gave illuminating insights into his collecting process.

Three of the participating artists and an Indonesian curator also visited the exhibition and participated in the public program. Gallery visitors interested in acquiring works were given extensive background briefings on each artist by the curators who between them knew all of the artists personally. Despite it being a commercial show, it often had the feel of a salon dedicated primarily to advancing understanding of the Indonesian art world.

Perhaps most importantly for neophyte Australian collectors, all the works were attractively priced at close to local Indonesian levels with a modest mark-up to cover GST and framing costs. The strength of the selected works was clearly evident in the high clearance rate and the unexpected interest in the exhibition from curators from at least two state galleries. One major public institution reserved works from several artists subject to obtaining Board approval for their purchase.

For Indonesian contemporary art to really take off in Australia two things are required. The first is that a greater number and more diverse range of accessibly priced Indonesian artists begin to enter our public collections and demonstrate to the market that they are of art historical importance. Fortunately, many notable Indonesian artists creating institutional installations costing tens of thousands of dollars also remain committed to producing more accessible works for less well-heeled or more cautious private collectors.

The second requirement is that a secondary market emerges to make Indonesian art a viable investment. Despite most serious collectors purchasing works with no intention of ever parting with them, liquidity and transparency in the art market give new collectors greater confidence that the prices they are paying are justifiable. However, getting Indonesian art into public institutions remains a substantial challenge. Getting it put on display is even harder.

Until this year the NGA had only ever purchased two works by Indonesian contemporary artists, although a complementary set of further works by Heri Dono was donated by patrons Brian and Gene Sherman, who have also exhibited Jompet Kuswidananto at their gallery in Sydney. Encouragingly, the NGV also seems increasingly intent on advancing Indonesian contemporary art with a burgeoning collection over recent years featuring six works by Eko Nugroho and others by Jompet Kuswidananto, Haris Purnomo, FX Harsono, Entang Wiharso, Hahan, Ichwan Noor and Tromarama. Although they are often reticent to discuss such arrangements publicly, a significant part of the art that is acquired and exhibited by our public galleries follows the interests of patrons, sponsors and donors. Major works are often obtained only with substantial donations by wealthy benefactors who frequently expect “their” works to be prominently displayed. For example, the AGNSW has quite a number of individual donors giving over $1 million and several well-known families giving in excess of $5 million. 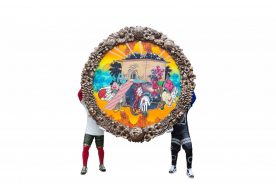 Although much of this private money has gone towards supporting the Sydney Modern project, some of it has been donated towards the purchase of specific works of interest to the donors, including the recent acquisition of Eko Nugroho’s Lot Lost (2013-15) at Art Basel in Hong Kong, which was funded by Judith Neilson and Dick Quan, two long-time gallery benefactors well known for their interest in contemporary Asian art. However, until more patrons develop a deeper interest in Indonesian art, institutional interest is likely to remain muted. It is perhaps for this reason that the AGNSW has organised a field trip for a number of its patrons to the Yogyakarta art fair, ArtJog, later this year. Hopefully this trip will translate to greater institutional support for Indonesian contemporary art and an expansion in the gallery’s current collection of four Indonesian contemporary artists. Although there is a lot of idealistic discussion in Indonesia about the importance of socially-inspired contemporary art remaining aloof from commercial considerations and the institutional judgements of a Western artworld, the reality is that many Indonesian artists desire an appreciative international audience as much as they need to make a sustainable living as art professionals concerned with social issues. Given the lamentable lack of Indonesian state funding for contemporary art, a tepid local market for more avant-garde or socially progressive art, and the ideological strings sometimes attached to funding from international NGOs, quality commercial exhibitions like Termusuk which foster considerable interest amongst Australian collectors and Australian public art institutions will only add to the economic freedom of Indonesian artists to independently develop and advance their various social and cultural concerns.

Editor’s note: this article has been updated from its original form to remove material which inaccurately described the number of Indonesian works in the collections of QAGOMA and other Australian galleries. We apologise for the error.

The arts at New Mandala 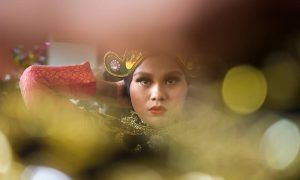 The allure of Joget Gamelan

Threatened by neglect and officialdom, can the great Malay tradition of Joget Gamelan make a comeback?