As previously reported by Nick Nostitz here on New Mandala, a phenomenon in Thai politics that has been drawing much attention during recent weeks has been the emergence of the “White Mask” group. In this piece, I discuss the prospects for this group’s movement against the current government, and also give a reflection on what it indicates about the present condition of the anti-Thaksin movement in Thailand. 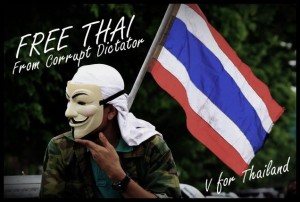 Declaring the goal of their group as “overthrowing the Thaksin system”, the White Mask group is hardly a new player. The group’s members, as Nick reported, are predominately drawn from among those have previously joined the Siam Samakhi and perhaps Pitak Siam rallies. The group’s own webpage can be found here. The group have been staging their “weekly meeting” in several locations, both within and outside Bangkok. Their main gathering point in Bangkok has been at the Rachaprasong Junction.

A report in Matichon suggested that the number of people who joined the group’s protest at Rachaprasong had multiplied very quickly during the past two weeks. From the small number of around 200-300 in their first few days of gathering, to the latest number of 2000-3000 on 16 June 2013. This rapid rise in the number seems astonishing. It was explained, however, that such a sudden rise came on 16 June because the White Mask group was joined by “the Thai People Network”, another anti-Thaksin group which has been staging their protests at Sanam Luang. A major component of the Thai People Network is the unique “Royalist Communist” group, who recently staged a march to the Royal Palace to ask for a Royally-appointed Prime Minister. The Thai People Network joined the White Mask on their latest staged protest at Rachaprasong as the group’s guards, and at the same time were seen wearing the mask themselves. For the Royalist Communists, this resulted in a peculiar combination of “Royalism-Communism and Guy Fawkes” as their symbols of identity.

The past and present leaders of anti-Thaksin factions seem to hold a positive outlook for the emergence of the White Mask group. As reported in Prachatai, Sangsit Piriyarangsan, the Dean of the College of Social Innovation, Rangsit University (nowadays a gathering point for anti-Thaksin academics), portrays the White Masks as an “independent movement” joined by “a new generation of educated people”. Suriyasai Katasila, a People’s Alliance for Democracy leader, argues that the White Mask represents an “intelligent” move to “internationalise” the meaning of the movement, allowing foreigners to easily understand the movement as a fight against authoritarianism. The main message that these anti-Thaksin leaders try to present is that the emergence of the White Mask group could be seen rather as a “sign of progress” of the movement against Thaksin and the present government. This is why they have tried to attribute to the group what they see as the “signs of quality” of social movements. These attributes include, for example, the quality of being autonomous, independent, and educated.

To me, however, the White Mask group does not seem to have better prospects than its predecessors, Siam Samakki and Pitak Siam, which faded after months of activities. There is an apparent confusions surrounding the goal of the movement and the use the White Mask, or the “Guy Fawkes” mask, as the anti-Thaksin symbol. The groups’ supporters claim that their uses of the Guy Fawkes mask is inspired more by the movie V for Vendetta, and similar uses of such a mask in the internationally recognised Occupy movement. Nonetheless, the Thai White Mask movement cannot easily follow in these footsteps. If adaptation of the mask is in order to be more “internationally aligned”, holding a banner supporting Thai Nationalism and the King at the same time introduces a sense of contradiction and irony.

An even more serious problem for the success of the White Mask group seems to rather lie in what the symbol “fails” to represent. The uses of the White Mask, more than anything, signifies the an effort to move away from set of the “old symbols” mobilised by the anti-Thaksin movement. It is worth remembering that the symbols previously used were all associated with Thai nationalism. Movements against Thaksin have long been relying on the “conservative” forces in Thailand, and aligning with such a force has been crucial to their past success. To depart from using this, as perhaps done by the White Mask group, is indeed a risky path to take. It allows the movement to portray itself as a fresh one, but at the same time also reduces the power of their most powerful weapon against Thaksin. A sign of the problem it can bring about for the anti-Thaksin movement is evident in the following comment by Thepmontri Limpayom, an academic who played a central role in the protests on the Preah Vihear temple issue.

I don’t care and disagree with the “Westerners’ Mask”…I never stop you from doing anything. But I disagree with this. Anything that contradicts the Thai culture, and is just a fashion, cannot be sustained.

In sum, what I see from the emergence of the White Mask group is not the sign of progress, but rather the sign of regression among the anti-Thaksin movement. Its emergence is a reflection of the movement’s current state of disarray, and the decay of the effectiveness in their old “nationalist” frame for mobilisation. In addition to being in a highly fragmented state, with the absence of a strong leadership, they are also clearly lacking a new unifying symbol. Yingluck’s premiership might currently be facing a difficult “mid-term” period. Yet, it seems that her opponents on the street may not be doing any better.

Thorn Pitidol is a Thai academic at Thammasat University