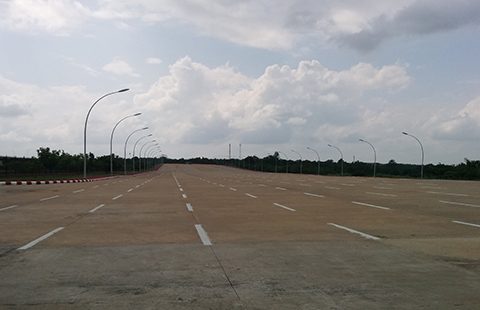 A tale of two cities in Myanmar The contrast between Yangon and Naypyitaw shows both the leaps and limits of Myanmar’s incredible transformation.

Imagine a country in which people still wear traditional dress but walk around glued to their smartphones, where the capital is a completely planned city in the middle of nowhere and ministry employees all live together according to their marital status.

The course, The Political Economy of Myanmar, gives participants first-hand experience of the country’s current political, economic and social transition.

The discoveries were almost instantaneous, came thick and fast, often caught you off guard, and are long-lasting. But, the most striking thing about the trip was when we packed up and travelled from Yangon to the new capital, Naypyitaw.

The difference between the old capital and the new demonstrates where the country is and what it hopes to become.

Yangon is the heart of Myanmar. The capital from independence in 1948 up until 2006, it is where most commercial entities set up shop, not to mention organisations like the UNDP, World Bank and international NGOs. The city has seen tremendous growth in recent times and for all intents and purposes functions as the nation’s metropolis.

The city has a vibrant atmosphere, excellent restaurants and bars, and fosters a great sense of communal living for its citizens. You can walk the downtown streets any time of day or night and see people sitting, talking, eating and having fun. Yangon is bustling with life.

Naypyitaw, in contrast, is empty and devoid of any character.

The Hluttaw (Parliament) compound will hopefully house a truly democratic government after historic elections set for November. And if size is any indication, this will be a parliament of the people. The country’s authorities have built it big enough to accommodate everyone in the nation. Its sheer scale is phenomenal.

Naypyitaw’s roads are also colossal. The city’s new roads, including, my favourite, a 20-lane highway (10 lanes in each direction), set a very ambitious goal. Every road in Naypyitaw looks like it was built to handle large volumes of traffic. But it is common to see these five- and six-lane roads with very few cars on them.

The hotels and dedicated ‘Hotel Zone’ is also a standout feature of the city. The zone is separate from the government zone and the locals’ living area. The plethora and size of the hotels shows the aspirations of the government. They are demonstrating they have the facilities and infrastructure to host major summits like ASEAN or even perhaps the Southeast Asian Games.

But for all its peculiarities Naypyitaw reveals the immaturity of the country’s transition.

The layout of the Hluttaw makes little sense. The buildings are separate, requiring MPs and parliamentary staff to be herded into minibuses or golf carts to move between them.

The structures themselves are huge, with endless corridors, stairs and security checkpoints. The grandeur and opulence of the Hluttaw sends the wrong message to outsiders. The jade pillars and abundance of marble is in stark contrast to the living conditions of most Myanmar citizens.

The Hotel Zone, with its resort-like set up for some and Las Vegas lights for others, has an aura of the fake. The facades and entrances are grand but you don’t have to look too close to see the cracks. The Hotel Zone seems to be all about image, not substance.

Maybe the thinking behind this planned city was if we build it they would come. After decades of isolationist military rule, the country’s leaders are inviting the world to their country.

Of course, the country is still going through a period of immense transition.

Myanmar is the first country I have been to where there is no McDonald’s or 7-11. You won’t find HSBC or Starbucks here either. The first KFC opened its doors only a few weeks ago. The lack of truly global brands reflects where the country has been. Economic sanctions were only lifted in 2012 and the upcoming election on 8 November may provide the catalyst for further foreign investment.

I look forward to returning to Myanmar after the election and after international investment starts pouring in. I want to see how the introduction of global brands influences the locals, their culture, living standards and society.

The two-week ANU study tour, ‘The Political Economy of Myanmar’, was organised and led by New Mandala co-founder Andrew Walker with support from an AsiaBound grant.