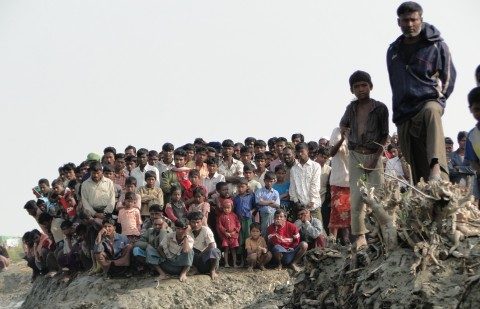 Action needed in the Buddhist-Muslim zone This column was published at The Myanmar Times on Monday, 25 May 2015

Myanmar’s troubled western borderlands are in the news again. This year the headlines are about the trade in desperation that sees thousands take to rickety boats each month, seeking sanctuary and better prospects across the Andaman Sea.

Gut-wrenching stories from southern Thailand and Malaysia, now backed up by the discovery of mass graves, have jolted regional players into action. For the distressed people on the boats – some who call themselves Rohingya, others of whom are Bangladeshis – an immediate solution is required.

Meetings are being convened, official briefings sought and millions of words welded together. The number of lives at stake means that action will need to follow.

We can’t forget that people in the borderlands where Myanmar rubs against Bangladesh – Buddhists and Muslims alike – have been in a desperate situation on both sides of the international frontier for as long as anyone cares to remember.

This Buddhist-Muslim hybrid zone sees old grievances compounded by recent strife, with nobody quite sure how the basic issues should be handled. The Bangladesh and Myanmar governments dwell on their own interpretations of the “push” and “pull” factors that encourage people to cross the border. Yet some hard facts often get lost in the duelling stories of what is going on.

The simple reality is that communal antagonism in both countries thrives alongside poverty and ignorance. The situation in northern Rakhine State is particularly egregious. It can’t be sustained, and the fear is that it could get much worse.

Informed commentators warn of the potential for more mass violence. Some are anxious that the Rohingya, deemed ineligible for the rights enjoyed by Myanmar citizens, face a slow-burning genocide.

Such strong statements draw fury from increasingly vocal Myanmar nationalists. They claim that without firm government and popular responses, the country faces an ongoing invasion of Bangladeshi migrants eager to steal their jobs and land. Prejudice against Muslims threatens to create a populist frenzy as political leaders seek the support of the nationalist core.

At the same time, thinkers in both countries are wary of the rising tide of exclusion that anti-Rohingya rhetoric implies. They have in mind that there must be a better solution – one that won’t involve killing and hatred at home, or displacement and starvation on the high seas.

Most proposals for action have modest and incremental ambitions. These fit the needs of budget-constrained governments and an international community with a limited attention span.

If the world wants to avoid the prospect of even greater disaster, bold action should be debated in a new spirit of goodwill.

As a start, Bangladesh and Myanmar, and everyone else, need to start treating the shared Buddhist-Muslim hybrid zone as a place of special opportunities and potential. Some major infrastructure is already planned, but it can’t happen soon enough. Leaving these borderlands to fester isn’t a solution.

The overall goal should be to eliminate the “push” and “pull” factors for migrants to the extent that this is possible. That means millions of better jobs on both sides of the border, an ideology of joint development and an appreciation that both Myanmar and Bangladesh, and their citizens, will enjoy the benefits that cascade from fairer treatment of the Rohingya.

For now, the Rohingya will continue to be pawns in the domestic politics of the two countries. Even the use of the “R” word draws a fierce response in Myanmar. That oversized reaction will need to stop. Creating awareness that people begin to call themselves by new names all the time could be one early activity.

Done in the right way, the allocation of secure citizenship for the Rohingya might follow in a novel form. One idea is dual citizenship for those millions of people, both Buddhist and Muslim, who have a long-term connection to both countries. That would take decisive and courageous leadership, and an acknowledgement that the rolling crisis of migration is a symptom of the underlying citizenship stalemate.

If they were prepared to embrace a portfolio of such suggestions, Bangladesh and Myanmar could rightly call on the full backing and resources of regional and global partners. They would be well-placed to make major demands on international donors: Perhaps instead of building fences, plans for a bridge across the hybrid zone could bustle ahead.

We should also re-confirm our appreciation that Buddhists and Muslims have lived side-by-side for generations on both sides of the border. Making sure that they can live together peacefully will require creative input, big money and mutual compromise, but the avoidance of further disaster will be worth it.

Nicholas Farrelly is a fellow in the Australian National University’s Coral Bell School of Asia Pacific Affairs and the co-convenor of the 2015 Myanmar/Burma Update conference, which will be held in Canberra 5-6 June.