All Quiet on the Eastern Front

Much of New Mandala’s coverage of the campaign has detailed the rumble and tumble of Jokowi and his entourage, or Prabowo’s grandiose rallies in the capital cities of Java and Sumatra. But the vast majority of Indonesians haven’t had close encounters with either Prabowo or Jokowi’s campaign. Outside the urban centres of Java, where 3G connections are dodgy and nightly blackouts interrupt the TV news, the noisy buzz of The Campaign is but a distant hum.

This post looks at the ground-war in two of Indonesia’s more isolated Eastern cities: Dominic Berger (@oomberg) reports from Ambon in Maluku province, and Eve Warburton (@EveWarburton) from Kendari in Southeast Sulawesi (Sultra). Here the streets are quiet and political rallies attract small crowds. Instead, local elite networks, party machines and identity politics are shifting votes–in what appears to be in Prabowo’s favour. A quiet day at the PDI-Ps Ambon city office, in the final days of the campaign. Credit: Berger

Like elsewhere across the country, the two candidates have attracted a loyal band of followers. Prabowo fans in Ambon and Kendari espouse the importance of having a ‘tegas’ leader, a man who is brave and decisive, and is committed to pursuing Indonesia’s national interest on the world stage. Jokowi’s dedicated supporters in the East show immense affection for an honest, humble man-of-the-people, mirroring the sentiment of his fans nationwide. 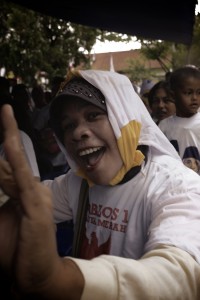 But it’s Kalla’s appeal that led the Jokowi camp to assume that they’re headed for victory in many of Eastern Indonesia’s provinces. Born in South Sulawesi and an ethnic Bugis, Jusuf Kalla is a popular man in these parts. He’s one of the most successful businessmen and politicians to have emerged from Eastern Indonesia. People in Sulawesi are proud of Kalla’s success.. The Bugis people and South Sulawesi more generally are still considered to be ‘fanatic’ in their affection for Kalla.

On the other hand, Prabowo’s coalition partners have been working hard to cultivate local elites in Sulawesi, many of whom feel conflicted. For example, Sultra’s Governor, Nur Alam, is head of PAN and close to Hatta Rajasa, and South Sulawesi’s Governor, Syahrul Yasin Limpo, is head of Golkar’s provincial branch; but like many prominent politicians and businessmen in Sulawesi, they have long lasting relationship with Kalla. In Ambon, Kalla holds a favourable reputation as peacemaker. For his direct role in negotiating an end to the sectarian conflict that engulfed the province in the early 2000s, he was made an ‘honourary citizen’ of the city of Ambon. His reputation and personal networks in both these provinces are still expected to bring in the votes despite conflicting party alliances – but Jokowi’s limp campaign is putting this asset at risk.

In Eastern Indonesia there is a sense of being “forgotten” by Jakarta, of being poorer and more vulnerable to conflict than other parts of the country. Playing on Malukan regionalist sentiments, on several occasions, local elites for the Prabowo campaign had crowds in uproar at the suggestion that under a Prabowo presidency a Malukan would be appointed to head a ministry.

Many here embrace Prabowo’s cultivated image of a strongman, and feel a military figure will offer security – not necessarily from the outside, but from within. Many in Ambon note that the sectarian conflict occurred during the “civilian” administrations of Habibie, Gus Dur and Megawati. An authoritative figure is needed as the head of state, many feel, in order to control unruly social elements ‘with a firm hand’, if needed, as one female protestant priest put it. In Kendari, Prabowo supporters contrast his firm style with what they believe is Jokowi’s na├пve approach to the campaign: “He hasn’t done his blusukan out here! Who needs a simple, humble man, whose only skill is visiting markets and cleaning sewers? This is not a presidential figure”, said one Golkar elite. Even Jokowi supporters argue that PDI-P and its coalition partners have relied too heavily on Jokowi’s personality and reputation for blusukan, which they fear won’t be enough to penetrate these outer regions. Strong men on show at a Prabowo-Hatta campaign event in Kendari. Credit: Warburton.

The candidates’ ethnic and religious credentials matter here, too. While presidential races don’t usually involve the mobilization of ethnic identities in the way that local elections might, in places like Ambon, the work of religious groups in cultivating votes remains key. Here Prabowo’s coalition is doing its best to cultivate support from both sides of a divided community. Within the Muslim population, PPP,PKS and PAN , and the web of Muslim groups and associations linked to them, are doing the groundwork. But even Gerindra has influential reaches into the Mosque networks. For example, one senior Gerindra member acting as the provincial head of a Muslim Woman’s group used this position to hold sermons in Mosques throughout the province, urging the woman attending – and their families–to vote for Prabowo.

A Gerindra member, who also happens to be the head of an influencial Woman’s Muslim organization, urging woman gathered at a Mosque outside Ambon to vote for Prabowo. Credit: Berger.

But the identification of the Prabowo-Hatta side as the ‘Islamic” ticket, and its close relationship with the hardline of Indonesian Islam has put the campaign on the backfoot in the Christian community in Maluku, who make up almost half of the population. In Ambon, the Prabowo campaign mounted a charm-offensive on the Christian community, expounding a much more pluralist message than at national rallies. Here, the fact that Prabowo grew up in a multi-religious family, with a Christian mother and brother, is considered an asset, not a liability. Indeed, that fact is put front and centre of the campaign. One of the few national figures to jet into town during the last week of the campaign was Hashim Djojohadikusuma, Prabowo’s Christian brother and financial patron of Gerindra. To an exclusively Christian audience Hashim pledged that Christians, Chinese, Arabs and ‘even bule’ [westerners] would be safe under President Prabowo.

The appeal of each candidate’s personality or religious credentials, however, may not be the most important factor influencing the ballot here next Wednesday. In Sultra, where the PDI-P is weak, the Jokowi camp faces a set of powerful local elites whose party affiliation puts them on Prabowo’s side. Golkar networks are strong in Sultra and the head of the party, Ridwan Bae, is mobilising district tokoh-tokoh (respected community leaders) for Prabowo’s cause. Meanwhile, PAN’s domination of the local bureaucracy is formidable, and most people here assume that the governor, the mayor of Kendari, and 7 PAN district leaders around the province will be mobilising government staff, village heads and RT/RW (sub-village neighbourhood heads) to vote Prabowo-Hatta. Some of these local leaders might not even like Prabowo–last March most of the PAN elites believed Jokowi would clean up in Sulawesi. But patron-client networks undergird PAN’s party machine here, and orders from the top are usually adhered to. It’s unclear as to whether Kalla’s own clientelistic networks will trump those cultivated via PAN. But in Kendari at least, many people express fatalist sentiments when it comes to this election. They feel like PAN’s massive influence means that the result in Sultra is fait accompli, regardless of Prabowo’s popularity or otherwise. Fiery speeches to a small crowd at a Prabowo-Hatta volunteer event in Kendari (the Mayor is on stage behind) Credit: Warburton.

In the final days of the campaign, at a very small but fiery event of Prabowo volunteers, Mayor Asrul, also head of PAN’s Kendari branch, was up on stage loudly proclaiming that he and the Governor and all the RT and RW in Kendari will be voting for Prabowo. He urged that a win for Prabowo would ensure locals had more control over their natural resources, and that Hatta would help Governor Nur Alam to bring more development to Sultra. There was a bussed-in crowd of no more than 200 people. Credit: Warburton.

Meanwhile in Ambon, several prominent elites are likewise campaigning for Prabowo, such as Governor of Maluku and the Mayor of Ambon, who are both from Golkar. The Prabowo-Hatta machine operates out of a spacious facility in central Ambon, the so-called posko (coordinating post), strategically located around 100 metres from the Raya al-Fatah Mosque in a building reportedly owned by a Golkar figure. The senior campaign team consists predominantly of Gerindra affiliated personnel, including several members sitting in district assemblies as well as some “off-duty” civil servants. On most afternoons, leaders from the coalition parties, such as Golkar, PPP, and PAN gather here to plot the campaign, coordinate activities in the districts, and deliberate over who does what, where and when. PDI-P secretary DPC for Ambon City Jafri Taihuttu, listening to voters concerns on a blusukan to a market. Credit: Berger 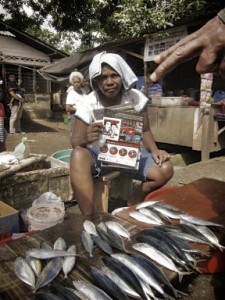 In contrast to the well funded and organized Prabowo-Hatta campaign, in both Ambon and Kendari, (as in other parts of the country) PDI-P is running on empty. For example, one of the key campaign events in Ambon during the last week of the campaign was a series of visits to markets around town by local PDIP members, accompanied by teams of volunteers. Jafri Taihuttu, secretary for PDIP Ambon and member of the Ambon city assembly, said that party members sitting in provincial and district assemblies throughout Maluku were asked to provide Rp. 1-2 million to fund volunteers on the day–a meagre sum. Yet a day earlier, a heated discussion had ensued at the PDI-P Ambon office about a particular PDI-P member who had refused to work in his electorate without being given funds. Jafrey paid his team of volunteers out of his own pocket, and needed to make a couple of phone calls to arrange payment for the cameraman that accompanied him. He said that ‘we do it the gotong-royong [a Sukarnoist principle of mutual help] way. People don’t work in PDI-P for the money’. Meanawhile in Kendari, PDI-P and the volunteers are virtually entirely self-funded. In contrast, Sekbernas Sultra, one of Prabowo’s volunteer organisations, has funding to bring village heads from around the province to Kendari to lobby for their support. In Kendari, as in Ambon, a few blusukan to sleepy pasar are no match for the resources and tactics of local elites and political organisations that form part of Prabowo-Hatta’s coalition machine. Whatever happens on election day, the following weeks are sure to see a frenzy of post-election analysis dissecting the factors that shifted the result one way or the other. Those engaging in this discussion ought to keep in mind that a large part of The Campaign took place not on twitter, at pop-campaign events, or TV-debates. A significant portion of Indonesian society lives in semi-rural backwaters throughout the archipelago, and they have experienced The Campaign as a dull routine of party machineries and familiar regional elites. Many of our observation confirm trends already noted by others. As Ward Berenschort concluded from his look at the PDI-P campaign in Lampung, it will be a remarkable feat if Jokowi’s personality and the commitment of his volunteers can penetrate these deep local networks of power and influence.

Eve Warburton and Dominic Berger are PhD candidates at the Department of Political and Social Change, Australian National University.