An American in Singapore: Devin Smith on the story of Lim Bo Seng

Devin Smith is an American musician/videographer who has written for Medium on Lim Bo Seng, Singaporean resistance fighter and regarded war hero. These are his reflections about how he came across this topic, why he was spurred to write about it, and what perspective he was writing from.

My wife’s work decided to relocate her to Singapore. She asked me if I’d come with her, and I said yes. A few weeks later, all of our possessions were tucked away into a storage space in San Francisco, and we were stepping off an airplane into thick tropical humidity. This is the first time I’ve lived abroad.

I had taken only the essentials: an AT-4033a microphone, a UR242 audio interface, and a small MIDI controller. I am a professional musician. The last several years I’ve been employed primarily transcribing and arranging pop songs for easy piano, while recording my own music on the side.

Because English is an official language of Singapore, it’s an easy city for Americans to navigate — but this is also, in a sense, misleading. One only needs to visit the The Former Indian National Army Monument to realize that sharing a language is no guarantee of understanding the complexity of this region of the world.

The average American (like myself) receives very little education about Southeast Asia. Unless she specifically decides to study this region at the collegiate level, the only history she will encounter is the war in Vietnam, Cambodia, and Laos — which is often focused more on the sociopolitical effects of the war on American citizens. Our own colonial endeavors in the Phillipines warrant only brief asides in textbooks.

Cognizant of the gaps in my understanding, I spent a lot of time at the library, refueling with nasi goreng and bibimbap at nearby hawker centers. The first time I encountered the term “Fifteen Years’ War” was in Peter B. High’s “The Imperial Screen”, a thorough account of Japan’s wartime film industry. This Asia-centric framework intuitively made sense: from the Japanese perspective, the American entrance into WWII was only a continuation of ongoing imperial expansion.

These are, of course, painfully 101-level observations for historians — but I, of course, am not an historian. My writing tends towards specificity only when I am trying to communicate as precisely as possible: my default (and perhaps more accurate) expression is in the freer, nebulous flow of art. During this period, the art I was making was likewise exploratory, meandering, unformed — musical sketches, odd blips of conceptual art, fragmented language.

For me, often a complete song will just emerge when the time is right. When I wrote “I’m A Witness”, it was (among other things) an abstract digestion of several months of feeling like my grasp of this region was limited only to vignettes. When planning the accompanying video, I decided to work in the style of a fellow Singapore interloper, Ozu: stripping away camera movement and color, focusing exclusively on formalist and center-heavy framing, using low tripod positions.

Over several days of filming, dripping in sweat, covered in 45 spf and pungent sketolene, I eventually found myself on a hill overlooking MacRitchie reservoir, staring at a black granite column embossed with golden lettering. The placards were informative, but infuriatingly brief. What was the aim of Lim’s agitation in the 30s? How did he end up in India with the SOE [Special Operations Executive] after Singapore fell? Who exactly were the guerrillas?

I spent the next month working my way through all of the English language material the NLB had available. It became clear that Lim’s story was also an accessible way to form a basic narrative of Singapore’s late colonial, wartime, and decolonization periods… but honestly, my decision to spend this time with Lim had a more emotional component.

My father’s father was a sort of jack-of-all-trades, and even up to his final years in his 90s, could recite certain poems from memory. Many people of my generation consider poetry exclusive to the rarified world of “fine art”, the only verses they know are, naturally enough, the lyrics to pop songs. Shining through the dusty screen of a microfiche reader, projected in white-on-black negative; seeing that Lim had given poetry a space in his journal alongside the chaos of war and the grind of espionage, I connected deeply.

Lim’s story is well-known and celebrated in Singapore, and my telling is not historiographically challenging. I am neither presenting new evidence, nor countering the prevailing narratives. What I am doing is pulling together many specific, disparate accounts to bring Lim’s story into a fuller context.

British authors often overlook Lim’s pre-SOE activism. Singaporean authors often include very few details about the MPAJA/MCP [Malayan People’s Anti-Japanese Army]/[Malayan Communist Party]. Many accounts on the internet are just overviews, and assume the reader already understands the socioeconomics of colonialism which would lead the British to prioritize resource extraction over defense mobilization in Malaya. Some of the most thorough accounts are tucked away in library reserves, or in the pages of long-since defunct newspapers.

I write history the way an SOE operative writes poetry. An ordinary person might memorize the lines and couplets of a verse in hopes of gaining a deeper clarity into the emotional state the poem brings about. I strive for a thorough, detailed account, because this story connects with me in ways I can’t adequately address using the figurative, oneiric language of art. 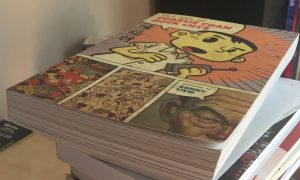 An embodied response to Sonny Liew's graphic novel and what it reveals about history-telling.