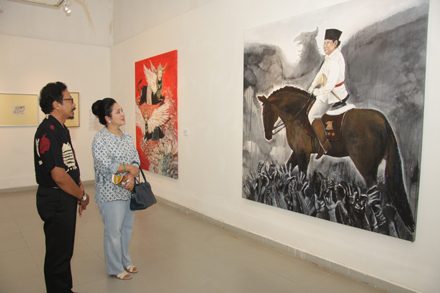 This campaign season (11-17 June), the prestigious National Gallery of Indonesia presented a cultural event inspired by the presidential campaign. It was called “Pe(s)ta Demokrasi”, playing on the government’s term for elections as a “pesta demokrasi”. Remove the “s” and you get “peta” or map of democracy. Its creator, Yusuf Susilo Hartono, took a longer-term and deeper look at the culture of democracy in Indonesia and expressed the results in a series of sketches, paintings, and an installation. YS Hartono outside his exhibition at the National Gallery of Indonesia.

YS Hartono (born East Java 1958) is a talented and award winning artist, but is also a respected journalist and poet. He draws on the now long experience of democracy in Indonesia, especially the most recent legislative elections of April 2014, to make visual readings of the fall-out from transactional politics. He asks his viewers to remember the massive and widespread corruption, vote-buying, and broken promises which accompany each democratic election. Is this what democracy means? Can a new President bring not only change, but enlightenment? Two viewers throw the “vote for Jokowi” signs, photographed by Muller Mulyadi in front of an eye-catching canvas of Megawati and Jokowi. Mega is depicted as the Qur’anic creature Buraq (on which the Prophet Muhammad journeyed from earth through the Seven Heavens and back again in one night) and Jokowi as a smaller winged creature, flying below her.

Hartono says his painting was completed before Jokowi agreed to stand as a presidential candidate, when Megawati’s party PDI-P was increasingly anxious about who their candidate would be. Jokowi had promised to govern Jakarta for the next five years but was pressured by Mega to step forward. Mega is placed above Jokowi because she is of the Sukarno lineage and Jokowi is not, and because he seemed uncertain about accepting nomination. The clouds of billowing ash beneath Jokowi’s hooves reflect the volcanic dust from Mt Kelud (East Java) which erupted during this period, bringing crisis to the surrounding region, but also fertility, just as Jokowi caused a crisis for PDI-P but also the promise of new beginnings. YS Hartono discusses his painting of Prabowo with the candidate’s ex-wife, Titiek. Unlike Jokowi, Prabowo’s ‘lineage’ as a candidate is well established and the painting shows a slimmed down, more youthful, and very resolute Prabowo. Seated confidently on horseback, Prabowo wears an unusual medley of clothing styles (Islamic peci, Western style designer boots, and Javanese kris, not placed behind but worn in front ready for combat) as he rides through the raised hands of the people, displaying a range of party hand signs. Prabowo is shown as a modern military man who sits astride a horse, dressed in clothes which send mixed messages about his true identity. Is Hartono asking his audiences to wonder who is the real Prabowo? Dominating the background is a huge Garuda (Prabowo’s Gerindra party symbol). Hartono has painted this Garuda as a sad, exhausted, tattered eagle, to symbolise the suffering of a nation whose wealth has been sold overseas leaving the homeland depleted and wasted.

Hartono depicts Jokowi as a Soedirman look-alike, painted against Indonesia’s national colours. The text is Jokowi’s statement when he accepted the mandate from Megawati to stand as Presidential candidate for the PDI-P.

Even if younger Indonesians do not know that General Soedirman (died 1950) was a military hero of the revolutionary struggle in the late 1940s, all citizens of Jakarta will recognise this figure. Soedirman’s giant statue, in his famous great-coat, broods over one of Jakarta’s most congested highways, named in his honour.

Wearing the quintessential Javanese headdress, with a kris ready for battle, and in a greatcoat that is in Jokowi’s trade-mark white, this representation of Jokowi shows him to be prepared for a presidential campaign, in contrast to the earlier painting. This painting might remind Indonesians that Soedirman led a guerrilla campaign against superior Dutch forces and faced divisions even within his own forces and among his fellow Indonesians. Jokowi’s slightly wary look suggests he is still not totally comfortable in his bid for the presidency, in contrast to the air of authority in the portrait of Prabowo. These two paintings and the installation of hanging figure and suspended nooses was displayed in a separate, darkened space entered through a half-open prison door. Hartono says some visitors screamed when they saw the nooses but then took photos to send to Facebook friends.

Hartono uses the space to shock viewers into reflecting on the depth of corruption which has become an enduring feature of Indonesia’s elections. The painting on the far left, of a judge handcuffed, shackled, wearing dark glasses (perhaps to indicate his inability to see the evidence and provide a fair trial), bears witness to the endemic corruption which operates at the highest levels, including the judiciary. Even the work of the Anti-Corruption Commission has been disappointing, and Hartono believes sentences have been too light and lenient. Behind the judge’s head a noose dangles as if waiting for the outcome of the judge’s own trial.

With hanging nooses and an executed body, is Hartono suggesting that only severe penalties will serve as a deterrent to continuing corrupt practices?

The painting on the right is more complex and ambiguous. Is the fallen book the holy Qur’an, and has the figure dropped it or is desperately trying to retrieve it? The title suggests that the figure is remorseful and is repenting past misdeeds, perhaps like the shackled judge. A sea of multicoloured hands clasp and clutch envelopes of rupiah notes against a background of finely written and beautifully patterned whorls of the word ‘Demokrasi’. These are the people who have sold their vote in the transactional politics which Hartono deplores.

Superimposed on the sea of hands is a chair (kursi) stamped with the emblem of the Republic of Indonesia, representing the parliamentary seats (kursi) which are at stake.

The white hands, free of bribes, remind viewers of the high percentage of spoiled or donkey votes which are now a feature of Indonesian elections. ‘Protect Democracy with Art’ – these words were written by Professor Wiendu Nuryanti, Deputy Minister Culture, Ministry of Education and Culture, after she opened YS Hartono’s exhibition at the National Gallery on 11 June 2014.

For YS Hartono what you see is not what you get in Indonesian elections. Democracy is being undermined by transactional politics. His exhibition does not support either presidential candidate but offers food for thought about each of them.

Virginia Hooker is an emeritus professor at the School of International, Political and Strategic Studies, ANU College of Asia and the Pacific.

Acknowledgements:
Yusuf Susilo Hartono for permission to reproduce his work and to Muller Mulyadi for all photographs.