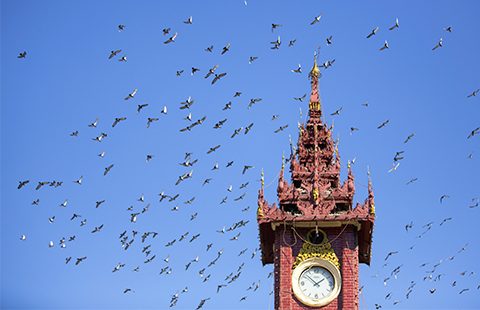 As the sun rises This column was published by The Myanmar Times on Monday, 24 August 2015

When you adjust your computer for “Yangon – Myanmar” you step into an unusual time zone. At UTC+6:30, the country sets itself apart from its neighbours: Thailand, Laos, China, India and Bangladesh. Nobody else, except for Australia’s remote Cocos Islands, keeps clocks on this time.

The idea, for many, is that Myanmar is different – an independent and unique place, where the pressures and predations of foreigners can be kept at bay. If put on the spot, all of Myanmar’s leaders take sanctuary behind the same barricades; the Golden Land is making its own way, in its own time.

The notion that the country is a special case, marked by history, geography, culture and politics, proves appealing – as such exceptionalism does – to the nationalist core. It has been an effective formula going right back to Ne Win’s time.

Indeed, those who feel that Myanmar offers something utterly unique will point to the time zone as a symbolic indication of that difference. Part of this impulse is born, no doubt, of the frustrations and resentments bred during the period of subjugation by the British colonial government.

During those years Burma was largely an afterthought in the British Indian Empire, and a place that was marginal to the great geo-strategy of the day. It has long been at the edge, whether that is of China or India.

It is Myanmar’s complex relationship with those large powers, and even its historical enemies in Thailand, that gives extra meaning to its stand-alone status. Being Myanmar, and holding tight to that idea, is one way to avoid being swamped by bigger, more powerful neighbours.

It is no surprise that under these circumstances guarding against the unravelling of the country’s unity has been a basic preoccupation for all national leaders. We should not expect that to change during the current period of political and economic transformation. “Non-disintegration of the union” – notwithstanding its old-style cadence – still matters for those who run the show.

Their anxiety partly explains why so much energy is devoted to connecting present-day ideas that Myanmar is special to some well-curated historical lineages. In Naypyitaw the connections to the imagined glory of former times, especially when the country was ruled by warrior-kings, gives firmness to today’s experiments.

The symbolism of these former kingdoms is writ large in the structure of the decade-old city, and helps to explain much of the art and architecture that fleshes it out. The message that echoes from the city’s vastness is straightforward; Myanmar’s glories cannot be denied.

Many countries seek to convey such messages about why they should be taken seriously. In Myanmar’s case there is much worth celebrating. It would be a great pity if its cultures and traditions simply melted away after too much exposure to the vagaries of the wider world.

Naturally enough, the extent to which the country would benefit from greater harmonisation with its neighbours is the subject of debate. Plenty of thoughtful people in Myanmar are anxious about what their front-row seats to future battles between China and India might mean.

They appreciate that the 21st century may not be kind to a country nestled between such giants. It happens that both India and China actually operate on one official time zone each: Indian Standard Time (UTC+5:30) and China Standard Time (UTC+8:00). This means that in each country more than a billion people set their watches for either New Delhi or Beijing time.

Not everybody in these countries appreciates the official clock: There are efforts in westernmost China and easternmost India to make the necessary local adjustments.

Would life be easier if Myanmar aligned its clocks with one of the neighbours?

In Southeast Asia, there is occasional talk that ASEAN could move to a common timezone. The standard time for the region would then be UTC+8:00, which is currently used in Singapore, Malaysia, Brunei, the Philippines and much of Indonesia. It would have obvious ramifications at the margins, especially in far northern Myanmar in the summer and winter months. Such a change would also mean Myanmar was on Beijing time.

For the moment, the proposal seems unlikely to move forward. This is mostly because ASEAN still struggles to find a commonsense view of its common purpose, at least one that will resonate with ordinary people.

This is particularly important in Myanmar, where for generations there have been huge investments in distinguishing the national culture from its immediate neighbourhood. There have been similar efforts to downplay aspects of the national story that don’t fit prevailing ideologies.

Being different is good and worthy, setting Myanmar’s own tempo likely prudent. But it would be a pity if such messages, and the histories they represent, got in the way of Myanmar’s further internationalisation and all the benefits to be harvested from better relations with the rest of the world.