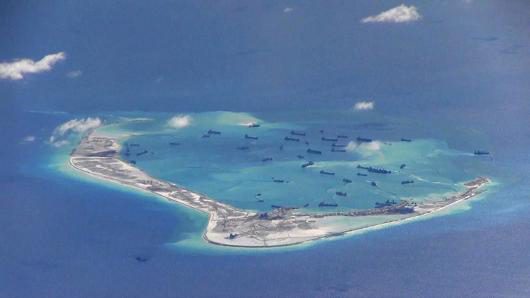 Subi reef being turned into an artificial island by the PRC. Photo: Wikimedia

ASEAN can’t afford to be hollow on regional tensions

Southeast Asian states need to maintain unity or risk irrelevance in the face of growing tensions and rivalry in the South China Sea.

Australia’s head of foreign affairs has issued a warning to Southeast Asian states that they need to maintain unity or risk irrelevance in the face of growing tensions and rivalry in the South China Sea.

Speaking at the annual Crawford Australian Leadership Forum, Department of Foreign Affairs Secretary Peter Varghese said the 10-member Association of Southeast Asian Nations (ASEAN) was well positioned to offer neutrality when it came to China’s territorial claims in the region, as well as the increased rivalry between Beijing and Washington.

China’s increasing assertiveness and recent building of militarised islands has not only got ASEAN offside, but drawn rebukes from the United States.

Mr Varghese said that the real test for ASEAN would come with the imminent ruling in the international court case between the Philippines and China over Beijing’s controversial nine-dash-line.

The case will rule on the line’s legality and determine who has territorial ownership in what are bitterly contested waters. Mr Varghese urged ASEAN to maintain a common position on the ruling.

“Ultimately the stability of the region is going to be characterised by the character and nature of great power relations – but there is an important role for institutions to help manage this transition,” Mr Varghese said.

“The role of ASEAN and the East Asian Summit is significant. EAS has the right mandate, and ASEAN is well placed to lead as it occupies the unthreatening middle – a neutral third party that has first order interests.

“But, there is no point having ASEAN centrality if it is hollow.

“This is why the Philippines arbitration case is so important – whether ASEAN can arrive at a unifying position that isn’t an anodyne statement is key.

“The arbitration is going to be a test for ASEAN. It’s important that ASEAN rises to that challenge, and it’s important because it touches on what kind of strategic culture we will have in the region – one that respects international norms and laws, or one that is based on might is right,” he said.

The session was moderated by Dr Nicholas Farrelly, Director of the ANU Myanmar Reseach Centre and co-founder of ANU specialist website on Southeast Asia, New Mandala.