The Malaysian government’s public airing of its criticisms of the ASEAN statement on violence in Rakhine State highlights fractures in the grouping and its inability to manage conflict in the region. Some have called for ASEAN to mediate the Rakhine conflict, based on ASEAN’s stated commitments to the rule of law and human rights.

But while it has undergone reform over the past two decades, many key practices have not changed and are unlikely to do so.

ASEAN underwent a suite of reforms after the Asian Economic Crisis. The grouping’s conspicuous absence from the recovery raised questions regarding its practices and purposes. Economic integration was subsequently intensified, ASEAN was restructured, and the scope of its activities widened. The centrepiece of the reformed ASEAN is the ASEAN Economic Community, entailing “free” movement of goods and services, and “freer” movement of labour and capital. It was signed into existence in December 2015, with the objective of building an integrated market in Southeast Asia, with 622 million people and an economy of US$2.6 trillion.

But more remarkably, after being known as a “club of dictators”, policymakers committed to democracy, human rights, and the rule of law. These claims raise questions given the strategies employed by authoritarian and post-authoritarian governments to suppress dissent.

ASEAN’s reform entailed the reorganisation of its activities, with the vertical and horizontal expansion of political processes. Activities are increasingly organised through regulatory networks, where issue-specific teams negotiate regional standards and norms, with these implemented domestically.

This has vertically expanded political processes by creating regional spaces of governance within national governments. It has also horizontally expanded political processes, as networks comprise people from government departments, civil society organisations, think tanks, academia, and scientific communities. The diversity of people involved has been central to ASEAN’s reform being touted as “people-oriented”. But this trend raises important questions regarding who is now involved in regional policymaking, and how.

The more things change, the more they stay the same

These reforms suggest substantial change, but many practices remain the same, notably in the areas of conflict resolution and human rights.

The rule of law was first acknowledged in ASEAN’s founding document but given little credence in light of the strategies—often violent—employed by governments to silence critics. The reforms after the 1997–98 crisis saw ASEAN slated to become a “rules-based community”, and heads of state signed the Charter in 2007.

Processes for settling disputes are central to the rule of law, because it is through these mechanisms that rules are enforced. The key document is the 2010 Protocol to the ASEAN Charter on Dispute Settlement Mechanisms. This outlines procedures for settling inter-state disputes, such as specifying how a complainant can request consultations and the period in which the counterparty must reply.

The Protocol, however, continues the practice of rule by law, rather than rule of law. This is because it is voluntary: both a complainant and the counterparty must consent to an arbitral tribunal being established. If the counterparty rejects this request, the dispute is then referred to the ASEAN Coordinating Council, who can direct parties to resolve it “through good offices, mediation, conciliation or arbitration”. Absent is the award of juridical authority to an entity mandated to objectively arbitrate on a dispute.

So despite commitments to the rule of law, ASEAN’s reformed procedures retain scope for protracted political and bureaucratic wrangling. Governments, consequently, have disregarded these processes, such as the Thai government flouting ASEAN mediation in the Thai-Cambodian border dispute in 2011. Or governments have sought alternative forums, shifting disputes to the governance scale most compatible with their objectives. For example, in 2008 the Philippine government requested the establishment of a WTO panel to settle its trade dispute over tobacco exports to Thailand, rather than drawing on ASEAN’s revised procedures. These limitations of the 2010 Protocol and governments’ disregard indicate that ASEAN’s reformed dispute resolution processes are inadequate for confronting the causes of forced migration. Similarly, on the issue of human rights, practices remain unchanged. The ASEAN Intergovernmental Commission on Human Rights (AICHR) was established in 2009. This was heralded as a watershed moment for the grouping. But the AICHR has been organised so it has limited scope to advance rights protections.

It has been situated within the ASEAN Political-Security Community, ensuring it operates in the shadow of hierarchy by reporting to states’ foreign ministers. As the “overarching” ASEAN rights body, it presides over related agencies, such as the ASEAN Commission on Women and Children. This arrangement limits the scope for more progressive agendas to emerge from related networks.

It has been established as a consultative body, without investigative capacities. Its Terms of Reference do not specify processes for engaging civil society organisations. The AICHR has used this to justify not engaging regional rights advocates, despite holding consultations with international human rights NGOs. This suggests an overriding concern regarding how it is perceived internationally, rather than regionally.

Its Terms of Reference also don’t specify its relationship to domestic rights agencies, notably National Human Rights Institutions, nor do they outline procedures for responding to petitions. This ambiguity means it is the people within these agencies, rather than petitioners, that determine the forum in which a petition is tabled and a course of action—if the AICHR were indeed to respond to any of the petitions it has received.

Finally, individual representatives have little capacity to shape the agency’s activities. It has comprised some well-known activists, such as Rafendi Djamin who was the Indonesian representative to the AICHR from 2009 to 2015 and its Chair in 2011. The inclusion of rights activists has been central to claims that ASEAN has widened policymaking. But the invoking of consensus decision making in this instance limits the capacity for individuals to exert influence, ensuring that attempts to advance rights protections are readily blocked.

These flaws are reflected in the ASEAN Declaration on Human Rights, developed by the AICHR and ratified by governments in November 2012. It has been widely criticised for its various loopholes, which activists have termed “ready made justifications” for rights violations.

Officials have deflected criticisms by pointing to the difficulties of achieving consensus, and argued that while the AICHR isn’t perfect, it could be improved over time. There is certainly the possibility that this agency can be reconfigured to advance rights protections. But governments have organised the AICHR to prevent it from achieving this objective.

So while ASEAN may appear to have dispelled with its former image as a “club of dictators”, examining how its rule of law and human rights commitments have been implemented reveals that political processes have not substantively changed.

Advocating for a different ASEAN

Civil society organisations have tirelessly campaigned around ASEAN’s reforms since the early 2000s. The detailed annual documenting of the AICHR’s limitations by the Solidarity for Asian People’s Advocacy Task Force on ASEAN and Human Rights charts how ASEAN’s rhetorical shift on human rights has been implemented so as to continue the grouping’s previous practices. Similarly, rights activists have long highlighted how the AICHR doesn’t measure up to equivalent entities in other regional organisations in terms of its mandate, powers, institutional structure and resources.

These analyses draw attention to the contingent application of the bundle of norms termed the “ASEAN Way”. Groups have documented how the invoking of the principle of consensus decision-making in the case of the AICHR has functioned in limiting its scope for rights protections. But this principle has been ignored in negotiations for regulatory reforms for the ASEAN Economic Community through the “ASEAN-X” approach, where governments can opt out of an agreement. Relatedly, Lee Jones’ analysis of the implementation of the principle of non-interference throughout the grouping’s history demonstrates that non-interference has never been absolute. It has been used or ignored in accordance with the preferences of dominant social groups as they seek to “impose their interests as raison d’état”. So important questions must be asked about why these principles are invoked in some circumstances, and disregarded in others.

Civil society groups’ analyses of not just what governments say they will do, but also what they have done, are crucial in documenting how ASEAN’s reforms reconfigure political processes. These analyses highlight that ASEAN’s rhetoric on the rule of law and human rights is more than just clever spin. It creates legitimacy for the grouping because it is attached to specific agreements (the ASEAN Charter) and agencies (the AICHR). And these mechanisms have been organised to continue previous practices, building support for ASEAN, while marginalising critics.

The sum of its parts

Underpinning this continuity in ASEAN is the lack of change in the political regimes that comprise its membership. Given this lack of change, it is unsurprising that authoritarian rule is once again ascendant in Southeast Asia.

Cambodia’s strongman, Hun Sen, is now leading the charge. Opposition leader Kem Sokha was charged with treason on 5 September, based on a pro-democracy speech he delivered in Melbourne in 2013. Radio stations deemed critical of the government have been closed down while a US-owned newspaper, the Cambodia Daily, was accused of failing to pay US$6 million in taxes and given one month to resolve the issue or shut down. The Cambodian government has also expanded its powers over NGOs operating in the country with the passage of its restrictive Law on Associations and Non-Governmental Organisations.

Meanwhile, President Duterte’s murderous war on drugs in the Philippines has been supported by his administration’s terminal cut to the budget of the Commission on Human Rights, from P649.484 million to P1000. Vietnamese President Tran Dai Quang’s recent call for tougher internet controls is the latest development in the country’s most recent crackdown on opposition voices. Likewise in Thailand, the junta installed after the coup in 2014, led by Prayut Chan-ocha, has furthered its attack on political opponents by issuing a second arrest warrant for Yingluck Shinawatra, who fled the country in August.

Indonesia has long been hailed as the region’s shining light in the democracy stakes, but democracy hasn’t addressed the country’s high concentration of power and wealth. The recent mobilising of Islamic identity against Ahok in the Jakarta gubernatorial election has also heightened concerns regarding religious moderation. Richard Robison and Vedi Hadiz argue Indonesia’s political and economic trajectory can be attributed to the powerful oligarchies that continue to dominate the country. The country’s oligarchs have determined programs of privatisation, decentralisation, and democracy. Their interests are favoured by existing arrangements and they may have no need for—or would not benefit from—the kinds of political change that critics demand.

The majority of ASEAN’s political regimes only superficially pluralised decision making and authority. And the region’s dominant social groups are again deploying the tools available through both institutional processes and the use of force to shore up their power and silence opponents.

A different ASEAN would entail the pluralisation of decision-making and authority. ASEAN’s commitments on the rule of law and human rights indeed create important leverage points for advocating for a different ASEAN. But the way in which these commitments have been implemented to support the region’s dominant social groups mean it’s likely that advocates of ASEAN playing a greater role in mediating conflicts and advancing rights protections will continue to be disappointed.

This post appears as part of the Regional Learning Hub, a New Mandala series on the challenges facing civil society in Southeast Asia, supported by the TIFA Foundation. 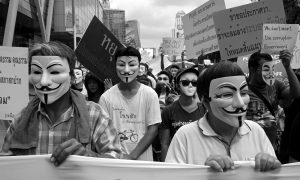 It’s past time for us to ditch simplistic ideas of “civil society” and its relationship with democracy in the region.