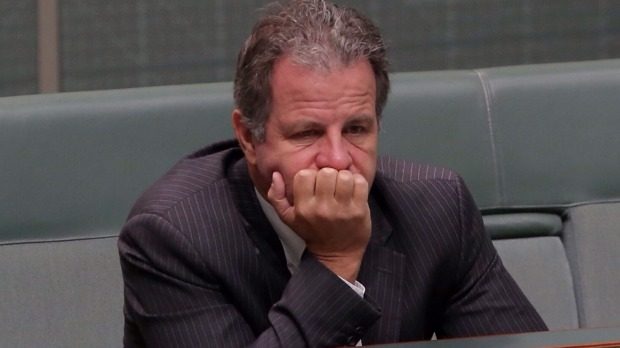 ‘Sexy’ war story would have Said in a lather – for all the wrong reasons.

Australian federal MP Dennis Jensen has come under fire for revelations he used his parliamentary letterhead to seek publication of a racy novel that depicts Australia miraculously winning a fictional war against an Indonesia-China coalition.

Sky Warriors, which Jensen penned in 2002 and pitched to publishers in 2007, is a literary disgrace that appears to be a cross between 50 Shades of Grey and Australia’s obsession with being invaded by hostile Asian neighbours.

With a target audience that can only be narrowed down to Orientalist-erotica reading war-enthusiasts, the story features an evil, Australia-hating General Rajiv Rono and his young, constantly braless brown-breasted mistress. He is ultimately defeated by Daniel Jarman, an Australian man who also has a vibrant sexual romance with a very young Jakarta local.

The book contains the following choice bit of titillation;

Yasmine didn’t believe in wearing bras; in fact, she really didn’t need to wear them as her breasts were still as firm as they had been in her late teens. Rono massaged her small, soft brown breasts, luxuriating in the silky complexion of her skin. He moved his hand up her inner thigh. ‘Yes,’ she moaned. ‘Do it now, please, don’t wait any longer.

The steamy text has led other writers guessing at what else readers have to look forward to — perhaps the following?

The secrets of the ocean, Jarman reflected, were harder to understand than the mind of a woman, and Jarman would know, because he’d done sex with dozens of them. In fact, he’d only finished some sex minutes before he came to the ocean to look at it. He was thinking about this sex – the no clothes, the good breasts, the sex oils – when his mobile phone rang. It was the prime minister.

“These decadent Australians,” he sneered, only he sneered it in Indonesian, because that is what he spoke. “They will feel the might of my displeasure, and when they do they will be crushed.” Nervous aides noticed that when General Rajiv Rono had said the last part about crushing, he had crushed a half empty packet of chips in his hand.

Cockington Green is an attraction in Canberra which features displays of miniature buildings.

Jensen, who is also on the Australian Parliament’s Joint Standing Committee on defence and foreign affairs, defended the Mills-and-Boons-esque writing, stating: “Basically, the reason for the racy section in the first place is my Dad is a journalist and also has written a couple of novels, and he was told by publishers that you needed to have at least one racy scene in the book, so that’s why I included it.”

He also defended trying (unsuccessfully) to publish Sky Warriors under a pseudonym, saying “I didn’t want to damage foreign relations between Indonesia, China and Australia.”

There is also evidence that Jensen, who is also interested in cars and aircrafts, originally tried to self-publish the book under his real name in online car-enthusiast chatrooms.

Although the Minister is downplaying the incident as a na├пve choice made during his first term, it isn’t exactly rocket science that publishing a cringe-worthy novel about war and sex with Asian nations is not an appropriate action from a Government figure.

Then again, Dr Dennis Jensen, a trained physicist with aspirations of becoming the Minister for Science,
doesn’t believe in climate change and thinks speeding is a “road safety revenue lie”.

Dr Jensen has since been dumped by his party in a pre-selection ballot taking place over the weekend and ahead of federal elections later this year. He blames the move on the leaking of his ‘risque read’.

If his political career ends, at least he can always go back to writing.