It is not widely known that Australia possesses a unique and longstanding Southeast Asian community with its own ethnic identity and dialect. However, for thirty years, the Malays of the Cocos (Keeling) Islands, have been citizens of Australia. In this article, I recount how the islands and their residents became part of Australia.

2014 marks the 30th year of the integration of the Cocos (Keeling) Islands into Australia. In 1984, the Cocos Malay residents of the Cocos (Keeling) Islands voted in an Act of Self-Determination to become a part of Australia. This was the culmination of a larger transformation that made local residents formally entitled to the rights and responsibilities of Australian citizens. This larger transformation also brought an end to more than 150 years’ rule by a single family–the Clunies Ross dynasty.

Briefly, the islands had been first settled in 1826 by a British adventurer, Alexander Hare. He brought with him a group of indentured labourers collected mostly from Southeast Asia. Another party of Europeans, including Clunies-Ross, arrived soon after and settled on another island. In 1827 Clunies-Ross wrested effective control of this colonial enterprise for himself and succeeding generations. 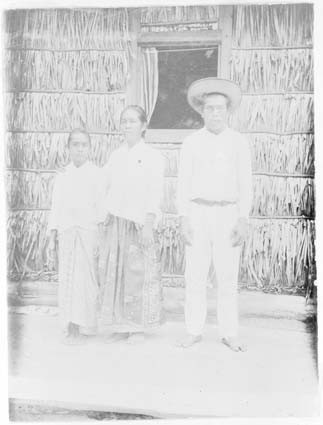 Cocos Keeling Island Workman with his Wife and Daughter (1902) Source

Different sovereign arrangements formally underwrote this control. In 1857, Britain annexed the islands. Through the next century, they were supervised by British colonial offices in Ceylon, the Straits Settlements, and Singapore. The intervening years saw the development of a coconut export industry, Queen Victoria granting the Cocos Islands to the Clunies-Ross family, a WWI navy battle, and a WWII air force base. In 1955, the islands were transferred to Australia. Australia’s government initially exercised little influence over the daily lives of Cocos Malays. Thus, throughout this time, the lives of Cocos Malays residents were characterized by one enduring theme: the Clunies-Ross family exercised effective control.

A time for change

In the mid-1970s, the Australian government became more involved in the life of Home Island, ushering in important changes. This seems to have been precipitated by a UN committee dedicated to implementing independence for colonized peoples. The committee made specific reference, in 1970, to the Cocos Islands having the right to self-determination.

A delegation was also sent in 1974 in Canberra. Three Cocos Malays, Cree Haig, Alpan and Feyrel, travelled to the Australian capital to meet with the UN team that was to be sent to assess the situation on the Cocos Islands. The three men were accompanied by Jim Dixon, the manager of the Clunies-Ross estate, who acted as translator during the ensuring interviews and meetings. Arriving on 2 August, Cree, Alpan, Feyrel and Jim Dixon were met by Peter Lawler, Secretary of the Department of the Special Minister for State, at the airport where they were met by press and briefly interviewed. They stated at that time that on 3 August, the three head men met with the UN Mission team in order to discuss the position of the Islanders in relation to the ‘outside world’ as well as the wants and needs of the Islanders after the decolonisation of the Cocos Islands. After this meeting, the UN Mission visited the Cocos Islands twice. It was not just the UN taking a direct interest in the Cocos Malays. In 1975, a new office of Administrator was created by the Australian government to assume a more direct role with regard to education, labor and so on. Cocos Malays were to given the option of taking Australian citizenship. The Clunies-Ross token money was to be replaced with Australian currency. A local government was to be established to advise the administrator. These were but some of the alterations to daily life.

End of the dynasty

These changes led the way to more substantial transformations. Almost all the land was still owned by Clunies-Ross, but in 1978, the Australian government acquired this for 6.5 million, leaving only a small package of land, which included the family mansion, to the family. The local government became a formal Council taking ownership of the village area. Cocos Malays were no longer working on the land of ruler as his subjects. But what next?

“By December 1983, the leaders of the Cocos community informed the government that they were prepared to proceed to an act of self-determination. The Secretary General of the United Nations was informed and was requested to dispatch an observer mission to the islands. The act would take the form of a plebiscite in which the inhabitants would choose one of the three options.”

The three options were independence, free association, or integration with Australia. The following votes were recorded “Independence, 9; Free Association, 21; Integration, 229; Informal, 2” (Tahmindjis 192). The ‘Act of Self-determination”, as it was called, was decisive. By June of that year, the integration was legally complete. Cocos Malays had now tied their lives, and those of their descendants, to the nation of Australia. The “smallest act of self-determination ever” (Tahmindjis 192) was one of the most important events in history of the Cocos Malay people. Subsequently, in 1984, three Cocos Malays, Parson Yapat, Cree Haig and Wahin Bynie, along with translator Tony Lapsley, travelled to New York to announce the Act of Self-Determination to the General Assembly. It was now official in the eyes of the world: the Cocos Malays of the Cocos (Keeling) Islands had decided to integrate with Australia.

They became what could now be called Australia’s oldest, continuously Islamic and Southeast Asian community.