[UPDATE Monday 26 July: Have a look at this graphic from the Bangkok Post. 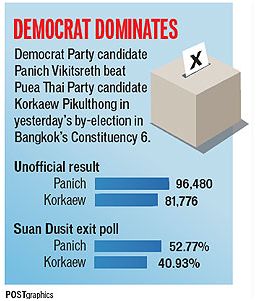 Clearly doing the percentages on the actual count (rather than the exit poll) is beyond them! For the record, their figures show 54% to the Democrats and 46% to Pheua Thai. ] [UPDATE 10 PM Canberra time: The most recent count is 53% to the Democrats and 46.5% to Pheau Thai. I’d be interested to see some reader comments on what they think the result means. I think it’s a result that both sides can live with – not much different to the result in 2007 (52% to 48%) if you take the other minor parties out of the 2007 count. Abhisit can claim some endorsement of his government’s position. At the same time it shows that Pheua Thai are still a strong political force. Under the rather extraordinary circumstances I think 46.5% to Pheua Thai will please the reds much more than it pleases Abhisit. I don’t think this vote will make Abhisit any more inclined to a general election.]

The result in today’s by-election for Bangkok Constituency 6 will be a useful pointer to the popular credibility of the Abhisit government’s reconciliation roadmap. The following graph summarises the results from the 2007 election (summing the votes recorded by all the candidates for each party). It was a close-run thing. My feeling is that unless the Democrates win well, with a solid increase on their 2007 vote, their political fortunes will be looking rather shaky. If Pheua Thai can muster 40% or better it will be a pretty good result under the circumstances. By the same token if Pheua Thai achieve significantly less than PPP got in 2007 it will suggest that the actions of the red shirts have come at some political cost. 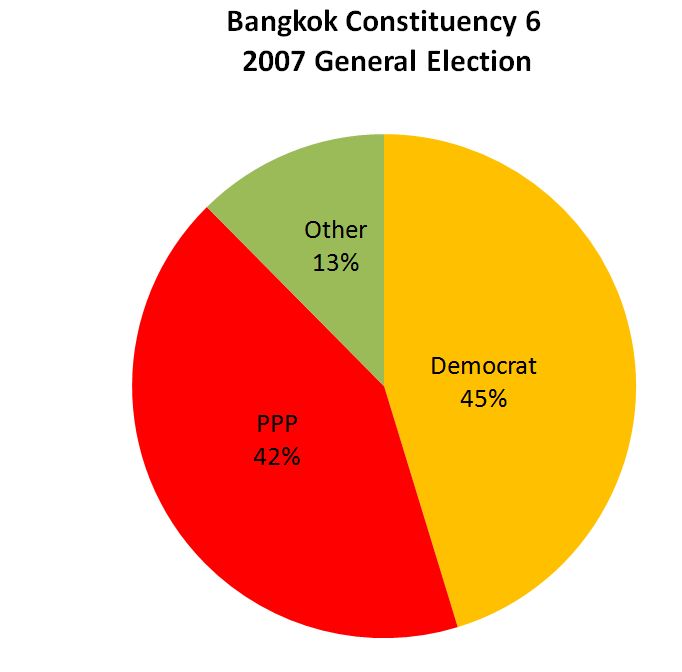