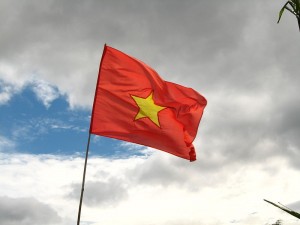 Bill Hayton, who wrote the authoritative chronicle on contemporary Vietnam,Vietnam: Rising Dragon (Yale Press, 2010), says he has been denied entry to the country despite being invited to a government-sponsored conference on the South China Sea. His book, which is full of dirt on top leaders and their families, might be to blame.

Vietnam has, despite earlier progress, more recently seen a reversal of fortunes for writers and bloggers. Hayton said this on the VSG listserv:

Vietnam is a country that bans authors because of what they write. I know this because it has just happened to me. Two months ago the Diplomatic Academy of Viet Nam invited me to attend its annual East Sea conference. Today, standing at the airport check-in counter at Heathrow Airport, I finally abandoned my efforts to get there. It’s a huge disappointment – the conference looks excellent and it would have been a chance to properly understand the Vietnamese position on the East Sea disputes. Now the book that I am writing about those disputes will have to go ahead without a Vietnamese perspective. All because of the Vietnamese Ministry of Public Security.

It’s taken two months of emails and phone calls to get to this point. For the past week the Diplomatic Academy has actively been trying to find a solution, in the past few days the British Embassy in Hanoi has also been trying to help. Today came the confirmation – my visa has been refused by the Ministry of Public Security. The Embassy told me as I was waiting by the check-in desk.

The only reason the MPS can have for banning me is because it doesn’t like the book I published two years ago, ‘Vietnam: rising dragon’. It can be the only reason – I have no contact with dissident organisations, I have never plotted to overthrow the Party or the state and I have never committed an offence against Vietnam’s immigration laws. Of course, when I was the BBC reporter in Hanoi, six years ago, I regularly broke the Press Law – but then every foreign journalist in Vietnam breaks the Press Law, almost every single day. It’s impossible to be a foreign journalist in Vietnam without contravening the Law’s draconian restrictions.

So why am I a threat to Public Security? Does the MPS think my book could really destroy the leading role of the Communist Party of Vietnam? It’s a fair, honest and balanced portrayal of modern Vietnam. That means it contains both praise and criticism – honest accounts of how the political system works, how the Party maintains its hold on power and how it relates to the outside world. Little of it is new to most Vietnamese people: they know most of these things very well. I think my offence was to say these things in public – and in English – where foreign governments and aid donors can read them. Vietnam: rising dragon has been well received. At least one American university recommends it to students studying Southeast Asia. No-one has told me about any mistakes or inaccuracies, no-one has called it biased or unfair.