Humans cutting down forest land to farm is nothing new. However, charging rural farmers for causing global warming is. A controversial formula is quantifying the damage villagers have to pay for their small scale farming. Now, the villagers are taking a stand against what they know is wrong.

PHETCHABUN – Early one Thursday morning, a gun was pointed at Ms. Kwanla Saikhumtung, a 34-year-old mother, because she was farming.

They refused. The villager that hired them paid taxes on the plot, leading the villagers to believe they had a right to work the land, and they worried about finishing their work.

The officers quickly became annoyed. One threatened to shoot any villager that resisted the officers’ orders.

“Are you really going to shoot? I’m here to harvest the corn, and you want to shoot us?” Ms. Kwanla shouted. She then bravely grabbed the barrel of the gun, pressed it to her chest, and said, “If you’re going to shoot, shoot.”

The officer lowered his gun. That night, the officers marched the reluctant villagers through the community and drove them to the police station.

This incident was the beginning of a seven-year-long legal battle, pitting Ms. Kwanla against the Thai government. She and the other twelve villagers — the youngest only sixteen at the time — were first charged with trespassing.

The real shock, however, came when they were slapped with a 470,000 baht fine for contributing to global warming under the charge of causing environmental damage.

As the landowner was paying taxes on the plot of land in question, he had the right to grow crops on it. Since Ms. Kwanla and the other villagers had been hired to harvest his corn, it had seemed that they were not breaking the law by being there. However, unknown to the landholder, his plot overlapped with the wildlife sanctuary land.

The Huay Kontha villagers have a running joke, “Because we pick the corn, the world gets hotter.”

The charges that Ms. Kwanla and the other villagers face shed light on an emerging trend in Thailand. Land dispute issues are becoming increasingly common. According to Pramote Pholpinyo, coordinator of the Northeast Land Reform Network (LRN), there are currently 35-40 “global warming” cases against villagers in Thailand, with charges amounting to almost 33 million baht.

While many of these trespassing charges are currently on appeal, the LRN has launched a countersuit against the Department of National Parks, Wildlife and Plant Conservation in the Administrative Court of First Instance.

Kritsada Koonarong, a lawyer working with Environmental Litigation and Advocacy for the Wants (EnLAW) on the countersuit case, says, “this case is the first where people faced with this issue have come together and rose up to fight.”

A lawyer working with the Huay Kontha villagers who wishes to remain unnamed, believes that whether villagers win or lose the countersuit, it is important to fight this case: “We know we might lose, but we have to fight anyway… So that society will know even if we do not win.”

Thailand’s forestland rapidly decreased throughout most of the 20th century. By 1998 only 25 percent of the original forestland remained. Since then, the Thai government, through the Ministry of Natural Resources and Environment (MNRE), has taken a hard-line stance on reforestation by creating a network of national parks, reserves, and sanctuaries. As a result, between 1979 and 2004, forestland tripled. This system has undoubtedly been effective in increasing forestland, thereby decreasing greenhouse gases.

The borders of these areas, however, were created with Global Positioning System (GPS) technology rather than with the more accurate Geographic Information System (GIS) technology. As a result, borders separating the forest areas and village farming areas have become unclear.

These border disputes have also led to debate over villager’s historical claims to the land. A veteran RFD official, Dr. Permsak Makarabhirom elaborates, “The proclamation of an area as a national park effectively makes ‘illegal’ residents of people who had settled these areas years before the proclamation.” The overlapping claims on protected forest areas are affecting approximately two million people across Thailand.

According to Dr. Vute Wangwacharakul, a climate change expert, “Thailand has been doing its best to mitigate greenhouse gas emissions and adapt to the impact…of climate change.”

Though Dr. Wangwacharakul recognizes that the creation of forest reserves is “one important tool” in combating climate change, he also admits that “any expansion of forest land would have trade-offs with other land uses and the affected parties are mainly the rural poor.”

The global warming fines that the villagers must pay are calculated using a formula created in the 1994 by Dr. Pongsak Wittawatchutikul, a National Parks Department specialist. With this formula, a thermometer is used to measure the temperature of soil in degraded land and soil in forest land. The difference in the temperatures is calculated. Then an estimate is made about the amount of energy it would take to cool down the hotter deforested area using an air conditioner. This calculation, along with an approximation of the number of trees cut down and the amount of soil loss, determines the fine.

A National Parks Department report says the formula was created with the intention of “finding the value of ecosystems with the support of academic people from human rights committees.” Lawyers involved in the countersuit question the legitimacy of this formula, first used in court in 2004.

Dr. Ponsgak’s formula has also faced criticism from the academic community. A climate change specialist and director of Geo-Informatics and Space Technology Development Agency, Dr. Anont Sanitwong na Ayutthaya, argues, “Scientists agree that this doesn’t make any sense at all…it has nothing to do with global climate change.”

Even Dr. Pongsak himself came out against the use of this formula to fine villagers. In an interview with the National Human Rights Commission, he recently said, “I accepted that some parts of the formula needed to be fixed, and I’ve tried to make it the most accurate and correct,” but due to the complexity of the government systems and procedures, he has not been able to make such adjustments.

However, many government agencies continue to affirm the formula’s legitimacy. Mr. Thongchai Siripattananukulchai, Director of the Region 11 Protected Areas Office states: “I think this formula has been studied well enough to be used… It is legitimate, therefore we are using it.”

Today, Thailand is the only country that has attempted to quantify damages and fine its citizens for contributing to global warming. The Department of National Parks also admits that Thailand is the first country to even think of charging citizens in this manner, says Mr. Kristada.

According to the UNFCCC, industry and energy production account for approximately 75 percent of Thailand’s greenhouse gas emissions. But to date, only small-scale farmers have been charged with environmental damage, using the global warming formula. The focus on villagers is disproportionate, and does not focus on the real producers of greenhouse gases. Dr. Wangwacharakul claims, “Emissions from fossil fuels are the most important factor contributing to climate change.”

The unnamed lawyer working with the Huay Kontha villagers acknowledges that Thailand has implemented sound environmental regulations. Yet, it does not punish private industrial companies harshly enough for violating these regulations. “In terms of economics and business internationally,” he says, “it would cause a bad image for Thailand.”

When asked about charging industries with environmental damage, Mr. Thongchai of the Protected Areas Office claims, “all parties will be treated equally regardless of if they are companies or individuals.”

If used fairly, the Environmental Quality Act holds much potential for mitigating climate change in Thailand. According to Mr. Kritsada, “the environmental law was intended for the people who destroy the environment to get it back to its original state.” However, to get to the root of the problem, the relationship between industry and the environment must be further scrutinized if the true perpetrators are to be held responsible.

Meanwhile, Ms. Kwanla continues her life as an agricultural laborer, now harvesting cassava and onions. She says that she has to fight back on principle. “I want to show them that I am not wrong. If we accept the charges, that is saying I am wrong.”

While she has not been to court since last February, and does not know when her next court date will be, she remains hopeful.

Her village stands by her side in support, because she represents their communal struggle, and that of hundreds of other farmers throughout Thailand.

“Every time I go to court, most of the villagers come and support me, every time… The judge knows that when I come, it gets crowded.”

The story in images No longer able to harvest corn since the lawsuit, Ms. Kwanla and her fellow villagers now harvest cassava and hom jean, a local onion variety. Since being charged with global warming, villagers have begun working on farms farther from the reserve, harvesting cassava. The man in red was one of the thirteen villagers who was charged along with Ms. Kwanla. A fellow villager labors in the field harvesting cassava. Every morning the villagers must wake up extremely early to travel to the field, as it is located thirty kilometers outside of the village. Standing in front of her humble home in Huay Kon Tha village located in Petchabhun Province, Ms. Kwanla prepares to join her fellow villagers at the nearby cassava fields. Ms. Kwanla uses charcoal to cook her breakfast of an omelette and grilled frog accompanied with the ever ubiquitous sticky rice, a common meal among rural Thai villages. While being charged for contributing to global warming, Ms. Kwanla’s regular electricity use consists of only two light bulbs, a television and a washer and dryer.. Sitting in her home, Ms. Kwanla discusses how the charges have affected her husband and her two daughters who are all currently living at home with her. Ms. Kwanla’s home is comprised of two small rooms. She uses little electricity other than two light bulbs, a television and a washer and dryer. 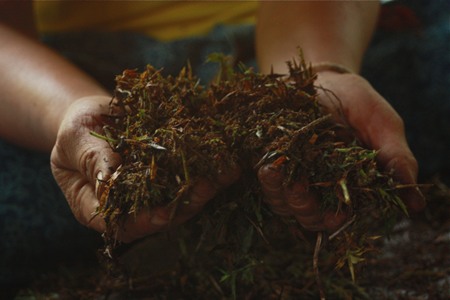 Since being charged after harvesting corn Ms. Kwanla has begun growing and selling hom jean, a local variety of onion, on her farm.