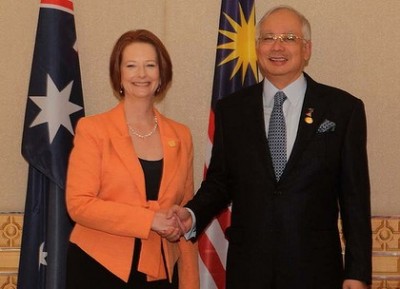 Earlier this year Bob Carr threatened Papua New Guinea with sanctions if they delayed their elections.

Has Bob Carr moved from regional bully to a proper diplomat?

His exchange with Sen Nick Xenaphon suggests however a fear of the Malaysian administration. Malaysia has of course, under the present administration, been a very useful ally to Australia.

Senator XENOPHON (South Australia) (14:46): The tear gas was real, Minister Carr. Mr President, I ask a supplementary question. Given Australia’s role in being part of international observer teams in other elections in the region and internationally, what role will the Australian government take within the Commonwealth to ensure that the Malaysian elections are clean and fair? Will, for instance, the government consider giving its support to an international observer mission in the lead-up to the elections given the concerns raised by Bersih and others? For instance, if the opposition leader requested such assistance, what would the government do?

Senator BOB CARR (New South Wales–Minister for Foreign Affairs) (14:47): Whether we send observers to a Malaysian election would be a matter for the Malaysian government. We would not have any way of initiating such a proposal; we would respond to a request from them for election observers. I understand that the Malaysian Election Commission itself may be seriously considering inviting international observers to monitor the election. I understand the Malaysian government has argued that the last election must have been fair–it lost its two-thirds majority in the parliament (Editor’s emphasis). Again, I have got to say that this is a matter for Malaysia. Our high commission will consider following reporting very carefully and speaking to participants on all sides of Malaysian politics so that the Australian government will have a sense– (Time expired)

[Excerpts above are from the HANSARD]

Could the Malaysia solution be clouding the Foreign Minister’s and the Australian Government’s priorities?

Which raises the really important question.

How can Australia – government, legislature, society – play an effective role to help democratise this region (Southeast Asia in particular) which are filled with despots, dictators, authoritarian regimes, bigots, and corrupt government and leaders?