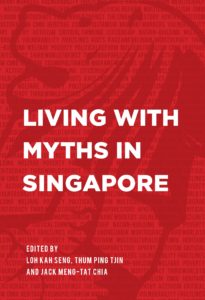 Living with Myths in Singapore is an eye-opener for anyone who has grown up on the institutionalised Singapore stories.

From a young age, the average Singaporean is exposed to tales of the island’s catapulting itself from third world to first, and then fed a constant stream of pride-inducing narratives designed to demonstrate the nation’s success in overcoming abandonment by Malaysia, racial strife, economic struggles, and a constant siege by unfriendly neighbours. To be a citizen of Singapore was to delight in the tiny state’s ability to overtake others in the region in terms of development, economic progress, and “civilisation”. The larger and more unwieldy members of ASEAN were always depicted as those who were envious of Singapore’s progress, and constantly in need of assistance and advice from the island’s growing pool of local and resident international experts in countless fields.

Philip Holden (in Chapter 7) defines myths as “our way of telling a common sense story of the past”. The editors cite Roland Barthes as they point out that the distinguishing mark of myths are their “naturalness”—in other words, myths are stories that are taken as true and “historical”. But “history”, whether people realise it or not, is man-made. Singaporean stories taken as “history” seem to dangle off the edge of reality—and once unpacked, are revealed to be nothing more than myths created, embellished, and perpetuated for whichever use best suits national institutions, the state, and the media at the time.

I was born in Singapore but didn’t grow up there. Instead I travelled the world in a Singaporean bubble, perpetuating the national myths that engendered respect and awe. The occasional holiday in the homeland had the same impact on me as it did any foreigner. We were taken in by the sheen and shine; the spotlessness, safety and efficiency—and we all believed the myths. As an adult, spending my work hours in the “star” of Southeast Asia after decades abroad, the sparkle seems to dull a little. Murmurs on the ground help peel away the layers of flawless cling wrap to reveal the wrinkles and scars of those who lived all their lives in the Little Red Dot.

Living with Myths in Singapore cleared all the doubts that couldn’t be publicly proclaimed and confronted. The book unpacks the myths to reveal the reality hidden beyond the singular “history” that is perpetually propagated. It fills in the fissures of the fables that niggled because the “common sense” didn’t quite make sense—but couldn’t be questioned. The book’s use of researched, academic histories based on multiple sources, facts, and evidence counters the myths and provides previously obscured insight into the truth behind the tales.

Thum Ping Tjin (Chapter 2) and Gareth Curless (Chapter 12) break down governance in Singapore from World War II to the present, and show how the threat of communism was a bogeyman invented to maintain power and quell dissent. In the 1980s, the Law Society was also curtailed to prevent it from truly representing the people. According to Teo Soh Lung (Chapter 13), its efforts to provide independent legal aid was tarred with accusations of political interference, and laws were sped through to ensure that the society remained focused on approved and apolitical cases. Singapore’s popular political economy narrative attributes the island-state’s success to its leaders’ ability to consolidate power and pursue the “authoritarian Singapore model” of development through foreign investment. This is dissected by Seng Quo-quan (Chapter 9), who posits an alternative take on political freedom and social democracy through the eyes of James Puthucheary.

The Singapore Story, as scrutinised in the book, slides effortlessly from effective governance to economic success, and chronicles the island’s speedy ascent to First World status from the doldrums of a native fishing village and coolie slums. Philip Holden (Chapter 7) suggests an alternative narrative that is a tragedy; one that recounts unparalleled and unexpected initial success, but then struggles and falls in its pursuit of economic growth and wealth at considerable social expense. “Economics is about getting rid of poverty; it’s not about making people richer”, was a statement Holden attributed to Professor Thomas Silcock, whose students included Goh Keng Swee and Lim Kim San.

As Singapore skyrocketed to unparalleled heights, the national narrative emphasised the need for self-reliance and family support before social welfare. Ho Chi Tim (Chapter 8) points out that on the contrary, other histories and scholarship detail myriad examples of social support positioned under the framework of justice and equal opportunities. At the time, these were not deemed to undermine a fair society. Yet, in spite of the reminder by Professor Silcock, as some Singaporeans become wealthier, poverty persists—albeit made invisible by popular myths. Teo You Yenn (Chapter 23) lays bare the realities of poverty in Singapore, where capitalist exploitation is compounded by assistance eligibility criteria that brands hard working low income citizens as failures, instead of victims of adverse social conditions. Temporary migrant workers are the unseen backbone of Singapore’s success. Charanpal S. Bal (Chapter 24) unpacks three popular myths surrounding these labourers, and explains how the myths have stood in the way of effective legislation and protection for the very people who literally built the island nation.

Part of the Singapore public relations package is its position as a global media hub and the centre of innovation and technology. Terence Lee (Chapter 6) traces the evolution of media in Singapore through its political history and brings to light a “media hub” that is politically well-managed yet deemed apolitical, and used as a tool for economic growth rather than for communication and discourse. Arthur Chia (Chapter 11) likens innovative projects in Singapore to a performance “in the global theatre of science and technology”, both to govern nationally and to ride international technological winds for economic benefit. Beyond myth-making to boost its international reputation and generate economic gain, Singapore also has domestic myths which help to control and manage its citizens. The book assembles these myths in sections that portray a vulnerable and deficient people who need top-down intervention to protect them from themselves. Lee Kah-Wee (Chapter 10) explores the issue of the casino and exposes the economic truth behind both the claims of morality and the “new business model” of the Integrated Resorts.

Issues of race, multiculturalism, cosmopolitanism and culture wars make up another mythological hotspot that requires scrutiny. Laavanya Kathiravelu (Chapter 15) deconstructs the perennial threat of racially-instigated violence and the myths of racial harmony and meritocracy that hinge on colonial categorisations of “Chinese-Malay-Indian-Others” (CMIO). Lai Ah Eng (Chapter 16) reflects on the difficulties of navigating Singaporean multiculturalism through shared spaces, employment and citizenship and highlights the need for cohesion, inclusion, exchange and appreciation in order to transition from myth to reality. Elaine Lynn-Ee Ho (Chapter 18) and Liew Kai Khiun (Chapter 19) discuss the crises of affinity and loyalty of new immigrants and at the same time, the dilemma of imported values and beliefs that are deemed contrary to Singapore’s “conservative family values”. In much the same vein are chapters on public apathy and the lack of activism and critical civil society. Loh Kan Seng (Chapter 20) and Edgar Liao (Chapter 21) show that contrary to popular beliefs, civil movements are alive and well in Singapore, and that the accusation of apathy had historically been used to prevent dissent and discontent from boiling over into decisive action against those in power.

All countries use myths to nurture a national storyline for identity formation. Mark Baildon and Suhaimi Afandi (Chapter 3) question the effectiveness of the singular history taught in schools, and Christine Han (Chapter 4) provides evidence of the ineffectiveness of the existing school-based citizen education. All the writers in this edited volume appeal for a revolution in Singapore’s national narrative—one that allows for open discussion of alternative histories and evidence-based scholarship on historical events, as well as true inclusivity in policies and economic plans.

Singaporeans of the future should be able to perceive as “common sense” the possibility that there are many views, and should be able to find it natural that there is more than one narrative given the complex evolution of this island nation of immigrants. That Living with Myths in Singapore was allowed to be written, printed, and distributed is a huge step in this direction. It is also, hopefully, a positive indication of more accurate “myth-making” to come. Serina Rahman is a Visiting Fellow in the Malaysia Programme at the ISEAS-Yusof Ishak Institute, Singapore, conducting research in the fields of sustainable development, environmental anthropology and the economics of the environment. Serina co-founded Kelab Alami, an organisation formed to empower a Johor fishing community through environmental education for habitat conservation and economic participation in coastal development. She received her PhD in Science from Universiti Teknologi Mara in 2014.