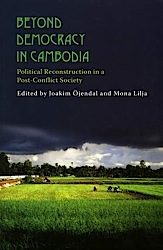 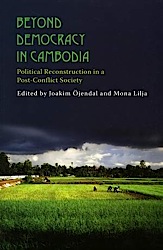 Joakim ├Цjendal and Mona Lilja, eds., Beyond Democracy in Cambodia: Political Reconstruction in a Post-Conflict Society.

On 23-28 May 1993, Cambodian citizens aged 18 and older cast their ballots–for the first time after the collapse of the Khmer Rouge regime (1975-79)–in a long-awaited election organized by the United Nations Transitional Authority in Cambodia, or UNTAC. This election was expected to transform Cambodia into a condition of “normalcy” in the wake of protracted civil war and political conflict, to open a new chapter in the lives of Cambodians, and to pave the way for post-conflict reconstruction as well as democratic transition and consolidation.

Beyond Democracy in Cambodia examines the battle between these two major challenges–post-conflict reconstruction and democratization. It clearly suggests that the former has won the battle at the expense of the latter. Cambodia has been ruled by the authoritarian Cambodian People’s Party (CPP) for more than three decades, and with no tradition of democratic practice, Cambodia has–like many other post-conflict polities–had a very bumpy ride toward the promotion and deepening of democracy. International efforts to bring liberal democracy to the country have, one must conclude, hardly scratched the surface.

The volume includes ten chapters, by Cambodian and non-Cambodian researchers intimately familiar with the country’s situation. In Chapter I, its editors, Joakim ├Цjendal and Mona Lilja, contend that Cambodia’s achieving liberal democracy is highly unlikely, at least in the predictable future, because of political culture and deeply rooted patronage system on the one hand and the absence of prerequisites for democracy on the other hand. The editors also link democracy to political legitimacy. They write that “legitimacy is the ‘quality indicator’ for assessing the ‘realness’ of Democracy” (p. 10). ├Цjendal and Lilja further argue that a recipe for political legitimacy requires three ingredients: impartial rule of law, establishment of accountable and sustainable political institutions, and achievement of popularity.

This opening chapter is followed by a splendid array of critical essays on elections, Cambodia’s judicial system, decentralization, women’s political engagement, foreign aid, Buddhism, and the Extraordinary Chambers in the Courts of Cambodia (ECCC). These essays enrich our understanding of political reconstruction, democracy, and legitimacy in the Cambodian context.

In Chapter II, Caroline Hughes offers a close examination of national elections in Cambodia. She is skeptical about whether democracy with political legitimacy can be promoted in the country by means of elections. Elections are used as only a political show to gain external legitimization rather than as a force for democracy.

In Chapter III, Kheang Un discusses the Cambodian judiciary, which he regards as incompetent, corrupt, and politically manipulated. Because of a scarcity of resources, low intra-institutional collaboration, corruption, clientelism, and the absence of a separation of powers (reflected in the intervention of the executive in judicial matters), the judicial system has failed to implement the rule of law effectively and impartially. This failure has undermined the promotion of democracy and legitimacy in the country.

In Chapter IV, Kim Sedara and Joakim ├Цjendal touch primarily upon the decentralization reform, which was a strategy for state reconstruction in Cambodia after the 1993 national elections. The authors make the bold claim that the decentralization reform was “probably the most progressive and successful of all current attempts at rebuilding statehood in post-conflict Cambodia” (p. 129). They elaborate on how both local political arrangements, especially at the commune level, and the current political structure were strengthened as a result of the reform. Democratic decentralization served as an instrument of local democratization, regime legitimacy, and post-conflict reconstruction, the latter in the form of stability in local communities.

In Chapter VI, Sophal Ear explains the impact of foreign aid on political legitimacy in Cambodia. The author argues that, while the extent to which internal legitimacy has been achieved using foreign aid is contested, the Cambodian government has earned external recognition. He warns that aid alone could not be a substitute for a true democratic process. This has been the case in Cambodia, especially when the government has received foreign aid with no or few conditions from non-traditional donors such as China, which have not set liberal agendas–such as protection of human rights and promotion of democracy–in their aid programs. Furthermore, despite the massive flow of aid into the country, rising inequality and corruption can be experienced or seen in different walks of life.

John Marston’s Chapter VIII examines the role of the religion in Cambodian society since 1989. He demonstrates that, as its revival swept the country in the 1980s, Buddhism played a contributing role in recreating and increasing political legitimacy.

Chapter IX, by Laura McGrew, questions the effectiveness of the ECCC and its trials of Khmer Rouge figures. McGrew highlights obstacles to the credibility and independence of the ECCC, the attainment of which could contribute to increased political legitimacy for the Cambodian government. While obstacles ranged from unclear government motivation to inadequate funding, the deepest concern was the design of the ECCC itself. As part of the Cambodian judicial system, the author argues, the ECCC has been dominated by Cambodian judges, with only a few international judges. It has been flawed and subject to political interference. These factors could leave a scar on political legitimacy for the government. McGrew’s points parallel those made in Kheang Un’s chapter earlier in the volume.

Beyond Democracy in Cambodia has three limitations worth noting here.

Second, the editors are correct to write that the political opposition in Cambodia has been weakened by the ruling party, the CPP. Nonetheless, the argument that “voters may remain loyal [to the CPP] simply for lack of a viable alternative” (p. 8) can, from the perspective of 2014, be refuted. In the July 2013 national elections, the challenger party, the Cambodia National Rescue Party (CNRP), grabbed a historic 55 National Assembly seats, while the incumbent ruling party gained the remaining 68, winning only a marginal victory and losing its two-thirds majority in the legislature. These results have the significant implication that the CNRP was a viable alternative, especially to younger members of the electorate. Those voters believed that the CNRP would perform better than the current CPP-led government, especially in dealing with such pressing issues as deep-seated corruption, nepotism, environmental damage, high commodity prices, illegal immigration (from Vietnam in particular), land-grabbing, and low wages for public servants and garment workers. These issues are the most serious concerns among Cambodian citizens, as reported by the International Republican Institute (2014), which carried out a nationwide survey of Cambodian public opinion with a sample of 2,000 respondents from 28 October to 10 November 2013.

Last, in Chapter VI of Beyond Democracy in Cambodia, Sophal Ear argues that in Cambodia the effort to gain “external legitimacy has enjoyed significant success” (p. 173). However, how external legitimacy was built to such a high degree is not thoroughly discussed. Did foreign aid contribute to increased external recognition? The argument would be more cogent if the author explicitly addressed this question. It might be true to assert that Cambodia’s government has gained an increasing level of external legitimacy since normalcy returned to the country in the 1990s. It should be noted, however, that the promotion of its external legitimacy on the world stage has also been rocky, as safeguards for human rights and the deepening of democracy, each presumed to be an indispensable prerequisite of legitimacy-building, have been absent in the country. In addition, the United States’ recent cut in foreign aid channeled directly to the Cambodian government and other possible international actions against the CPP government in the wake of the allegedly unfair elections of 2013 may signal that its international recognition has been called into question.

Readers should not let these shortcomings discourage them from turning to Beyond Democracy in Cambodia. Even today, there is so much to learn from this meticulously written volume. As the first study systematically to investigate the post-conflict democratization process in Cambodia, this thought-provoking work has significantly contributed to our understanding of post-conflict reconstruction, democracy, and political legitimacy. It also lays an intellectual foundation for ongoing and future debates on democracy and democratization in the country. Finally, it should be a must-read book not only for teachers and students of political science in particular, but also for Cambodian bureaucrats and policy-makers in general.

Virak Thun holds two master’s degrees, one in political science from Northern Illinois University and another in international peace studies from the United Nations-mandated University for Peace in San José, Costa Rica.