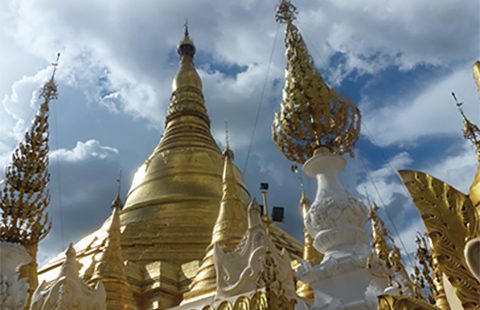 Reviewed by Will Womack

Rapid changes in Myanmar in the past few years have posed a challenge to authors.

Current political and economic conditions are a moving target, and the speed of change threatens to make any analysis obsolete before it can appear in print. Richard Cockett’s Blood, Dreams, and Gold is no exception, published shortly before the milestone elections of November 2015.

Even so, Cockett’s volume presents a lucid and well-informed overview of the origins and outworkings of Burma’s transformation leading up to those elections. The author amassed an impressive file of interviews as Southeast Asia correspondent for The Economist from 2010–14. With a firm grasp of the relevant scholarship, Cockett weaves these into an account of contemporary issues in Myanmar which is personal, accessible, and important.

The book is divided into two parts.

The first presents a selective historical overview of Burma since the colonial era, organised around JS Furnivall’s concept of the “plural society.” Readers who have a firm grounding in Burmese history may safely skip over the first three chapters. Each chapter in Part Two explores a theme of current interest. political Buddhism, Sino-Myanmar relations, democratic politics, and economic development are brought into vivid relief.

In his first chapter, Cockett presents a tour of Yangon tracing the social geography of the plural society under British rule. Readers new to Myanmar’s history will find this a useful device, as they explore the architectural traces of the colonial city’s ethnic quarters. Indian immigrants are in sharp focus here, due to their prominence in the city, in the colonial economy, and in the relationship of their story to the contemporary Rohingya issue. Away from this area of focus, however, there are serious distortions in the way the narrative is presented. The Chinese population is seriously downplayed, for example, and the growing but significant suburban Karen enclaves are ignored.

The next two chapters continue the historical background, focusing on postcolonial backlash against the plural society. The nationalist movements, wartime politics in the 1940s, and the policies of the military regime are presented as manifestations of that backlash. The historical narrative here is pared down to themes that reflect this nationalist agenda, emphasising xenophobia and issues of current concern. The postwar parliamentary government of U Nu, for example, merits only one sentence in the political narrative of chapter two, re-emerging briefly during a discussion of language policy in chapter three. This is not a general history, but one which narrowly serves the analysis.

Chapters four and five focus on the peace process with ethnic separatists in Kachin, Karen, and Shan States. Here Cockett weaves in eye-opening perspectives on the issues of cultural politics, Chinese investment, and illegal drugs. Alarming statistics emerge from the interviews–60 to 80 percent of people in parts of Karen State are reported to be either taking or dealing illegal drugs. These chapters conclude Part One’s narrative of plural society by drawing attention to the failure of Burmese state-building in the ethnic regions.

Part Two provides a gold mine of perspectives from Cockett’s interviews in contemporary Myanmar. The chapters in this section are purely thematic and there are often jumps in chronology between sections.

Although many have drawn comparisons between the corruption, conflict and poverty of Burma and that of Sudan and other African nations, Cockett’s experience as a journalist in both regions lend his observations a particular weight.

The harrowing description of conditions in rural Chin State and of the accounts of conditions for political prisoners in Insein jail are moving and important. Equally important are the accounts of Myanmar Egress as a “third force” between the military and the NLD, and of Chinese reactions to the halt in construction of Myitsone dam. Cockett has done a great service by putting these voices in print, and they will equally useful to academic researchers, students, journalists, and general readers with an interest in contemporary Myanmar.

Inevitably there are errors and distortions that should be addressed in any future edition. The Judsons (Baptist missionaries in the 1800s) did not end up in Burma merely from being blown off course. Phayre Street in Yangon surely honored Sir Arhur Phayre as the first Commissioner of British Burma, not for his contributions to history (p 79).

Cropping up in a discussion of Chinese investment in Kachin State, “Karen” (p 127) seems like it should read “Kachin.” And the assertion that “Karenni are a subgroup of the Sgaw” (p 131) is controversial for several reasons. Finally, the handful of notes are very inconveniently collected at the end of the book. Footnotes would be more useful. These are minor points that do not diminish the overall value of the book.

The book’s title is taken from a poem by the Chilean poet Pablo Naruda, who was appointed Honorary Consul to Rangoon in 1927.

In telling the story of his appointment, Naruda recalled that he didn’t even know where the city was. He searched an old map and found Rangoon where there was a hole in the paper.

Blood, Dreams, and Gold promises to put Myanmar on the map for many readers, and to fill a number of holes in our understanding of its ongoing political transition.

Will Womack teaches history at Alabama State University and works on Myanmar-related public history projects as a research associate of the American Baptist Historical Society.