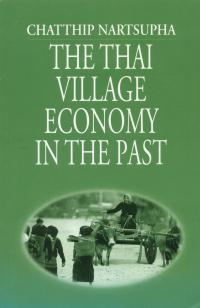 EDITOR’S NOTE: It is worth pointing out that this book review interacts with some of the the key themes examined in Andrew Walker’s new edited collection, Tai Lands and Thailand: Community and State in Southeast Asia.

This little book has made a contribution to Thai economic thought far beyond what its modest size would suggest. First published in Thai and now translated into English, the volume was received sceptically when it first appeared in 1984. Surely, its critics said, educated Thais did not need to be told that peasants planted and harvested rice, fished, gathered forest products, and wove cloth. But the main thesis arguing for the longevity and viability of the subsistence economy in Thai villages well into the twentieth century challenged received wisdom about the impact of international trade on village life. As the alternative development paradigm of communitarianism has taken hold in Thailand, The Thai Village Economy in the Past has become one of its foundation texts.

Based largely on interviews with villagers, the study constructed a picture of peasant production from memories that reached back to the late nineteenth century. According to Professor Chatthip’s reading of this evidence, self-sufficiency characterized the mode of production in premodern times. Villagers produced their own food, cut timber from the forest for housing they built themselves, and made production tools such as fish nets, baskets, and boats. While villagers relied on subsistence production for their own needs, they were also crucial participants in the international export trade. Their role in this trade was to collect forest products such as hides, metals, bird nests, sapan and sandal woods, lac, beeswax, and wild cardamom. Because these products were taxed heavily by the Siamese court, the producers received little remuneration for their effort. Labour power was provided by the household and by exchange arrangements within the village and with neighboring villages. Reciprocity, cooperation, and close kin relations made the village community cohesive.

In Chatthip’s analysis the belief system congruent with this mode of production invoked the power of ancestral spirits and animated nature, thus tying together tied together the living and the dead in a mutually strengthening bond. Buddhism ‘blended’ with earlier beliefs but also introduced a rationale for social and class division. Equality in the premodern mode of production was thereby replaced by classes of rulers and ruled, with Buddhism explaining socio-economic class in the way it apportioned merit. Those who ruled deserved to do so by virtue of the merit they had accrued in previous lives. Quoting one interviewee to the effect that peasants accepted their lot because they had less merit than their superiors, Chatthip subscribes to Marx’s famous dictum about religion as the opiate of the masses.

The Bowring Treaty of 1855 broke down this mode of production in several ways. No longer could the Siamese court regulate the amount of rice exported, nor could it monopolize the trade in forest products. The countries that had demanded the treaty – initially England, but subsequently the other Western imperial powers – had colonies to feed, and rice became a commodity in great demand. The central plains quickly became a giant rice bowl. While paddy farming had not been so widespread before the treaty, by 1907 the amount of rice exported had grown to 40 percent of the total amount of Siam’s export product. As a result of external demand, Siam’s economy had changed from subsistence to commercial-for-export. In the north, south and northeast of the country, where village communities were more removed from the demands of the international market, the subsistence economy endured well into the 1930s.

So far, this narrative is familiar and unexceptionable in the economic history of mainland Southeast Asia. In many respects the economic history of Siam’s central plains, where the floodplain of the Chao Phraya River was dedicated to rice production, is identical with the histories of the floodplains of the Irrawaddy River in Burma and the Mekong River in southern Vietnam. There too canals and irrigation works were built to make the deltas agriculturally productive. The main difference is that in the colonies to the east and west of Siam this process of farming the land for export production resulted in land alienation, indebtedness, and tenancy, whereas in Siam the social costs of the export economy were lower. Yet Chatthip insists that villagers were neither confident nor happy about these changes, and he highlights many examples of unjust consequences such as landlessness and usurious interest rates that other economic historians would minimize. Wage labor and class division appear in this story of peasant livelihood as unwelcome protagonists. Villagers resisted or ‘were dragged into the market system’ with great damage to their hitherto stable if marginally prosperous way of life. They contended with the changes by falling back on older production methods, refusing to succumb to the capitalist market economy thrust on them by global economic change.

What distinguishes Chatthip’s account is its Marxist framework, which to some readers may seem crude and anachronistic. The premodern economy sounds very much like Marx’s primitive commune. There is no account of slave society, and Siam skips to the next stage, saktina society, which corresponds more or less to feudal society in Marx’s unilinear progression of social formations. The capitalism forced on the domestic economy was not liberating but destructive, ‘penetrating’ the village and dragging unenthusiastic peasants into an economy and way of life that ill-suited them. One is reminded here of the resounding phrases of The Communist Manifesto as the bourgeoisie forces its way on the rest of the world. Cheap commodities are the heavy artillery with which the bourgeosie batters down walls thrown up to oppose it.

In Thailand some capitalists — rice millers, for example — were progressive, but the system lacked the landlords and bourgeoisie to be found in other burgeoning economies who would transform the economy into the next mode of production. Tax farmers, who might also have been the catalyst for transformative change, were parasitic, ‘squeezing’ surplus from the village and extracting maximum profit by means of trickery and manipulation. Personally, I am not put off by this rhetoric, whose overtones serve as a background echo of the ideological battles of the 1970s when Thailand’s political system was challenged and changed forever. This volume is a worthy heir to that history.

In earlier versions of this thesis Chatthip toyed with a modified version of the Asiatic Mode of Production (AMP) to explain Siam’s underdevelopment. In the AMP the state monopolised the technology of production by managing centralized irrigation systems, leaving the village untouched and permanently underdeveloped. In the present study Chatthip turned away from the AMP and rejected some of his earlier work that failed to recognize the extent to which the subsistence economy flourished well into the middle of the twentieth century. Yet the system stalled, as it were, and failed to develop, because capitalism was fostered by — or was in cahoots with — the state, which sought to keep the village dependent. The state and capitalism are outside institutions, foreign and unnatural to village life, and villagers resent them both.

In the interest of sketching the arguments I have not done justice to the detailed account in the book, which, in any case, may disappoint those economic historians who have been charting the demise of the peasantry as a social class. Chatthip has here written a counter-narrative to the story that tells of the death of the peasantry. For this is an economic history of a peculiar kind, a polemic that comes close to valorizing and advocating a way of life fast that is disappearing. In this respect Chatthip shares with his teacher, Karl Marx, an ethical view of the science of economics even if he does not share the urban Marx’s dismissive contempt for the ‘idiocy’ of rural life. In the face of criticism that he has romanticized or idealized the Thai village economy in the past, he sees the village as a resilient, cohesive social unit with features that can be modified and strengthened to withstand the realities of the global economy.

Chatthip has educated several generations of Thai economic historians. Many of them have become academics, and many have entered the Thai civil service. His approach to economic history has had repercussions in Thai debates about development and the impact of the global economy on small producers. Even before the 1997 financial crisis he had embraced community culture as an alternative response to the unintended consequences of rampant growth. As with all thinkers who influence their times, he has a holistic approach to his work and life, and that approach is manifest in these pages.

The book is lucidly translated by Dr Chris Baker who, with Pasuk Phongpaichit, has written an afterword with important biographical and historiographical insights. I recommend this book to all students of the region with an interest in peasant production, modern historiography, and alternative economics and regret that so few volumes from Thailand’s rich scholarly literature find their way into English language.