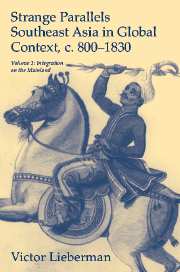 This hugely ambitious project, marked by the publication of this, the first of two volumes, aims at nothing less than the repositioning of mainland Southeast Asia in world history. Whereas the comparative framework in premodern times is usually taken to be the Indic world or China, the one proposed here is Eurasia. The Strange Parallels in the title, which Victor Lieberman argues are really not so strange but susceptible to explanation once the historical record is understood, refer to synchronous political and cultural consolidations he identifies in Burma, Siam, Vietnam, France and Russia. Japan also exhibits the same patterns. Lieberman is fascinated by administrative cycles, and in this respect the book builds on his earlier work in premodern Burmese history. Best of all, this historian is well-organized, a definite strength in a book as large and complex as this one. His lectures must be a treat for the student note-taker.

After outlining his main theses in the introduction, Lieberman offers detailed case studies in three lengthy, exhaustively documented chapters on western, central, and eastern mainland Southeast Asia. These are the chief mainland societies, corresponding roughly to Burma, Siam and Vietnam, which exhibit territorial consolidation and a growing uniformity of religious practices, languages, and ethnicity. Vietnam, “the least coherent territory in the world,” was neither as complete nor as sustained in the integration it achieved as Burma and Siam. Lieberman concedes that his theme of integration privileges metropolitan elites at the expense of peasants and other subalterns but argues that enormous numbers of people, not merely central elites, were affected by the evolution he documents. He invents his own vocabulary for following dynastic growth. Early Southeast Asian empires are termed “charter states” in view of their foundational role in future developments. The “protected rimlands” — northwestern Europe, northeastern Europe, Japan and mainland Southeast Asia — lie on the periphery of older civilizations.

To make his case for the strange parallels Lieberman seems to have read everything. He is familiar with major works in European history — environmental, political and economic — and he has drawn on numerous conference papers, unpublished doctoral dissertations, and personal communications. He is unique among historians of the region in venturing to link climate change and oceanic currents to agricultural productivity, arguing that unusually favourable climatic conditions c. 900/1000-1300 facilitated expansion in later generations. One of the reasons the book can aim to be so comprehensive and that Lieberman can take on so much of the region without competence in vernacular languages aside from Burmese is that he has taken advantage of a wide network of Southeast Asianists, generously acknowledged their assistance, and consulted them over the ten years of the project’s gestation. This collaboration enables him to cover a thousand years of mainland Southeast Asian history for each of the chief mainland societies. Only over this length of time, he argues, can the patterns be gleaned. The meticulously documented argument is daunting. For a single individual, it is a massive synthesis.

I have three observations. If diversity can be as easily “compared” as similarity, what is to be gained by comparison? Is Lieberman not comparing the incomparable? Despite the author’s qualifications, exceptions to generalizations, and scrupulous adherence to his own carefully managed criteria, these questions linger as the pages are turned. Second, the structural vocabulary of consolidation, integration, synchronization, transformation, fragmentation, feedback loops, and pattern is everywhere evident. Along with this structuralism there is an agreeably old-fashioned language of causation and consequence. In Lieberman’s history language is a transparent window onto the past, and words mean what they say. They are not mischievous things that play tricks on the unwary. Some readers will find this refreshing; others will wonder when the linguistic turn — even a watered-down version of it — will arrive on Lieberman’s desk. Finally, there is next to nothing about ideology, consciousness, and l’histoire des mentalités, i. e. the way people felt or perceived or looked out on the world. Perhaps there need not be, given the kind of history Lieberman has written, but the overall effect in this reader’s mind was an overly mechanical view of historical change.

Where are we to put this tome on the shelf? Perhaps when the second volume is published next to Arnold Toynbee and William McNeil, and certainly not far from D. G. E. Hall and Anthony Reid. In any case, it will be a long time before another historian bothers trying to understand why the mainland dynasties in Burma, Siam, and Vietnam were on the ascendant in the late eighteenth century as the Western imperial powers strayed into the region, provoked by economic competition and local political struggles that they found irresistible. For addressing this question with such seriousness and provocative argument Victor Lieberman is to be congratulated.