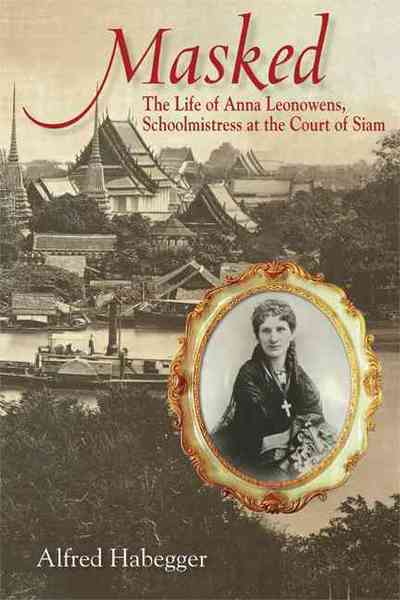 Alfred Habegger, Masked: The Life of Anna Leonowens, Schoolmistress at the Court of Siam.

Perhaps nothing demonstrates the power of Hollywood better than the fact that after several hundred years of interaction between Thailand and the West the most widely known personality on the latter side of the relationship is not Constantine Phaulkon, Sir John Bowring, Dan Beach Bradley, Gustave Rolin-Jaequemyns, Francis B. Sayre or even Jim Thompson, but a Eurasian woman of lowly origins, known to the world as Anna Leonowens. No fewer than three movie versions of Anna’s tenure (1862-1867) as tutor to the children of King Mongkut (Rama IV) have hit the screen since her exaggerated tales of life at the Bangkok court were brought back to public notice by the publication of Margaret Landon’s best-selling book Anna and the King of Siam in 1943. Now, the appearance of a second major scholarly biography in the last six years – and, oddly, one also written by an English professor — suggests the appeal of the historical Anna to contemporary scholars.

The author of the present volume, Alfred Habegger, denigrates — quite unfairly in this review’s opinion — his predecessor’s work, describing Susan Morgan’s Bombay Anna (Berkeley: University of California Press, 2008) “as lightly researched as it was highly fictionalized” (p. 13). In fact, much remains unknown about Anna’s early life. So biographers must fill in the blanks by drawing conclusions from incomplete documentary evidence and kernels of truth sifted from writings designed to obscure her origins. That said, Habegger has done remarkably thorough research, has uncovered new evidence — particularly related to Anna’s pre-Bangkok years — and puts forth plausible answers to a number of questions about her life.

It is now accepted that, despite her claim that she was born in Wales, Anna actually entered this world in India in 1831, the grand-daughter of an Indian or Eurasian woman married to a British officer in the army of the East India Company. When her father, Thomas Edwards, a British enlisted man, died before she was born, her mother promptly remarried one of his fellow soldiers, Irishman Patrick Donohoe.

A major point on which Habegger differs from Morgan regards the circumstances of Anna’s upbringing and early education. While Morgan believed that Anna grew up in the barracks, attended schools for the offspring of soldiers, and gained further education from the multicultural milieu of the city of Poona, Habegger provides circumstantial evidence linking her to the Byculla Girl’s Boarding School in Bombay. Anna herself stated that a key element of her education came when, as a teenager, she was taken on a tour to Egypt and Syria by Rev. George Percy Badger. While Morgan discounted the possibility of Anna taking such a trip, Habegger believes that she did, not as a sort of concubine as some have speculated, but in the company of Badger and his wife for genuinely educational purposes.

Another point relates to the difficulties between Anna and her stepfather, a man whose name she never mentioned once she had severed their relationship. Susan Kepner, another scholar who has studied Anna, saw Donohoe as a violent man who might have even raped and impregnated his stepdaughter.(*) Habegger goes quite far in the opposite direction, portraying Donohoe as a highly responsible father figure who provoked Anna’s wrath by opposing her 1849 love match and marriage to army clerk Thomas Leonowens (Thomas Lean Owens). Habegger points out that Leonowens proved as incapable of providing an adequate livelihood for Anna as Donohoe may have feared. He also suggests a religious basis for the latter’s ill will, as Donohoe was a Catholic. Although Anna later criticized Christianity, Habegger makes a strong case that she and her husband held Protestant fundamentalist views at the time of their marriage, and that she clung to such views during her sojourn in Southeast Asia. After all, her best Western friends in Bangkok were members of the American missionary community.

Unable to make an adequate living in India, Leonowens took Anna in 1853 to barren Western Australia, where they struggled and lost two of their four offspring. From there they moved to Singapore in 1857, and then to Penang, where Leonowens died in 1859. Anna claimed that he died from sunstroke after a tiger hunt, a story which Habegger thinks may have a basis in fact. Widowed with two young children, Anna returned to Singapore and opened a school. Apparently it failed to flourish. So the opportunity to go to Siam on a good salary proved irresistible.

Sending her daughter to a boarding school in England, Anna headed to Bangkok in 1862 with her young son in tow. Habegger believes that she suffered there from an intense insecurity and unhappiness that imperiled her health and pushed her several times to the brink of total breakdown. Morgan argued that Anna’s acute discontent with the state of affairs at the royal court sprang particularly from her view that the king’s many wives and concubines, some of whom became both pupils and friends, were treated like slaves. While Habegger agrees that this was part of the problem — recall that she had resented and overrode her stepfather’s objections to her own choice of a mate — he contends that Anna more generally saw Thai attitudes toward sexuality and marriage as abominations. But whatever the basis of her moral outrage, there is little doubt that it shaped her view of King Mongkut, whom she would portray in her writings as a lecherous tyrant.

Habegger makes a thorough effort to determine the basis, if any, for the various palace incidents described by Anna in her books, concluding, as others have, that she routinely and purposefully distorted and sensationalized. He strongly upholds the Thai view that she grossly slandered the modernizing monarch who hired her, and exaggerated her own importance, both in regard to her influence on the king and on his son and successor Chulalongkorn. Habegger also demonstrates Anna’s blatant plagiarism of others’ works, including a clearly fabricated story of a visit to Angkor Wat.

While Morgan suggested that Anna’s effort to establish a new identity as a well-educated, thoroughly British lady, the widow of an army officer, dated from her return to Singapore from Penang in 1859, Habegger points out that she could not have reinvented herself in as city where she and her husband had previously lived. But certainly Anna committed herself to erasing her real heritage after reaching Bangkok, where she is said to have responded to a letter from her sister by warning that she would commit suicide if family members sought to contact her there. She had fully crafted her new identity by the time of her arrival in the New York in 1867, at which point she decided not to return to Bangkok and began writing about her experiences there.

The move to America proved fortunate, as Anna not only found success as a school-mistress and popular author, but also subsequently gained even more renown as a lecturer. Good connections made through American friends in Singapore and Bangkok, and the general ignorance of Siam in the United States, facilitated Anna’s rise. As Habegger points out, her attacks on Siamese slavery resonated well in the American North in the immediate wake of the Civil War. While her books received critical reviews in England, in America the notices were positive, and no one attacked her credibility in any effective way.

By the time Anna’s popularity as author and lecturer faded, her daughter had married well, and she settled into a comfortable life in Halifax, Nova Scotia, with the daughter’s family. Safely ensconced and having fully established herself as a British lady, in her later years Anna would criticize the very Western religious and racial prejudices to which she had catered to during her personal reinvention and in her books. She had reinvented herself so effectively that Landon, herself a former missionary in Thailand, despite rather extensive research, accepted the truth of Anna’s stories. These tales, as repackaged by Landon and Hollywood, resonated once again with an American public now enamored of the transformative power of democratic ideology in the “American century.”

It is not difficult to see why contemporary writers are drawn to the story of an intelligent and determined nineteenth-century woman who found a way, deceitful though it was, to create an independent life, overcoming formidable barriers of race, gender and class in the process. Accordingly, despite his impressive research and excellent writing, one doubts that Habegger will have the final word on Anna Leonowens. Perhaps the Hollywood screen writers will have another go at her, too, but hopefully this time they will focus on the historical Anna instead of recycling and further fictionalizing her tales. Surely what we now know about her real life offers ample grist for a compelling film.