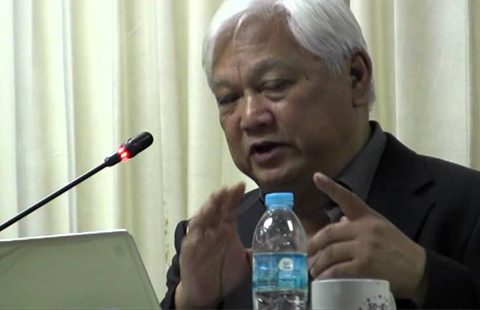 Thailand, for all its political stops and starts — or perhaps because of this — has unparalleled publically-engaged academics. Nidthi Eoseewong, Charnvit Kasetsiri, Thanet Aphornsuvan and many others relate academia to public life, pushing forward public discussion in a way that is enviable from a country (the USA, in my case) where scholarship is too often treated like either a business serving students or as a collection of irrelevant exotica.

Of Thailand’s public intellectuals, Chayan Vaddhanaphuti of Chiang Mai University looms large. Over the course of his career, Achan Chayan has worked to advocate for minority rights (risking death threats and accusations of treason) as well as building networks across Southeast Asian academic institutions. He exemplifies the best qualities of a Thai public intellectual, and thus it is no surprise that the essays in the liber amicorum, Scholarship and Engagement in Mainland Southeast Asia, edited by Oscar Salemink, are ringing with fond memories and praise for Achan Chayan across generations of scholars. Indeed, it is telling that even non-Thai-speaking scholars refer to Chayan as “Achan,” the Thai term somehow capturing this sense of Chayan’s public role in ways that “Professor” nowadays fails to.

My engagement with Achan Chayan came 10 years ago, when I was a graduate student doing field research in Chiang Mai. Like the best of mentors, Chayan, rather than imposing his own idea of what was important about my project, helped me think critically about my own work in multiple ways. As Michael Herzfeld remarks in his conclusion to Scholarship and Engagement, it was only later, after having completed my book, that I realised the depth of Chayan’s inspiration.

Overall, the volume is well put together, although a few essays ramble, and could have used another pass to refine and sharpen their general points. The book’s three sub-sections, too, are awkwardly titled. For example, “Politics, Activism, and Cross-Border Politics in the Greater Mekong Subregion” is the second, and “Scholarly Activism in the Greater Mekong Subregion” the third. These sections roughly correspond to an overview of Chayan’s work, its impact upon historical and anthropological work, and the thorny issues surrounding policy and minorities.

Charles Keyes opens the volume with the first section’s solo chapter: a brief biography of Chayan’s work and its impact upon Thailand and Thai studies. In an era when most work on ethnic minority issues was done by foreigners, and in the face of pressure from official state organs, Chayan pursued a principle of “speak[ing] truth to power” (p 17), pushing for a vision of Northern Thailand as a multi-ethnic and environmentally sustainable society with links across the region. It was a work that, as Keyes notes, was not without risk, and his chapter empahsises the personal commitment that Chayan gave to his causes.

In the second section, Olivier Evrard gives an example of socially-engaged history of the sort inspired by Chayan. Looking at French and Siamese records, Evrard charts the changing status of Khmu migrant labourers in the early 20th century. At first, these workers were governed by treaties between Luang Prabang and Chiang Mai, but as colonisation set in (external in the case of Laos, internal in the case of Siam), old relationships and networks became something else from the viewpoint of the central state: labor recruiters became traffickers, and migrant teak workers turned into a threat.

Evrard reminds us that migrants, as a category, are in fact created by state policy. This theme of the mismatch between detailed awareness of local situations and top-down policy returns in Christopher Joll’s chapter on Thai policy-makers’ essentialist understandings of the conflict in the South as compared with a multi-causal approach of the sort emphasised in Chayan’s work.

Shigeharu Tanabe’s chapter also deals with the issue of social engagement, looking at Northern Thai Buddhist meditation practices aimed at extinguishing the self that nonetheless provide a vehicle for addressing social problems and resisting political repression. It’s a welcome rebuttal to too-simplistic characterisations of Buddhist meditation as entirely inwardly-focused (Tanabe takes a well-placed jab at Deleuze here) and shows how practice, especially in the Northern kuba tradition, can be focused on social as well as personal transformation.

Katherine Bowie’s chapter takes a very different turn to more historically-focused studies, focusing instead upon her own experience of engaged scholarship in the 1970s. In an account reminiscent of classic anthropological fieldwork memoirs (see Powdermaker 1966; Levi-Strauss 1955,;Descola 1996), she describes a problematic introduction into a post-military coup Northern Thai field site and the tangled web of village politics that she encountered. As she attempted to assist in the organisation of a mat-weavers’ cooperative, class and other tensions within the community came to the fore in ways that were productive both for her scholarship as well as – eventually — the mat weavers themselves.

In the final major section, contributors address the thorny ground of development interventions, which too often avoid a deep engagement with local civil societies. Rosalia Sciortino, the former regional director for the Rockefeller Foundation (among others), effectively shows that theory is not divorced from practice even on the development side. This was particularly so during the 1990s when new technocratic interventions (the sort of thing dreamed up in TED Talks or Thomas Friedman columns) based around quick solutions and neoliberal integration came to replace civil society-based, locally-informed ones.

This philosophy of intervention oddly recalls those from the 1950s that fetishised the power of Western scientific knowledge to divine all of the solutions to the developing world’s problems. Similarly, in Ronald Renard’s contribution, we also see the fallout from a move in policy away from community-based solutions. He looks at the end of opium eradication projects in the isolated Wa region of Myanmar that emphasisedthe social origins of opium cultivation and addiction solutions focused on improving conditions for farmers, and the rise of a new, top-down approach that focuses upon law enforcement.

Building upon this connection between the assumptions of international (and national) organisations about local communities, Oscar Salemink’s own contribution to the volume examines the issues surrounding Intangible Cultural Heritage (ICH) in Vietnam. Salemink argues that the discourse of ICH in Vietnam creates certain possibilities and limits others, giving ethnic minorities a space within the state but limiting their role (and, interestingly, forcing the state to promote practices that they had just a few years before denounced).

But this also applies to scholars — in a state where open opposition is unproductive or impossible, Salemink argues that scholars are forced to work within the limits of state discourses. In Myanmar, however, Mandy Sadan shows how both state and resistant approaches carry their own risks. State discourses that present minority studies as “traditional” and (Kachin) minority studies dominated by the Baptist Church and ethnonationalism both fail. As a corrective, Sadan advocates for an as-yet unrealised middle ground along the lines of Chayan’s Regional Center for Social Science and Sustainable Development (RCSD) for the highlands of Myanmar.

Overall, these essays are largely productive in looking at the history and potentiality of engaged scholarship on (for the most part) ethnic minority issues in mainland Southeast Asia, a note driven home by Michael Herzfeld’s excellently-written conclusion. Some essays (Evrard, Tanabe, Saelmink) are useful additions to the scholarly field in their own right. Others (Sciortino, Sadan) are interesting insights into the deeply hierarchical nature of national and international interventions, and some (Joll, Keyes, Bowie) reflect implicitly or directly upon Achan Chayan’s own profound impact on scholarship in Southeast Asia. In addition to the topical focus of each chapter, the book will be of use to those studying activism, development, or fieldwork ethics in the region and beyond.