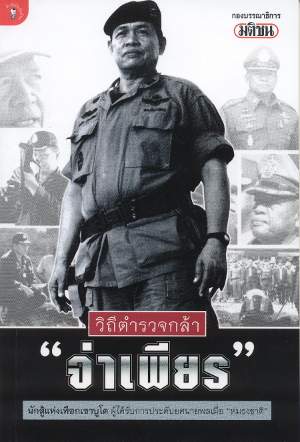 On 12 March 2010 Police Colonel Somphian Eksomya, chief superintendant in Banang Sata District, Yala, was killed in an ambush while returning with his team from a religious ceremony. He was posthumously promoted to police general, but locally he had always been known simply as ‘Sarge’ Phian, whatever his rank happened to be at the time. The driver of the vehicle, Police Senior Sergeant Major Sophon Intharaboworn, a native of Banang Sata who spoke Yawi, died later of his injuries. Two other officers in the vehicle were badly injured but survived.

What made Sgt. Phian’s death particularly poignant was that in preparation for his retirement he had applied for a transfer to Kantang District, Trang. His request had been denied, and he remained in Yala where he met his fate. The Red Shirt protests were just beginning in Bangkok, and during the Phanfa Bridge stage of the campaign near Democracy Monument, Sgt. Phian’s name was heard frequently as the Red speakers criticised the government for its unsympathetic treatment of his transfer application.

Sgt. Phian was the fourth child of ten siblings born into a poor family of rubber tappers in Thepha District, Songkhla. His father was of Chinese heritage in the Jeng clan, his mother was Thai. When Sgt. Phian decided to go to the police school he took a Thai surname, Somya, because Chinese clan names were then unacceptable. Two of his brothers also joined the police force. Sgt. Phian wife, Phimchana, is the daughter of a policeman, and the youngest of their four sons is a policeman. Policing ran in the family, and not without reason. Thailand can be a violent and scary place, and it helps to have a policeman or two around. One of Sgt. Phian’s policeman-brothers took a Thai surname, shared with other siblings, that literally means, ‘very good at protecting the family’. But having a police officer in the family, especially one with a reputation, could be unsafe. Sgt. Phian told his siblings they might put themselves in danger if they greeted him in public.

Almost all of Sgt. Phian’s postings were in the deep south – Yala, Patani, Songkhla, Satun – along with tours of duty in Ranong and Pattalung and a two-year stint in the immigration service. An athletic man in his youth, he loved nothing more than to go on patrol into the jungles and mountainous terrain along the Thai-Malaysian border, camping overnight if the mission required it. He was an excellent marksman and once, while on patrol in the mountains, brought down three branches of sator for the evening meal with three well-aimed shots. Hailed as ‘the fighter on Budo Range’ by one of his superior officers, he was highly decorated, receiving numerous commendations and awards from the Ministry of Interior and the Army Veterans Association. He was very proud of the Rammala Medal for bravery he received from King Bhumphol in 1982 and enjoyed telling the story of borrowing a white uniform and riding to the grand palace in a tuk tuk for the ceremony. In 1983 he was exempted from examination as a commissioned officer, one of the few to be granted that privilege. In 2008 he was named Model Policeman of the Year as well as Superior Officer. He was wounded seriously at least eight times, and limped as a result of his injuries. A gunshot had shattered the bone in his left leg and almost disabled him, and doctors had to insert a metal pin to save the leg. Thus he was also known as ‘Iron Leg’ Phian.

The Matichon book is full of pathos and reads like a pop novella with brutality on one page, tenderness on the next, and the occasional humorous episode to lighten the story, such as the time when Sgt. Phian fell off the track into a jungle ravine and had to be rescued by his fellow officers. The dialogue sometimes sounds a little too genteel for conversation among police officers, and when we are told Sgt. Phian’s subordinates enjoyed drinking, we are left to wonder if Sgt. Phian did not join in with them. In the manner of cremation volumes, which treat their subjects with dignity and respect, Thai biographers pay generous tribute but say little that would detract from a person’s reputation. Authors are mindful of surviving family members who would be hurt or offended by candid comment.

While the Matichon volume, based on interviews with family members and fellow police officers, generally fits this genre, the account manages to disclose details about Sgt. ‘Phian’s personality and career that indicate why he might have been an insurgent target. He was a professional man of action, totally dedicated to his job and unafraid of a fight. He told his men that it was either shoot to kill or be shot. When he became chief of Banang Sata in 2007, one of the station’s officers received a call to warn that Sgt. Phian was a marked man with a price on his head (kha hua). ‘If someone wants to claim the price on my head, bring it on!’ replied Sgt. Phian with bravado when he heard this news. After the fatal ambush in March this year, a rumour circulated that forty goats had been killed in the district to celebrate his death.

In June 2008, Sgt. Phian was part of a massive police-military-border patrol police operation involving armoured vehicles and helicopters to avenge the death of Police Sub-Lieutenant Kruitikun Bunlue, nicknamed Muat Ti, who had been killed in the line of duty at the age of twenty-four. The ensuing clash resulted in the deaths of six insurgents. Thailand’s assistant police chief along with senior regional officers visited the battle scene and handed Sgt. Phian an envelope presumed to be a cash reward for his leadership of the operation. He later distributed the payment to members of his team.

The Matichon book focuses on Sgt. Phian and does not explore the identities of the insurgents or the nature of the grievances that led to these killings. The Thai term I have translated as insurgent (jon korkanrai), which might be rendered as ‘terrorist’, echoes earlier struggles in the Thai south: jon used to mean thief or highway bandit; phukorkanrai was a term used by the Thai government for communist insurgents. Much of the security vocabulary in use today is leftover from the 1960s and 1970s. Local mosques are everywhere in the story, but Islam is barely mentioned, and the Malay-Muslim world of the deep south does not really feature. When Sgt. Phian took up his first posting in Banang Sata in 1970 he was fighting communists and separatists. He spent the last three years of his career back in Banang Sata, but it’s not clear from this book with whom he was fighting.

In asking for redress of his grievances, Sgt. Phian wanted to personally deliver his letter to the prime minister at government house and turned up on 23 February 2010 in full dress uniform with Phimchana, his wife. At first the media scrum paid little attention to what was happening, because many other disappointed officers were also fronting up to complain about the decisions on their transfer applications. But armed with copies of his service record and the letter tearfully supplied by ‘Iron Leg’ Phian, the famous ‘fighter of the Budo Range,’ the journalists realised they had a big story. In his letter he wrote with passion about the sacrifices he had made in trying to keep the peace in the south, and he criticised the patronage system and political interference in promotions and transfers. He was bitter about being the victim of political games during his career, and he scolded the senior command for basing its decisions on patronage rather than performance, thus setting a bad example for younger officers. He pleaded for more attention to the problems of officers working in the southern danger zones. Chapter 15 of the Matichon book contains a list of twelve proposals to reform the remuneration and disability benefits of police officers in the deep south.

Sgt. Phian would have known that Kantang was a plum posting, ‘a goldmine’ by one account, and much sought after because of the vice and commerce in the busy port. He was among several officers nearing retirement who had competed for Kantang, and at least one of them had more connections and may have been able to offer more inducements than Sgt. Phian could muster. In his letter of appeal Sgt. Phian declared that he deserved the transfer because of his record, but a lifetime of exemplary policing was not enough to secure the post he coveted. The account of his wandering around the provincial police headquarters in Bangkok with his small entourage looking for the appropriate office to lodge his appeal suggests that he was a country boy who didn’t know how to play politics in the upper echelons of the police command.

The conventional wisdom is that Thai police are corrupt and comically inept, but owing to the importance of the police force in modern Thai history, the topic deserves more than what this lazy generalisation conveys. Duncan McCargo in his award-winning study, Tearing Apart the Land: Islam and Legitimacy in Southern Thailand (2008), comments on the nak leng types as well as the dedicated officers who are drawn to this work but makes clear that his source material was limited. The history of the Thai police is not well studied in academic work, although the situation may be changing. In Copenhagen S├╕ren Ivarrson has begun a major research project on the role of the provincial police and their Danish officers in the formation of the modern Thai state. Eric Haanstad’s 2008 doctoral thesis in anthropology at the University of Wisconsin-Madison contains a brief history of the Thai police. Samson Lim is completing his doctoral thesis at Cornell on ‘The Police, the Press, and the Crime Story in Modern Siam, 1890s – 1960s’, and a young Thai historian at Chulalongkorn University, Nonthaphorn Yumangmi, is writing his doctoral thesis on the municipal police in Bangkok from 1875 to 1915.

But apart from a few scattered articles and book chapters, there is little else to read on the police force – its history, its recruitment, its training, its ethos and its complex culture – even in Thai, which is odd when you think about how the police form such a crucial link between the government and the citizenry.