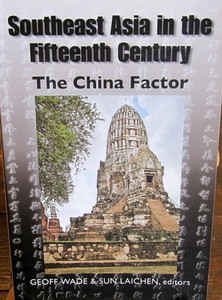 Recent years have seen a concerted effort to examine the history of Southeast Asia through the adoption of approaches that originated in the field of world or global history. The most important rationales for the development of such scholarship are two. One lies in the recognition that trans-regional systems operated, particularly in Asia, well before the advent of European ascendancy and hegemony in the modern era led to the development of “modern” world systems. The second is rooted in the argument that the linked-ness of Asia meant that developments in one part of Asia had ramifications in other parts of Asia, in a series of domino-like reverberations across intervening spaces and societies.

The volume under review is part of this academic current. It is an ambitious project, one that attempts to explore and encapsulate the role of Ming China as a factor in spurring significant developments–in particular state formation and statecraft–in Southeast Asia during the fifteenth century. It collects research from a number of heavy-weights in the field of Southeast Asian studies, including Anthony Reid, Pierre-Yves Manguin, the late Roxanna Brown and John Miksic, as well as from such other well established scholars as Michael Vickery, John Whitmore, Momoki Shiro and Li Tana. The chapters cover a large number of fields, including literary studies, political history, historiography, international relations, maritime history, art history and archaeology.

In addition to the obvious geographical distinctions inherent in these sections, another distinction among them relates to the types of sources utilized in their constituent chapters. Whereas there is a total reliance on Asian textual sources for the chapters on Mainland Southeast Asia, archaeological data and non-Asian textual sources form the primary basis on which those treating Maritime Southeast Asia are written.Several notable assumptions underpin this volume’s overall thrust. First, the fifteenth century was characterized by what Anthony Reid has termed “the age of commerce” in Southeast Asia. The role of commerce and economic interaction–within Southeast Asian polities, across the region, and with China–is credited in the book as a leading determinant factor of developments in Southeast Asia during the period in question. Second, this period preceded the phase of political consolidation in Mainland Southeast Asia during the eighteenth century for which Victor Lieberman argues. The fifteenth century, as it appears in the Wade and Sun volume, was thus characterized by the emergence of a large number of polities and by a highly fluid, even amorphous, state of political affairs that allowed external influences to have a significance in political developments that would have been impossible in the context of large, stable states.

These assumptions frame the role of Ming China in fifteenth-century Southeast Asia as it is discussed in the volume. China’s civilizational weight inevitably led to its influence, both actively and unconsciously exerted, on the polities and societies of neighboring regions. Southeast Asia’s geographical proximity to China made this influence particularly substantive in that region. Also, the Yongle voyages of the early fifteenth century gave initial impetus to China’s influence on Southeast Asia. They were followed by less visibly manifest, but nonetheless substantive, Chinese involvement in the region in the form of economic demands, cultural assimilation and political interference. The result, as amply demonstrated in the contributions to this volume, was an inseparable linkage between, on the one hand, economic interactions between a tier one economy, China, and its economic periphery in Southeast Asia and, on the other, state, social and material-cultural formation in the East Asian periphery. In demonstrating and examining that linkage, the volume makes an important contribution to the study of Southeast Asia. It showcases the power not only of the integrative use of Southeast Asian and Chinese sources but also of the use of trans-regional lenses for the examination of Southeast Asian history.

Nonetheless, several problematic issues do stand out. First, not all of the papers are equally well yoked to the volume’s aims. Christian Daniels’s paper on the transfer of agricultural technology, for example, does not demonstrate satisfactorily the role of China in the rise of states as exerted through the adoption of Chinese agricultural techniques. While it offers significant information on the differences in the techniques of rice cultivation, and the nature of such cultivation practices on the Southeast Asian mainland during the eighteenth and nineteenth centuries, it does not clearly show the means by which this knowledge was transferred from China to Mainland Southeast Asia during the fifteenth century. Similarly, while Pierre-Yves Manguin’s paper amply demonstrates that the fifteenth century was an important starting point in the evolution of Southeast Asian ship-building technology through the amalgamation of both Southeast Asian and Chinese techniques, the role of China or Chinese people and the motivations for technological assimilation by Chinese and Southeast Asians remain unexplored. In addition, Alexander Ong Eng Ann’s brief paper does not do sufficient justice to the important topic of the impact of Ming China on the creation of social memories in Mainland Southeast Asian polities and societies.

Secondly, China’s proximity to Mainland Southeast Asia makes it fair to expect the existence of geo-political currents operating across the borders between China and the societies and polities of Mainland Southeast Asia. This would have been the case particularly in the fifteenth century, when China under the Ming dynasty was on an upward ascendancy. However, the overall impression gleaned from Southeast Asia in the Fifteenth Century is that Ming China’s impact on Southeast Asian developments was more along the lines of incidental effects of Chinese policies, policies otherwise aimed at the Chinese domestic arena, than the result of active Chinese foreign-policy initiatives directed at neighboring reaches of Southeast Asia. While the social impact of the Yongle voyages is discussed to some extent in the section on Maritime Southeast Asia, the extent to which these voyages affected the nature of state formation and geo-politics in the maritime region is not treated. Conversely, the implications of the tusi system, which is fundamental to our understanding of China’s dealings along its borderlands during the Ming period, is, with the exception of Sun Laichen’s introductory essay, hardly discussed in any of the volume’s chapters as a possible factor in or impetus for state formation in the highland regions of Mainland Southeast Asia. The historical importance of China’s recognition of a Southeast Asian polity as a source of political legitimacy in the region itself makes it puzzling that the role of Ming foreign policy, including the operation of the tribute system that the Ming court devised, is barely engaged in this volume

Derek Heng teaches in the Department of History of the Ohio State University. He is the author of Sino-Malay Trade and Diplomacy in the Tenth to Fourteenth Centuries (Ohio University Press, 2009) and co-author, with Kwa Chong Guan and Tan Tai Yong, of Singapore: A Seven-Hundred Year History (National Archives of Singapore, 2009).