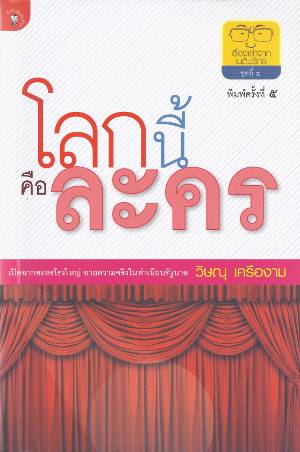 I once heard a political scientist dismiss a question about the Thai bureaucracy with disdain. He said the bureaucracy was like jelly, impossible to grasp. Dr Wissanu Krea-ngam, who was Secretary-General of the Cabinet (S-GC) from 1993 to 2006, has given a face, personality, and purpose to Thai bureaucracy in this memoir of his work under seven prime ministers and ten governments. The position entailed being a government “legal eagle,” neti borikon or “lawyer-in-service to power.” The office had been recently unstable, with four S-GCs in 3.5 years (early 1990 – Oct. 1993), but Dr Wissanu improved the statistic, as did two of his predecessors who served for a decade (1959-1969, 1974-1985). Long incumbency of these officials provides bureaucratic continuity through the frequent turnover of coalition and military-appointed governments.

Along with his good friend Dr Bowonsak Uwanno, who served as Secretary to the Prime Minister from 2003 to 2006, Dr Wissanu is a southerner from Songkhla. Born in 1954, he was encouraged by his mother to plan a teaching career. By his mid-twenties he had earned a doctorate in juridical science from the University of California-Berkeley, and at thirty-two he had become a law professor at Chulalongkorn University. When he takes office on 1 October 1993 at the age of forty-two, he pauses to marvel at his rapid rise through the ranks. He thinks about the eighteen years remaining before his mandatory retirement and reflects on the quirks of fate that have opened up the vacancy for him.

Dr Wissanu knows that bureaucratic tenure is precarious. Top officials serve at the pleasure of the government of the day, and dismissal or retirement of one person can set off a chain reaction of appointments. When a new government comes to power the incoming cabinet members are instinctively suspicious of the legal eagle who has been helping their predecessors perform while they have been stuck in opposition. In the hectic month between a national election and investiture of the new government by the king, the S-GC strives to demonstrate his loyalty. Dr Wissanu must draw up the list of prospective ministers and prepare assessments of their credentials. Rumour is the order of the day as the media clamour for hints of who will get what portfolio. More than once Dr Wissanu is certain he will be sacked, only to find he has been re-appointed.

The S-GC needs to be close to the politicians, but not too close. He needs to keep his distance, but not so far away that his loyalty is questioned. He is supposed to be politically unaligned, but the nature of the work can turn him into a functionary of the government, and when that happens, his position is compromised. Time and again Dr Wissanu denies media reports that he is affiliated with this faction or that powerful person. He strenuously objects that he gave legal advice to the 1991 coup group. He is not fond of military rule. 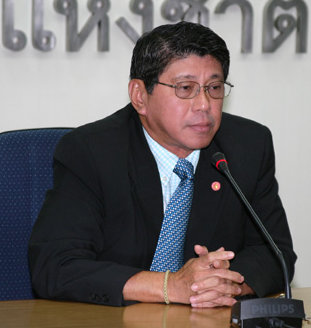 Dr Wissanu is optimistic by nature. When his situation begins to deteriorate, he tells himself that what appears to be the end may be just the beginning. Every crisis conceals opportunities. Just after his birth, his mother consults an astrologer, who foretells that her son is destined to survive the crises in life and work that lie ahead. When Wissanu makes merit, he prays that he will encounter only people of right and proper views. If misfortune or danger is headed his way, may he escape before it is too late! He has many lucky escapes.

When he leaves the university to join the public service in late 1990, he finds he has a boss and must work to instruction. He understudies his part with Yongyut Sarasombat, a policeman trained as a dentist who once pulled out one of Mr Thaksin’s teeth. Yongyut, the fifteenth S-GC summarily removed from office by the 1991 coup group, tells Wissanu to think of his new world as the theatre. The Thai shorthand for S-GC spells lakhon, play or drama. This word-play gives the book its nuance. Sometimes Dr Wissanu is acting inside the play, sometimes he stands outside and watches it.

He examines the record of his seventeen predecessors since the end of the absolute monarchy, and he seeks out advice from experienced officials. He learns to educate the cabinet ministers in the responsibilities and protocols required of them. He applies balms and salves to calm their anxieties. He has to fix little problems before they become big problems. He advises the politicians on legislation, bearing in mind the constraints of precedent. If something they want to do cannot be done, he must come up with alternative solutions. Delay is an acceptable means to an end. At times of impending crisis, such as the dissolution of parliament, which happens often, it is imperative that he type his own correspondence lest sensitive information should fall into the wrong hands.

He imbibes the wisdom of his mentors and imparts his own. He teaches his staff to play SAFE, his motto for responsible performance of duties – Secrecy, Accuracy, Fastness, Efficiency. He is aware of another meaning of “playing it safe,” the bureaucrat’s survival tactic. Professionalism, the fatefulness of timing, damage control, the need to consult and build consensus, and the lessons of history are themes that preoccupy him in this manual for the aspiring bureaucrat.

At a farewell party after the Democrats lost government in July 2011, the incumbent S-GC, Dr Amphon Kitti-amphon, who was re-appointed by the Thaksinite government of Yingluck Shinawatra, presented the defeated Abbhisit Vejjiva with a copy of Dr Wissanu’s book along with an Oscar to honour the former prime minister’s starring role from 2008-2011. This World’s a Stage comes from a popular Thai song from the late 1950s with bitter-sweet lyrics about life’s dramas [Suthep Wongkhamheng sings it here]. The book’s title also echoes passages in Shakespeare, including a speech from As You Like It quoted by the author:

All the world’s a stage, and all the men and women merely players;

They have their exits and their entrances, and one man in his time plays many parts.

Dr Wissanu has played his part and exits in the fourth week of June 2006, devoting the last chapter of the book to his final months as a state official. Some operational details of network monarchy that critics of the paradigm have been calling for are disclosed here. Its tendrils undergo a growth spurt in the first half of 2006 as the political situation deteriorates at the same time as the country prepares to celebrate King Bhumibol’s sixtieth year on the throne on 9 June. News of the imminent release of Paul Handley‘s biography of the king bursts in the brain of the power elite, and Dr. Bowonsak is dispatched to America in an unsuccessful attempt to negotiate withdrawal of the Yale University publication. Nothing is working well, governing has become impossible. Dr Wissanu communicates with the prime minister by confiding in Pojaman, Thaksin’s wife, and her brother, Banphot. She listens attentively to his frustrations and counsels patience, but he has made up his mind.

After fifteen years in government house, including four years as one of Thaksin’s deputy prime ministers, he resigns, and the prime minister summons him for a final chat. In a long passage that surely benefits from hindsight, Dr Wissanu warns Thaksin of the perils that may lie ahead, encoding his advice in a book recommendation. “Mr Prime Minister, I’m sure you have read many more books than I have,” he tells Thaksin, “but I hear you read mostly foreign books. You need to read more Thai history, especially Analysis and Assessments of Sixteen Thai Prime Ministers by Bunchana Atthakon about the strengths and weaknesses of these leaders. Learn from their strengths and develop them for yourself. Mr Bunchana suggests that stability stems from support from the people, the army, and the monarchy.” But Thaksin is convinced he will not, indeed cannot, be displaced. “I’ve plugged all the holes,” he tells Wissanu. “The police, the army, the civil service, the permanent secretaries, the department heads – they’re all with me. There is nothing to fear – fear only worsens the situation.” Thaksin is testy when the media question him later about Wissanu’s resignation, saying that if the man wants to leave, he can leave now. “It had come to that!” muses Wissanu. He has stipulated 24 June as his last day, a date that marks a turning point in Thai history, the 1932 coup. His critics accuse him of abandoning the government and hastening Thaksin’s downfall, another turning point.

This book, the first of three, is followed by Telling Tales of Leaders containing sketches of the political and economic crises that beset the seven men he worked for. One of his prime ministers is na├пve in interpreting what the king says in a royal audience, another is indecisive and aloof, but discretion is the fraternal twin of secrecy, and the anecdotes fall well short of besmirching the reputations of the high and mighty. Dr Wissanu is a pro and knows how to play safe, yet his writing is unusual in the genre of Thai memoirs for its personal reflections and frankness. He is definitely Oscar material.