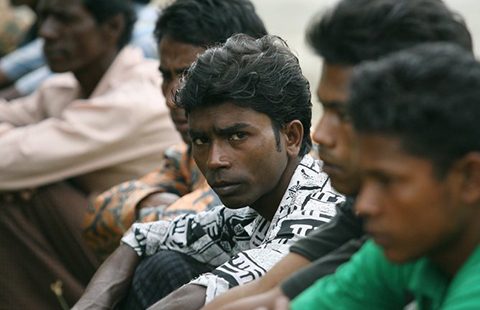 The abusers of institutionalised children in Australia during the 1960s could not have imagined a Royal Commission investigating their evil deeds half a century later.

But in 2016 those responsible for keeping asylum seekers away from our shores should be aware — and perhaps fearful — that in some more caring and concerned future they may be called to account for harm done through their actions.

Eye witnesses at this imagined inquiry will be hard to find, for few independent observers have made it to the detention centres. Those who have worked in the camps will need immunity before giving evidence; the Australian Border Force Act prohibits government employees and contractors revealing what’s going on.

Dr Antje Missbach suffers none of these restraints because she’s been looking at the issue from Indonesia, the point of departure for more than 25,000 asylum seekers since 2012.

The Monash University anthropologist has spent four years researching the tragedy of what she calls ‘transit migrants’ – the Afghans, Iraqis, Iranians, Burmese, Sri Lankans and now Somalis who expect to use Indonesia as a brief staging post on their way to Australia.

But in 2013 the Australian Government’s Operation Sovereign Borders started pushing asylum-seeker boats back to Indonesia. Another policy makes those registered in Jakarta with the UN High Commissioner for Refugees after 1 July 2014 ineligible for resettlement in Australia.

According to the Australian Government the tactics have worked and no boats have made it to the mainland.

This has left more than 13,500 people in limbo, and the number is increasing. They can’t work and the kids don’t get schooling. The Indonesian government has shelter for one in 10, the rest fend for themselves, their presence often causing conflict with locals. Although many are Muslim, those from Iraq and Iran tend to be Shia, while Indonesia is overwhelmingly Sunni.

In 2013 a brawl left eight detainees dead. “Tension and deep animosity had been building in the centre (in Sumatra) between the Burmese Muslims and Buddhists, yet no precautions had been taken to prevent violence,” reports Missbach. Australia helps fund the centres.

Australia sees the transit migrants’ plight as Indonesia’s problem caused by lax border controls allowing easy entry to the Republic, with corrupt officials assisting their movements through the archipelago and onto boats heading south.

Indonesia reckons this is Australia’s problem because that’s where the asylum seekers were heading. And so there is impasse.

Missbach’s book has been published in Singapore as Troubled Transit by the ISEAS-Yusof Ishak Institute. Other scholarly investigations of immigrant movements have focussed on Europe and North America.

This appears to be the first in-depth examination of how and why the asylum seekers get to Indonesia, what pushes and pulls them, how they are faring and what happens next.

On the latter is would appear not much — although there’s been loose talk in Jakarta about setting aside an island. There’s no apparent urgency, though that could change in a flash if more serious conflict erupts between reluctant guests and hostile hosts.

Just before the Christmas break Australia hosted the so-called ‘2 + 2 Dialogue’ of Indonesian and Australian foreign and defence ministers. The bland 33-point communiqué was a text-book of diplomatic clichés — “welcoming”, “noting” and “underlining” but no mention of the stranded asylum seekers.

The nearest was a reference to a meeting of the Bali Process on People Smuggling, Trafficking in Persons and Related Transnational Crime, scheduled for March.

Although Indonesia has long promised to sign the Refugee Convention this hasn’t happened. Missbach believes the chance of ratification under President Joko Widodo “remains minimal”.

Jakarta fears acceptance could lead to the establishment of a domestic asylum system. Missbach comments: ‘Australia could then designate Indonesia as a safe first country and return people there, which Indonesia wants to avoid more than anything else.’

Troubled Transit is a professional report thankfully devoid of the usual polysyllabic jargon some academics seem to think necessary to distinguish their work from journalism.

The only impediments to smooth reading are in-text references. These are like speed bumps and should not be used by publishers seeking wider readership.

Missbach’s poignant stories of individuals remind that behind the acronyms and initialisms are despairing human beings caught in a Kafkaesque nightmare.

Recounting the personal without losing her objectivity must have been tough. Three boys she knew drowned trying to reach Australia. Some authorities thought her a spy. Why would a German researcher working with an Australian university be in Indonesia?

Despite the suspicions she got to state officials, jailed people smugglers and even into detention centres– impossible in Nauru or Manus Island.

Missbach interviewed those who’d learned some English or Indonesian to by-pass interpreters and so avoid risking her informants’ privacy. Many were “severely distressed or traumatised”.

Breaks in Germany and Australia became essential “to distance myself from the field and its psychological burdens.”

This book is more than a primer for appreciating the issues. It could also be Exhibit A when the Royal Commission into harm done by asylum seeker policies is eventually appointed.