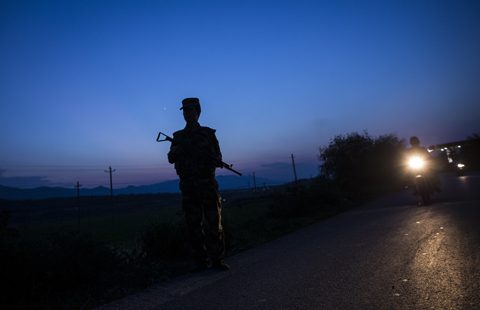 A Chinese soldier patrols the border with Myanmar. Photo by AFP.

Myanmar’s rapid opening to the rest of the world is having widespread implications for the Southeast Asian nation.

And on the China-Myanmar border this is leading to the exchange of all types of goods and services – including people.

Reporting for the ANU College of Asia and the Pacific from the town of Muse in Shan State, Olivia Cable writes Muse’s streets throng with shops full of cheap Chinese manufactured wares.

“With its hustlers and hawkers, its street-stalls, food-carts, red-light district and thriving black markets, Muse seems almost to crackle and pop with economic activity.”

But as Cable points out it’s not all one-way traffic; and local people from Muse are slipping through gaps in the border to seek their fortunes in China.

“Two women, both under the age of 30, wait eagerly for their moment to cross. They seem well practiced, and they know what to look out for. Two Chinese patrols pass–one armed and quite serious-looking, another seemingly less concerned with border-control than upholding its impressive fitness regime.

“The two women run for the fence, scampering through the hole and making a B-line for the motorcycles that await on the other side. Cargo on board, the drivers rev their two-stroke engines, kick up a small cloud of dust and disappear noisily along the street.”

Read the full article on human trafficking at the ANU College of Asia and the Pacific.