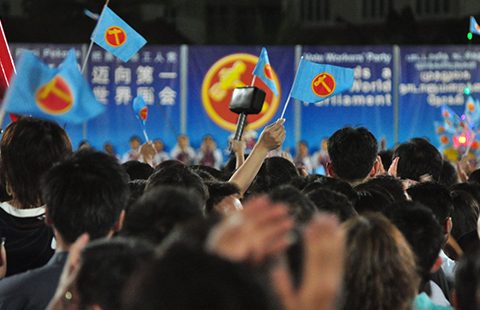 Always the ballot bridesmaid: supporters of Singapore’s Workers’ Party at a rally. Photo by Abdul Rahman on flickr https://www.flickr.com/photos/wp-2011-rallies/

The countdown to Singapore’s highly anticipated general elections has well and truly started.

Speculation has been rife over recent weeks about the exact timing of the next vote since Prime Minister Lee Hsien Loong revealed in Parliament on 13 July that he had convened the Electoral Boundaries Review Committee (EBRC) two months ago.

The EBRC, which released its report on 24 July, is responsible for delineating the exact boundaries of individual electoral constituencies, and is typically convened a few months before elections take place. Parliament is normally dissolved between a day and two months after the EBRC releases its report.

Parliament is yet to be dissolved and the Prime Minister may be pulling a fast one on the entire country. Yet, there are several reasons to expect elections to be called within the next few months, rather than closer towards the mandated deadline of January 2017.

First, and most obviously, the ruling People’s Action Party (PAP) is seeking to leverage on the “feel-good” factor of celebrating the city-state’s 50th anniversary of independence. Celebratory “SG50 funpacks” containing commemorative items, snacks, and nostalgia-themed games are currently being distributed to some 1.25 million households across the country.

PAP Members of Parliament are taking the opportunity to meet with residents during the funpack distribution process. The country has also been inundated with SG50 commemorative events and decorations in the lead up to the National Day celebrations on 9 August. In reminding the population of its achievements in governing the improbable island-nation for the past 50 years, the PAP will seek a mandate towards SG100.

Second, the PAP has implemented significant reforms to address various public-policy problems that dragged the ruling party to its worst-ever electoral performance in 2011.[1] The government’s allocation of $8 billion through the so-called “Pioneer Generation Package” has substantively reduced healthcare costs for the elderly. Housing prices have stabilised and moderated somewhat after the government introduced tough new measures aimed at deflating a housing bubble.

Furthermore, the massive inflow of foreign workers into the country over the past decade has slowed to a trickle, assuaging Singaporeans’ concerns about the tiny island-city’s rising income inequality and eroding national identity.

The only open sore that has resisted healing thus far is the perceived inadequacy of Singapore’s public transport network. For instance, despite significant state investments to expand the subway system’s capacity and improve reliability, periodic breakdowns–such as the 7 July disruption that marked the worst in network’s history–continue to frustrate commuters.

Now that the physical battle lines are drawn, we can expect some heated battles. One should look out for strong contests in the newly created Single Member Constituencies (SMCs), as well as a few of the Group-Representative Constituencies (GRCs).[2]

The newly created Fengshan SMC and East Coast GRC are likely to be key battlegrounds. Fengshan SMC is carved out of East Coast GRC, which saw the opposition Workers’ Party (WP) secure 45.2 per cent of the votes in 2011 – one of its strongest performances.

The creation of Fengshan would likely help the PAP cut its losses in Singapore’s east, where the WP has steadily gained ground in recent elections. By sacrificing Fengshan to the opposition, the PAP can consolidate its vote share in the rest of East Coast. It will be interesting to see who the PAP will field in Fengshan to face a likely WP challenger, and whether the WP can gain ground in the rest of East Coast.

Two other SMCs that are likely to host heated contests are the newly created MacPherson SMC and Mountbatten SMC. MacPherson SMC is carved out of the PAP-held Marine Parade GRC. The ward has been served by Ms Tin Pei Ling, who had–as the youngest PAP candidate in 2011–attracted considerable controversy among voters who panned her perceived inexperience.

If she stands for election again in MacPherson, opposition political parties may regard her as a weak opponent and try to pry the seat away from the ruling party.

As for Mountbatten, the Singapore People’s Party’s (SPP) Jeanette Chong-Aruldoss is gearing up to contest the constituency for the second time. In the previous election, she campaigned under the banner of the National Solidarity Party (NSP), coming second with 41.4 per cent of the vote, and was subsequently elected to Secretary-General of NSP in 2013.

Unfortunately, she resigned from the NSP due to differences with the rest of the party, and has since joined the SPP, led by long-time opposition stalwart Chiam See Tong.

Of course, all eyes will also be on WP-held Aljunied GRC, the first GRC to fall to the opposition since such multi-seat constituencies were introduced in 1988. The PAP candidates – Victor Lye, Chan Hui Yuh, Kahar Hassan, K Muralidharan Pillai, and Chua Eng Leong – have been working the ground for some time to try to wrestle the GRC back.

If they are successful, it will be a spectacular coup because it would eliminate the entire WP leadership from Parliament (should the WP field the same slate in the district). The WP will fight hard to preserve such a prized conquest.

But we should not miss the forest for the trees, with several broad themes likely to influence the nation’s upcoming vote. In particular, two key issues stand out – opposition coordination, and ruling party renewal.

Many observers worried that the PAP could benefit from a three-way split in the pro-opposition vote, though a majority of voters ultimately backed the WP candidate.

Nevertheless, there are some worries as to whether the opposition parties will be able to get their act together. Since 2011, Singapore has seen the emergence of new opposition parties and a revival of some old ones. Tan Jee Say, a former presidential candidate in 2011, and a former principal private secretary to former Prime Minister Goh Chok Tong, founded the new Singaporeans First party.

Opposition veteran Goh Meng Seng recently registered the new People’s Power Party, which is also likely to contest. Benjamin Pwee, formerly a candidate in 2011 with the Singapore People’s Party, has also taken steps in the past few years to revive the long-dormant Democratic Progressive Party. For its part, the PAP will likely unveil new candidates to replace retiring Members of Parliament.

Historical trends suggest that we can expect more former military generals, ex-civil servants, and more rhetoric about the “next generation of leadership.” But because the PAP remains dominant and can be virtually assured of overall electoral victory, the party is also in a strong position to introduce more radical and critical voices to credibly signal its reformist credentials to voters.[4]

This would allow it to counter any opposition criticism that could characterise the PAP as paying lip service to reforms and making only token changes.

The PAP could do so by co-opting some of its toughest critics. One of them is Catherine Lim, a renown author and long-time PAP critic who recently made a surprise announcement about ending her role as a political commentator, while being vague about what her future plans were. Another possibility is the stand-up comedian Kumar, who made an open invitation to the PAP to recruit him in a recent interview.

Can the PAP break its stale mould of technocratic governance and pull a rabbit out of the hat? One can only hope.

Elvin Ong is a PhD student in the Department of Political Science at Emory University. His article ‘Complementary Institutions in Authoritarian Regimes: The Everyday Politics of Constituency Service in Singapore’ is forthcoming in the Journal of East Asian Studies. He can be reached at [email protected].

[4] On the prospects of reform in Singapore and Malaysia, see Slater, Dan. 2012. “Strong State Democratization in Malaysia and Singapore.” Journal of Democracy. 23(2): 19-33.