The “hair bridges” story about women in Sagaing Division selling their hair to raise money to rebuild bridges reminded me of another article published in The Myanmar Times, by journalist Cherry Thein.

The bridges the women are hoping to rebuild are on a section of the road between the Sagaing Division capital Monywa and Alaungdaw Kathapa National Park, the country’s oldest and largest national park and also an ASEAN heritage site. The park is home to some rare animal species — mammals, birds and butterflies — and it’s also a major Buddhist pilgrimage site thanks to an ancient pagoda.

This pagoda has a sealed cave; inside is said to be the body of the Guatama Buddha’s younger brother, Ashin Maha Kathapa, who helped to convene the First Buddhist Synod at the Satta Panni cave in India. (Other reports say Maha Kathapa was from the 13th century.) 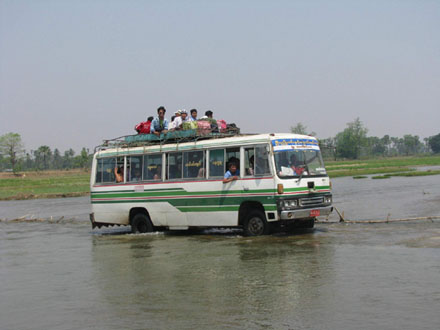 The article, from late last year, discussed the difficulties locals have in keeping this particular stretch of road open. You can see from the picture the conditions pilgrims face when visiting Alaungdaw Kathapa — this photo was taken by the same journalist and was published with the story. I saved it at the time but can’t find the internet link anymore — I believe it was issue #439 if anyone can help with that.

The long road to Alaungdaw Kathapa from Monywa can be rigorous, its difficulty an attraction for devotees who feel that the harder and riskier the trip, the more worthy the pilgrimage.

The Venerable Thu Manna, 72, who has been serving as overseer of the cave pagoda for more than 10 years, said that together the two festivals now attract more than 200,000 pilgrims a year.

“When I first came here it was much harder to get to the pagoda. There were no rest houses, no roads, not even a pathway to get down the cliff where the pagoda is located,” he said.

“Now we have improved access to the park for pilgrims and there are 40 rest houses, as well as three monasteries where monks can stay and take care of the pagoda during the off-season,” said U Tun Shwe, 69, a member of the pagoda’s board of the trustees.

There is even a steep, zigzagging stairway down the cliff to the cave.

“It was very hard for us in the early years to arrange the festivals. We had to celebrate the opening ceremonies with only a few monks. I can even remember collecting leaves to use as plates to offer alms food to the monks,” U Tun Shwe said.

He said road repairs and rest house construction in Alaungdaw Kathapa National Park were carried out by foresters employed by the Ministry of Forestry, with help from monks staying in the park.

“We have to repair the roads leading to the park every year starting in October because there are so many landslides during rainy season and we have to clear the way again,” he said. “It’s very dangerous to work in the forest, and elephants are very useful in helping us get our jobs done.”

Apparently a trip to Alaungdaw Kathapa means a mandatory elephant ride through some of the roughest sections, where the road literally disappears. While it certainly fits into the “off the beaten track category”, as far as I can tell travellers do not need any special permission from the government to visit Alaungdaw Kathapa.

There are a couple of other interesting sites in the Monywa area, including the Pho Win caves and Thanboddhay Pagoda, but Sagaing Division would have to be one of the least-visited areas in the country.