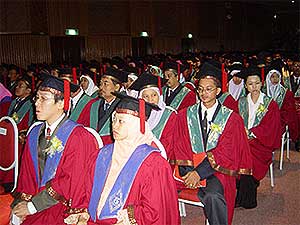 Anil Netto’s blog has the following statistics, gleaned from a parliamentary response provided to PKR Member of Parliament, William Leong in 2009:

This more or less tallied with the 47,733 active graduate registrants on the Malaysian Labour Exchange in June 2008.

By October 2009, we were looking at 81,046 active graduate registrants on the Labour Exchange – and another 70,747 active registrants who are diploma holders.

In 2010, it was reported that 30,000 graduates could not find employment six months after graduation.

Malaysia’s world class education system appears to have produced unemployable graduates with 90% of them bumiputeras.

William Leong also attributes Bumiputera graduate unemployment to mismatch – where public universities are not being in tune with industry needs and/or producing graduates that are not in demand.

Retraining them have produced dismal results but at a tremendous cost. Dr. Lim Teck Ghee of CPI cites that approximately RM500 million a year is spent on retraining these graduates.

It is the fervent hope that these unemployed Bumiputera graduates correctly identify Barisan Nasional’s policies and themselves for their predicament and not innocent bystanders such as the non – Malays.

[Editors note: UMNO and and its new partner PERKASA, have perfected the art of blaming non-Malays, especially the Malaysian Chinese community and sometimes, Western powers for the ills of the Malay community.]

Thousands more Bumiputeras are expected to graduatein the short and medium term. The Malaysian economy is expected to perform at a stable but mediocre 4.6% to 5% over 2011-2020. It is unclear if there will be sufficient number of jobs created for them or if these graduates will be able to compete for the jobs that are available in the private sector.

It is left to be seen how this rising tide of unemployable Bumiputera graduates will affect Barisan Nasional and Malaysia’s future.

[Editor’s note: This is not to suggest that Bumiputera graduates are not competent but merely to highlight that a large majority of them – 90% – have difficulty finding employment.] [Correction (16-02-2012) – the above should read that 90% of those who have voluntarily registered as unemployed in a government database are Bumiputeras]