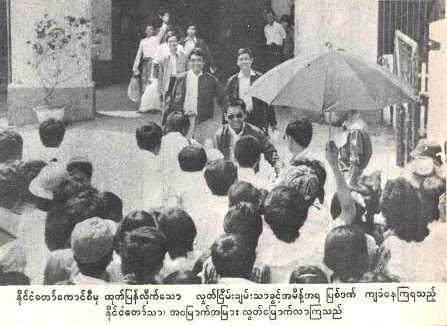 The release of over 6000 prisoners from jails in Burma last week, including over a hundred prisoners of conscience, attracted a lot of news internationally. Many reports gave an impression that the amnesty was an exceptional event. In fact, governments in Burma, or Myanmar, have long issued amnesties, as a variety of publications in the National Library of Australia’s collection reveal. Far from being exceptional, amnesties in Burma are, these documents suggest, increasingly rather like seasons: predictable in their arrival, but less easy to forecast in their specific characteristics.

After independence, the question of who had power to grant an amnesty and whom it could cover was hotly contested. The question came up in the 1952 Burma Law Reports, in the case of Boh Sein Tun. The High Court considered the meaning of an amnesty, following a 1950 ministerial announcement that the government would not prosecute surrendering insurgents. The court agreed that the president had the power to issue general amnesties covering either persons not yet convicted or those already convicted and imprisoned, but that he could do so under the 1947 Constitution only on advice from the government. A ministerial order alone did not constitute an amnesty. Other than going via the president, the government had to legislate if it wanted to make an order binding on the courts.

After the military seized power in 1962, General Ne Win declared a general amnesty. A collection of Ne Win’s speeches contains a homily that he delivered to prisoners upon their release from the central jail on 5 April 1963. This amnesty order, like those before it, was subject to cases in the courts. But the cases did not contest the general’s authority to issue the amnesty, only its scope. In contrast to the ruling in 1952, the court held in the 1964 U Bo Kyi case that the amnesty order was an act of “high policy” that eclipsed law. From this time onwards, the granting of amnesty became an administrative rather than legislative matter.

Successive governments have granted amnesties whenever they have seen fit. In 1980 the Ne Win government issued an amnesty for criminal and political detainees meeting certain criteria, including former armed forces commander and later deputy chairman of the National League for Democracy, Tin Oo. The photograph at the top of this post, from the July 1980 edition of the Party Affairs periodical, shows the release of prisoners on that occasion. 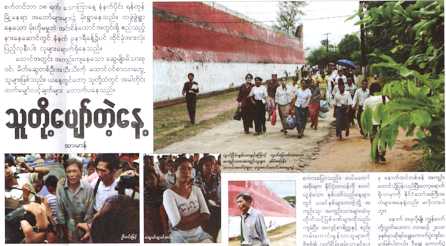 In recent years, amnesties have been issued frequently, and news media wait with excited anticipation for this person or that to walk though the gaol gates. In September 2009 over 7000 walked free, including prisoners of conscience like U Win Myint, a National League for Democracy member shown being interviewed in the photograph under the article headline (“Their happy day”) from 7 Day News, above. According to a speech given by U Zaw Win, Director General of the Correctional Department cited in that article, around 120,000 prisoners had been released under amnesties issued by successive military governments in the two decades since 1989, which comes to around 6000 persons on average per year.