“Burma: Inside the Secret City”

Australian broadcaster SBS has just shown a Dateline report on Burma by journalist Ginny Stein. Following is the promo from the Dateline website. A transcript should be available on the site soon. 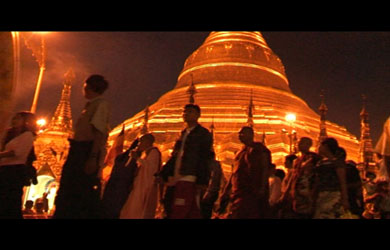 In the past week activists inside Burma, one of the world’s most repressive military dictatorships, have been testing the limits with a campaign of organised dissent. They’ve been holding prayer vigils across the country. While that may sound harmless, this is a country where even joking about the military regime can land you in prison. Burma, renamed as Myanmar by the military regime, is a nation where outside scrutiny is virtually impossible, its citizens generally kept quiet by a climate of fear.

Dateline’s Ginny Stein returned to a country which placed her on its blacklist six years ago armed with a hidden camera. She has returned with exclusive images of the general’s newest project…a brand new capital, which has been off limits to the outside world since construction began. She reports on the reason behind the move and the deadly price many have paid for it.