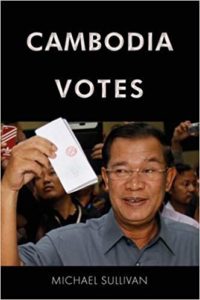 Ahead of a nominal general election scheduled in Cambodia for the end of July 2018, Michael Sullivan, author of Cambodia Votes: Democracy, Authority and International Support for Elections 1993–2013 (NIAS Press, 2016), joins New Books in Southeast Asian Studies to make a case for elections there, however fraught, as a site of authentic struggle. Tracking Cambodian elections from the unprecedented UN-managed election of 1993 up to the present, Sullivan examines the complex relations and agendas that inform and enliven these events: domestic and international, bureaucratic and personal,  technical and political.

Against the idea of Hun Sen as hegemon, Sullivan maintains that electoral cycles in Cambodia reveal just how tenuous the ruling party, and its leader’s, hold on government really is. Even under highly oppressive political conditions they represent, he argues, an opportunity for an “inherent democratic impulse” to be realized. Going beyond particulars, Sullivan also offers Cambodia as an instructive case for international agencies that invest heavily in projects for social and political change which, when they do not turn out as planned, force reappraisals but not withdrawals of funding or support—even in conditions where political opponents of the ruling party are killed or exiled.