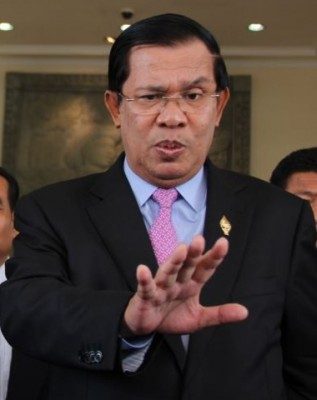 A youtube video uploaded by user “Khmer Troop” plays a recording of the hacking of http://samdechhunsen.gov.kh/, which was created to promote the PM’s official activities. Sitting atop the homepage is an edited image of Hun Sen, crowned the “King of Facebook”. This is most likely a reference to the PM’s ongoing online spats with exiled opposition leader Sam Rainsy, and his attempts to garner popularity and influence via social media (some suggest Hun Sen has even purchased thousands of Facebook likes).

A still from the video credited to the internet group Anonymous

Below Hun Sen lie dozens of images depicting government brutality and graphic crackdowns on protesters. According to Cambodia Daily, the photos include “images of factional fighting in 1997, attacks on protesters following the disputed 2013 election, the deadly shooting of demonstrators in early 2014 and the beating of opposition lawmakers outside the National Assembly last year.” They also document violent land evictions, illegal logging activities, assassinated union leader Chea Vichea and environmental activist Chut Wutty.

Cambodian media is reporting that the hackers also added an artificial voiceover to the website, warning the incident was only the “first blow” against Hun Sen and threatening to reveal further damaging information against the Prime Minister.

“Samdech uses power just as he wants to by hurting other people… all these issues make people angry… if Samdech continues to cause problems, I will release it, I will make my second blow or slap to make Samdech wake up and be embarrassed… but if Samdech can turn over a new leaf… and stop causing problems, I will not release it.”

The website was soon restored to its original condition. The “King of Facebook” took to Facebook to denounce the attack, stating “No matter where the perpetrators come from, they must take responsibility before national and international law.” He also linked the incident to the opposition group, claiming they always find “wicked ways” to attack his reputation. An opposition spokesman refuted the accusation, stating they knew nothing about the attack and that “The prime minister has many opponents.”

Internet security researcher Niklas Femerstrand believes the actual hacking involved was unsophisticated and largely a result of the government neglecting to update its software, following a security flaw publicised in December. Cambodia’s IT crimes expert group is currently investigating the source of the breach.