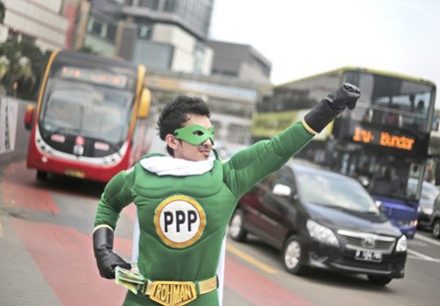 Campaign warriors we salute you

Well the results are in. We’ve got (relative) winners (Nasdem, PKS), we’ve got losers (PDI-P). Mainly, we’ve got a whole lotta political fragmentation.

At New Mandala Indonesia Votes we’re closing up for the night, bellies full of noodles, cheap chocolate and err…beverages. Ahem.

Before the parties start the wheeling and dealing towards making presidential coalitions towards the 9 July elections, let’s take a moment to thank the little people – the campaigners and supporters who rallied with gaiety and much body paint to get them there.

Before the election, some polls put the scandal-beleaguered PKS as low as three to four per cent.

What with the imprisonment of party president Luthfi Hasan Ishaaq for fiddling the country’s beef imports last year, one editorial even asked if the party was doomed for extinction?

Under the leadership of Anis Matta, known for his signature blue jeans and snappy font decisions, the party rallied its army of silver miners to dig them out of the electoral hole.

The quick count has them at 6.9 per cent, not too shabby considering their 7.3 per cent share in 2009. PKS Tin Men we salute you. Bringing up the rear, Hanura ultimately sets its sights low and were politically dwarfed with a mere five to six per cent in tonight’s final quick poll. PPP did reasonably this election, with the final quick poll giving them a one per cent rise on the last elections to nearly seven per cent.

This modest success has done little to quell the open in-fighting within PPP after party chairman Suryadharma Ali singlehandedly and spectacularly aligned the party with Prabowo’s Gerindra during the campaign. With PDI-P tipped to win the presidentials, PPP isn’t keen on spending the next five years in opposition. Get off the highway PPP Superhero, you’re gonna get hit by a bus. There were no real surprises in the Gerindra vote. Polling had Gerindra at 12 per cent, and they were bang on the mark. Prabowo Subianto values loyalty from his supporters and that’s what he got, plus a whole lotta body paint. Call it the equestrian effect. Uncomfortable Gerindra man, we salute you. The big story of these elections was the failure of PDI-P to blitzkrieg past the 20 per cent of legislative seats threshold needed to singlehandedly put forward a presidential candidate.

This was no way due to a failure to launch on the part of PDI-P whacked out campaigners, who rallied in droves, complete with paper mache bull heads, John Malkovich Jokowi masks and raunchy female dancers jiggling with what looked suspiciously like butt pads.

Was it the fluro parachute pants?