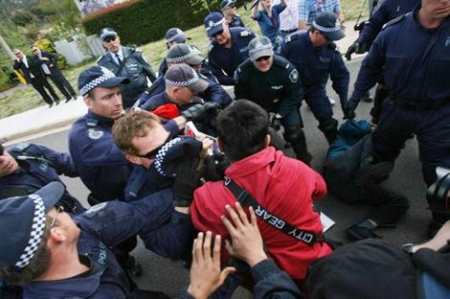 It’s not Rangoon but democracy loving Canberra. The Sydney Morning Herald (the source of this photo) reports:

A protest of about 60 Burmese pro-democracy activists were met with heavy police presence at a protest outside the Burmese embassy in Canberra this afternoon. Chanting “we want democracy” and “free Burma”, the group of mainly older Burmese-Australian men first sat in an area across a closed road from the Burmese embassy, then sat down on the closed road. About 30 federal police officers and two police dogs tried to disperse the group. One protester was thrown to the ground and taken away. Protester Thomas Soe said police had been heavy handed. “All we wanted to do was a peaceful demonstration, all we wanted to do was stand in front of the embassy,” he said. Police denied they had been heavy-handed. The protest then marched to the Chinese embassy, where protesters yelled: “Chinese government, shame on you”.