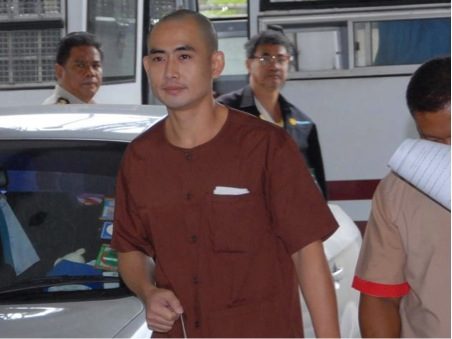 Captain Nat and the wheels of Thai justice In Tor Chor Dor Vol. 2, chapter 6 (“Crimes and Human Rights Abuses”), I described in considerable detail the case of a group of Border Patrol Police officers, dubbed the ‘BPP Gang’ by the media, which engaged in an organised campaign of abduction, extortion, torture and other serious abuses. Their arrests in January-February 2008 became a national event. Around 40 BPP officers were incriminated, including their so-called ‘leader’, Captain Nat Chonnithiwanit. The victims, of whom there may have been around 200 over a period of at least three years, were subjected to electric shocks, suffocated with plastic bags, severely beaten, and in some cases both mentally traumatised and physically maimed. They were mainly respectable, middle-class, law-abiding, fairly well-off Thai citizens, who would normally have expected protection from the police against this sort of criminal conduct.

The subsequent trials, sentences, appeals and commutations provide a fascinating glimpse at the workings of the Thai justice system. It is a very slow and fitful process. Many members of the gang have yet to be brought to trial, six years after they were initially charged with one or more offences. In Nat’s own case, several charges are yet to be heard by the courts, including those relating to the abduction and extortion of a wealthy Thai businesswoman, Pienjit Peungon, in Bangkok in January 2008; her courage and credibility prompted the arrest of Nat and the first batch of his colleagues.

On 24 July 2009, the Southern Bangkok Criminal Court sentenced Captain Nat and seven other former BPP men to three years and four months in jail for extorting money from a couple in Bangkok in January 2008. The court initially sentenced the eight to five years in jail but commuted the penalty by one third after they cooperated with the court during the trial.

On 8 December 2009, Nat and seven other BPP associates were convicted by the Taling Chan District Court in Bangkok in connection with a case involving a silver jewelry seller in Bangkok in February 2007. They were found guilty of assault with weapons, illegal detention, and extortion, and each sentenced to five years imprisonment. On 6 December 2011, however, the Appeal Court quashed the convictions of Nat and these seven other officers. It determined that ‘the evidence presented in the case lacked weight’.

The nullifying of the December 2009 convictions caused many blog pundits to scoff at the Thai justice system, particularly where police officers are involved. Some argued that Captain Nat and his associates would soon be walking free. However, such observations were premature. Since 2013, Nat has had a further 39 years imprisonment added to his July 2009 figure (amounting to 42 years and four months).

On 30 September 2013, Bangkok’s Criminal Court found Nat and nine others guilty of assaulting four police officers from Chiang Mai and forcing them to confess to drug crimes in October 2007. The Court gave each of the ten accused a 10-year jail term, but halved the term for Nat and two others for their ‘useful confessions’, while the rest received reduced jail terms of six years and eight months. The court also ordered them to pay 100,000 Baht compensation (plus 7.5 per cent annual interest) to each of their victims.

On 17 December 2013, the Criminal Court sentenced Nat to 22 years in prison for robbery and rape of a woman in Bangkok. Seven associates were sentenced to 12 years for ‘dishonestly performing their duties, armed robbery and illegal detention of a person’. Nat received the additional 10 years for raping the woman while she was being detained. Nat and two of the others were also sentenced to another five years each for extortion of four other victims.

On 27 February 2014, the Criminal Court sentenced Nat to seven years in prison, and four of his team to five years, for abuse of authority and assault. On 6-7 January 2007, they had taken a husband and wife to the HQ of the BPP’s 42nd Sub-Division and tortured them until they paid 200,000 Baht for their release.

It is possible that some of these sentences could be reduced on appeal, but it is also likely that Nat and some of the others will receive substantial sentences from further charges still to come to trial. Nat, who was 28 years old at the time of his arrest, remains cherubic-looking after more than six years in jail. But he will probably spend a large part of the rest of his life behind bars. Hopefully, anyway.

In another case described in Tor Chor Dor Vol. 2, a former BPP officer, Sub-Lieutenant Jittipong Sochai, who was arrested for drug offences on 12 December 2012, was found guilty and sentenced by the Criminal Court on 23 September 2014. Sub-Lieutenant Jittipong was one of five members of the Ouan police station in Nan Province who were arrested in Ayutthaya with more than one million methamphetamine tablets in their police car. Jittipong, then the deputy crime suppression chief at the Ouan station, was allegedly the ring-leader. He had previously served as a BPP officer in Chiang Mai, where he ‘had been involved with a major drug trafficking group’, precipitating his transfer to the Provincial Police in Nan. The Criminal Court initially sentenced Jittipong to death, but commuted the sentence to life imprisonment because of his ‘useful testimony’.

Professor Des Ball is the author of the two volume Tor Chor Dor: Thailand’s Border Patrol Police. In September 2014 he received an Order of Australia for his distinguished lifetime of service to defence and security studies.