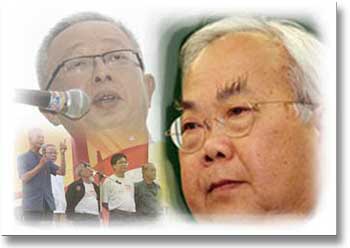 Chai-anan Samudavanija’s recent op-ed in Manager may provide a clue to his attempt to develop his theory of the Thai state: the Three-Dimensional State Model. In short, the Model argues that a regime, no matter what type of power distribution it has, must pursue at least three goals in order to maintain its power: security, development,and participation. Chai-anan argues that security occupies the top priority of the Thai state’s agenda, whist participation (or democracy) is subordinated.

In this opinion piece, Chai-anan proposes that Thai people should adopt ‘sufficiency democracy’ in addition to ‘sufficiency economy’. He argues that Thailand’s democracy creates conflicts in society instead of acting as a conflict resolution mechanism.

Chai-anan argues that democracy works better in other countries because of their long historical experiences, especially the struggle against colonialism. Independence movements encouraged close contact between the movement’s leaders and their supporters.

Chai-anan suggests that Thailand only experiences one type of democratic system through representation. Competition is the key to the state’s power in this system. This is detrimental to social harmony and reconciliation. Those who are economicallywell-off benefit most. This is evident in rampant vote-buying and quotas for many ministerial posts.

Therefore, Chai-anan proposes that Thailand should not pay too much attention to rectifying its political structure. What Thailand can do is to focus on promoting community activities whereby people can work together towards common goals. This doesn’t have to be political or something involving money but something basic and close to their daily problem solving. This community-based participation – not democracy – leads to reconciliation.

He concludes that Thailand should adopt sufficiency as the basis of democratic development. Working together for collective goals comes first. People will learn among each other and know who should be their leaders. They will choose them to be their representatives. Then, democracy comes later.

Chai-anan’s point is not complicated when compared to his seminal Three-Dimensional State Model. His view may reflect three dimensions of ideas that are present in a large group of Thai intellectuals today. First, it is part of a reaction to capitalist economic development at least since the late 1980s when Thailand experienced its economic boom. This anti-capitalist thinking peaked in the aftermath of the 1997 financial crisis. Second, Chai-anan is reflecting a bottom-up approach to democracy and, apparently, a reaction to the rise of the Thai Rak Thai party under Thaksin. Lastly, a nationalist rationale – Thailand’s uniqueness – is the key to negating ‘external’ elements in Thailand’s political economy.