The passing of Chin Peng in Bangkok on 16 September 2013 brings to an end one of the longest of Asian political biographies. Chin Peng became the Secretary General and effective leader of the Malayan Communist Party (MCP), the country’s oldest political party, in 1947 when he was only 22. He retained that position for the next 60 years, indeed until his death, even though the party became divided, moribund and irrelevant around him. Long after communism ceased to be a threat to Malaysia he was refused permission to return to the country of his birth (unless he publicly recanted all his views) and so he remained an exile.

The scars of that period have not healed. The role of communists in fighting first Japanese and later British for control of Malaya is scarcely recognised in Malaysian textbooks and public memory. Many Chinese and a few radical Malays remain unnecessarily alienated from the Malaysian establishment, and it from them, while an important but polarised chapter in Malaysia-China relations remains off the table, unable to be discussed by either side. Chin Peng himself spent much of his later life attempting to explain and defend what he called ‘My Side of History’. One hopes that his removal from the scene, after having his say, may make the integration of a very divided history a little easier.

Just why Chin Peng came to lead Malayan communism so early in his life has much to do with accidents of his family upbringing and schooling. Although essentially educated in the Chinese medium like the overwhelming majority of Malayan communist recruits, he had just enough English education at the beginning and end of this period to be comfortable, if a little hesitant, in English. His elder brother and his equally committed communist wife were English-educated. In the crisis that endangered the party in 1947, when its long-term Secretary General Lai Tek was discovered to have worked for both Japanese and British and was assassinated by the Party, Chin Peng was well placed politically to succeed, not least because his English enabled him to talk to other communities. Indeed the early years of his leadership marked a striking reorientation of the Party to being ‘Malayan’, and looking for non-Chinese recruits, rather than a branch of the Chinese party.

As a teenager he had already taken a leading part in the communist-supported Malayan People’s Anti-Japanese Army (MPAJA), the most effective armed resistance to the Japanese in Malaya. With a half-dozen other communists in the resistance he was decorated by Mountbatten in 1946. But in May 1948, as the Federation of Malaya structure disappointed non-Malay hopes for a post-war democratic order, as the British increasingly cracked down on left-wing activists, and as both sides in what became the global Cold War hardened their international stance, Chin Peng led the communists back to the jungle in armed insurrection. The Malayan Emergency which followed was a long and ruinous guerilla struggle, involving troops from Britain, Australia and New Zealand as well as Malaya. Progress to independence was speeded to deprive the communists of their most powerful anti-colonial argument. Once the government that would carry the Federation of Malaya to independence was in place, led by the genial prince Tunku Abdul Rahman, a meeting was arranged at which the Tunku could try to persuade Chin Peng to give up the struggle since its nominal object of independence was achieved. Chin Peng proved clear and persuasive at the 1955 Baling talks in Kedah, but insisted that he could only bring his men out of the jungle to lay down their arms if they were allowed to enter the political process as a legal party. Under British advice the Tunku would not agree to this, or indeed to any significant concession to the communists once they surrendered. The talks failed, and all they had changed was to provide the Malayan/Malaysian public with an image of their “enemy”–a slim soft-spoken figure who vanished from sight as suddenly as he arrived. Malaya duly became independent in 1957, to be followed in 1963 by a broader Malaysia involving also Chinese-majority Singapore and the multi-ethnic British Borneo territories. The fortunes of the MCP in the jungle gradually declined in face of an effective containment strategy, and an increasingly prosperous independent Malaya. The MCP withdrew its central operations base to the Thai border region in 1953, to ease the military pressure. At the end of 1960, with his force shrunk from over 7,000 to fewer than 2,000 men, Chin Peng left his jungle hideout for a mammoth journey to Beijing via Thailand, Laos and northern Vietnam. There he was an honoured guest of the Chinese government for almost 20 years, though still controlling the Party’s radio station in Hunan and by proxies the party on the Thai border. This was a troubled time, including the Cultural Revolution in China and its counterproductive extremism in relations with the rest of the world. Chin Peng survived, but the unity of his party did not. The internal purges in the party became severe in the late 1960s especially, with perhaps 200 executions of alleged spies and traitors. In 1970 two factions broke away from the Chin Peng mainstream, forming the Revolutionary Faction and the Marxist-Leninist Faction respectively. In 1983 they merged to form the Malaysian Communist Party, recognising the new politics of Malaysia as the older party would not. China’s growing warmth towards Malaysia after diplomatic relations were established in 1974 meant that the MCP no longer had real support from Beijing for its armed struggle. Reconciliation should have occurred then, but each of the three parties –Chin Peng and the Chinese and Malaysian governments–had their own reasons for preferring a frozen status quo to any public change of position. Only in December 1989 did the Thais broker a peace agreement between the Malaysian Government and the MCP, whereby the few hundred remaining communists laid down their arms and settled as cultivators in southern Thailand. Chin Peng was no longer an asset to China, and lived thereafter primarily in Thailand.

Long-standing MCP habits of illegality and clandestinity were gradually overcome in the 1990s as governments lost their fear of communism, and Chin Peng himself sought to make his case. Some international journalists found their way to him through Thai military contacts, and articles began appearing from 1997. One of the enterprising journalists was Bangkok-based Australian Tony Paul. He finally managed to meet Chin Peng at the British Club in Bangkok in 1997, and encouraged his interest in writing his memoirs, in a place better served with libraries than his normal residence near Haadyai. On his behalf Tony Paul contacted David Chandler at Monash, and then Merle Ricklefs at ANU, who delegated the matter to me. As a result Chin Peng made his first visit to Australia and New Zealand (having nephews both in Sydney and Auckland), in the course of which I took him to lunch in Canberra on 3 February 1998. He was remarkably affable, charming and thoughtful, revealing nothing of the steely side that must have enabled him to survive the lurches in the Chinese and Soviet lines over his time in charge of Malayan communism. I invited him to return for a month as a visitor at ANU working on his memoirs, in return for which we would hope for a rather intense seminar working over the history of the MCP with some experts.

A year later he was installed in the Coombs Building at ANU behind a door discreetly labeled Mr B.H. Ong. The ANU did not fund his visit, so he stayed with Mr C.C. Chin, omniscient chronicler of the MCP, who at that time was hoping to write an ANU PhD on the subject under my supervision. He charmed both his old antagonists and the students who gathered to hear him reminisce about “Why I became a communist”. On 22-23 February we organised a workshop under the auspices of the newly-formed Centre for the Study of the Chinese Southern Diaspora, where some 20 scholars grilled him about the key decisions and turning points of his long career. Everything would be on the table, he agreed, except the two most sensitive areas for him – the internal disputes of the party and its relations with the Chinese Party. Among those gathered for this remarkable occasion were not only the leading historians of the Malayan Emergency and the MCP –Cheah Boon Kheng, Yoji Akashi, Peter Edwards, Hara Fujio, Anthony Short, Richard Stubbs and Yong Chin Fatt–but several participants who had fought against him, notably Lt.General John Coates of the Australian Army, Leon Comber of the Special Branch, Malayan Police, and John Leary of the Malayan Scouts. The exchanges were cordial and fascinating. On the whole his memory was better that most of those in the room, and his thoughtfulness in reflecting on the issues was second to none. 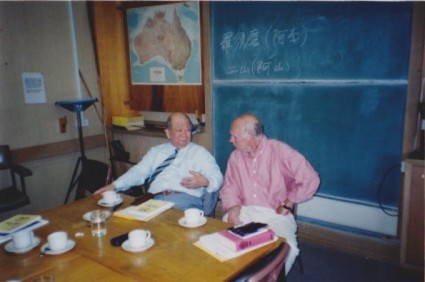 At the end of a remarkable two days of exchanges, revelations, and critiques, Chin Peng made some interesting personal observations.

Since the beginning of the ‘90s I think and think it over whether I made mistakes or not, whether my belief in communism is wrong or not. …. At least I think my conviction to seek an equal society, that was what communism meant–to seek an equal and just society–I think that is not wrong. …And I think that human society will move on. It will take perhaps another millennium to achieve this fully, or to fundamentally achieve this.

Secondly, about the military defeat…

We were defeated in a sense, we did not realise our goal to set up a government dominated by communists. Or, in our terms, a people’s democracy. But we didn’t [experience] defeat in forcing the British to grant independence to Malaya. Without our struggle, I don’t think the British would grant independence to Malaya. Or it will be many years later…. I don’t think we were humiliated. At least I never surrender, and at least I feel proud, not for me, for our movement, for all those supporters. We can carry on a struggle, a military struggle for twelve years against a major power…This is the longest, the largest scale guerilla warfare in the British Empire, in the twentieth century. [1]

Chin Peng had shown that he was as adept at handling a group of expert academic antagonists as his own hardened guerrillas and the international forces ranged against him. Although the transcript of this exchange was eventually published, he also sought a more controlled version of his story, as related to Ian Ward and Norma Miraflow in My Side of History (Singapore: Media Masters, 2003). In October 2004 he was able to visit Singapore, to give a seminar and quietly meet the next most enduring regional politician, Lee Kuan Yew. That was also the last time I would see him. But despite several attempts he was never able to return to Malaysia.

Anthony Reid is Emeritus Professor and Visiting Fellow at the Department of Political & Social Change, School of International, Political & Strategic Studies at the Australian National University.